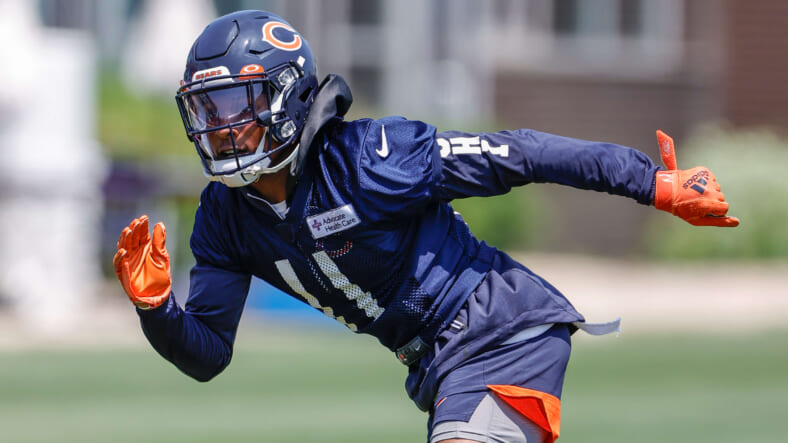 As the Chicago Bears report to training camp in exactly two weeks and the wide receiver position is perhaps the most intriguing on the offense. Besides Allen Robinson, the Bears feature 2020 fifth-round pick, Darnell Mooney, as well as fourth-year wide receiver Anthony Miller. Add in speedsters Damiere Byrd and Marquise Goodwin and head coach Matt Nagy is looking to have his offense take another step forward with quarterbacks Andy Dalton and Justin Fields.

As the Bears report to Halas Hall, what are some questions at the wide receiver position? Let’s find out.

1) Can Anthony Miller finally live up to the draft status?

Heading into 2021, Miller is on the Bears roster bubble with one final shot to prove that he belongs with the Bears. Year three saw Miller catch 49 receptions for 485 yards but just two touchdowns. Miller should be guaranteed a roster spot, however, to truly make an impact, he’ll need to prove that he’s ready to go the extra mile to really make a serious case for getting some legitimate playing time.

Mooney’s emergence last season wasn’t good news for Miller, who essentially lost the starting job. Chicago is still searching for a productive slot wide receiver, meaning the opportunity for Miller to turn his career around still exists, perhaps more than most are willing to admit.

2) Will Byrd and Goodwin push for a starting spot?

Bears head coach Matt Nagy wants speed on offense, the main reason Goodwin and Byrd were brought in. Goodwin opted out of the 2020 season due to COVID concerns but when he last played in 2019, he averaged 15.5 yards per reception, showing off his big-play ability. Byrd spent last season with the New England Patriots, totaling 47 receptions for 604 yards, averaging 12.9 yards per reception.

With uncertainty at who will be the starting slot WR for the Chicago, it’s quite possible Goodwin or Byrd push for a starting spot, especially if Miller doesn’t perform. Beyond Robinson and Mooney, the competition at WR is wide open, giving Byrd and Goodwin an equal chance of winning, especially if Chicago opts to run more three-receiver sets on offense, grouped with 11 personnel heading into 2021.

3) What will the duo of Robinson and Mooney accomplish in 2021?

A year after combining for 163 receptions, 1881 yards, and 10 touchdowns, the duo of Robinson and Mooney could see a major jump due to more consistent quarterback play from Andy Dalton and Justin Fields. Every sign coming from Halas Hall throughout OTA’s and minicamp seems to signal that Nagy wants to run a pass-first offense, giving both wide receivers more opportunities.

Dalton and Fields have both shown the ability to hit the deep ball consistently enough to the point where Mooney’s speed will finally be used to the fullest extent. Both quarterbacks also showcase good accuracy and the ability to fit throws into tight windows, giving Robinson a chance on each play.

Robinson and Mooney could certainly burst onto the scene in 2021, becoming one of the NFL’s top wide receiver duos. The talent and potential was on display throughout 2020 but with better decision-making at quarterback, both players should see a reasonable jump in production.