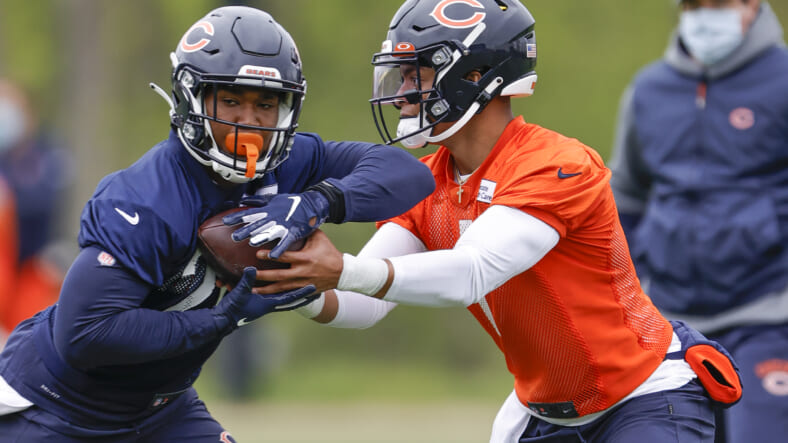 Sunday afternoon proved to be fruitful for Chicago Bears fans. Not only did the Bears come away with a victory but Chicago also got an extended look at rookie quarterback Justin Fields for the first time in the regular season with veteran Andy Dalton leaving the game due to a knee injury.

Fields playing a majority of the game doesn’t mean he’ll be the starter moving forward but the Bears coaching staff now has to make a decision to make: Should the Bears continue to roll with Dalton if healthy or start Fields and bring the future to the present? The final call with be made by head coach Matt Nagy but Fields performance on Sunday while leading the offense could be enough to name the 11th overall pick the starter.

Chicago’s offense showed plenty of positives on Sunday, including the ability to consistently move the ball through the air with a vertical passing game but for every positive, there seemed to be a negative. Wide receivers Allen Robinson and Darnell Mooney each dropped two touchdown passes that would’ve iced the game by at least two possessions.

Fields’ mobility was apparent throughout the afternoon, as the rookie rushed 10 times for 31 yards, including a 10-yard rush with 2:55 remaining in the fourth quarter to set the Bears up with a first-down to end the game. Chicago did run some RPO looks, ensuring that Cincinnati’s defense would need to account for running back David Montgomery on every play. Montgomery, who rushed 20 times for 61 yards had three receptions for 18 yards, impacting Chicago’s passing attack during a busy afternoon for the third-year running back.

Overall, Chicago’s offense put together a solid enough performance to warrant being able to compete with any opponent. The Bears may not be explosive as Nagy wants to be just yet, something that will come with time but week 2 was encouraging for both the present and future.