Assessing Robert Quinn’s role with the Chicago Bears in 2021 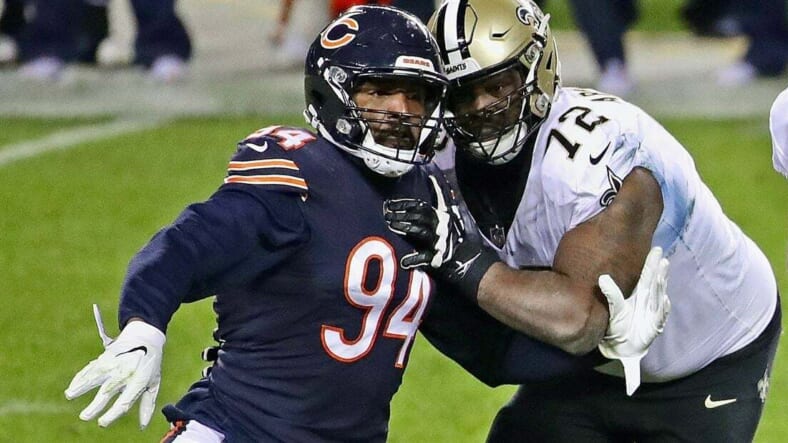 Heading into 2021, the Chicago Bears seem to have a problem on their hands: What to do with 11th-year veteran Robert Quinn, who signed a five-year $70M deal in free agency last offseason. Quinn’s first season would disappoint with just two sacks and six quarterback hits in 13 starts.

Much of Quinn’s struggles were attributed to health, however, the Bears know how good Quinn, who had 80.5 sacks prior to joining Chicago, can be.Â Heading into 2021, the Bears appear to have different plans to utilize a player many label a pure pass rusher.

“Robert is a guy that has played in this league a long time and he’s had a lot of good seasons, times where he’s lead the NFL in sacks and he has his way of doing things,” said head coach Matt Nagy via the Bears official YouTube Channel. “And so, I think that’s where you’re going to see Coach Desai really try to use Robert in the way that Robert’s used to being used.”

Quinn has traditionally been labeled as a player who’s an ideal fit in a 4-3 defense as a defensive end with his hand in the dirt. Throughout much of last season, Quinn was solely an outside linebacker, requiring him to be a standup pass rusher.

â€œEveryone is on the same page, and we understand what I need and what the team needs from me,â€ Quinn said via Adam Hoge of NBC Sports Chicago. â€œIâ€™ll just leave it at that. They know where Iâ€™m best at, and weâ€™ll just keep it there.â€

For Chicago to maximize the investment that was made, Quinn should see additional reps with his hand in the dirt, specifically being a defensive end. Chicago can afford to utilize Quinn in this manner for two reasons. First, the Bears added veteran Jeremiah Attaochu but also feature second-year player Trevis Gipson, who many expect to take a major jump going into 2021.

Quinn’s performance will be one to monitor throughout the duration of training camp but the Bears also need to acknowledge that Quinn needs to have a defined role in order to truly be successful, despite his limitations that were on display throughout last season.