31 questions to Bears camp: What is Desai’s defensive philosophy? 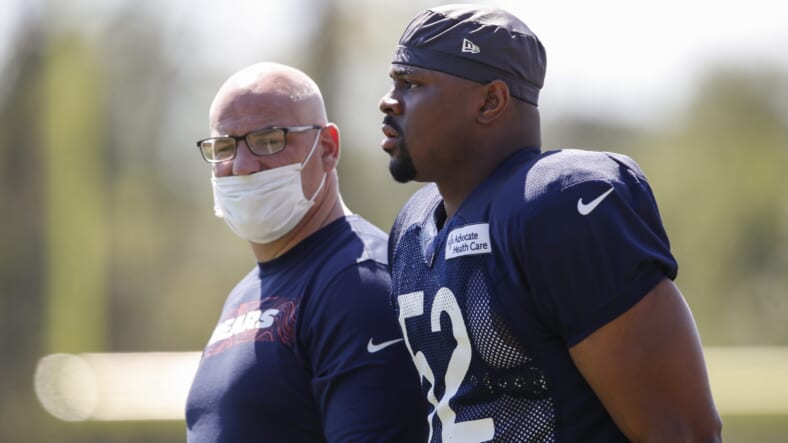 When the Chicago Bears officially begin training camp at Halas Hall during the final week of July, the Sean Desai era will kickoff as the Bears’ starting defense will be fully present. Players like Roquan Smith, Eddie Jackson, and Tashaun Gipson have praised Desai this offseason, generating excitement among the Bears fanbase.

Desai, a Vic Fangio disciple, continues a trend across the NFL where younger defensive minds continue to deploy more aggressive defensive schemes, something that should benefit a defense that includes players like Khalil Mack.

â€œI think Sean is one of the brighter young minds in the game so to have him as my defensive coordinator, I definitely understand what he can bring to the table,â€Â Gipson said via the Bears official YouTube channel. â€œAnd with the talent he got on defense, itâ€™s going to be a beautiful thing to see.”

â€œA guy whoâ€™s going to let us playmakers make plays. And thatâ€™s one of the things, heâ€™s not going to handicap nobody on defense,â€ Gipson said. â€œI think that with a guy like Sean, you see that everyone gonâ€™ be able to make plays, from the safeties to the corners to the linebackers to the d-line and when you have a defense thatâ€™s rich in talent like the Chicago Bears defense, where you got guys capable of changing the game on every level, having a guy like Sean is huge because you have a guy who can truly put every guy in position to make a game-changing play at some point in the game.â€

While Chicago’s defense does look older on paper, players like Mack are still in their prime, giving the Bears an opportunity to maximize a defense that many still consider to be the strength of Chicago’s roster.

â€œThe good thing about our teaching philosophies is that we try and make sure guys know multiple spots,â€Â Desai said via the Bears official Youtube page. â€œThat helps us on gameday with the depth and thatâ€™s been a philosophy of mine and our defensive staff since the beginning.â€

As Chicago gets ready to report to training camp, Desai’s defensive philosophy will be one that allows players to play freely, helping Chicago’s defense to rise to the top.