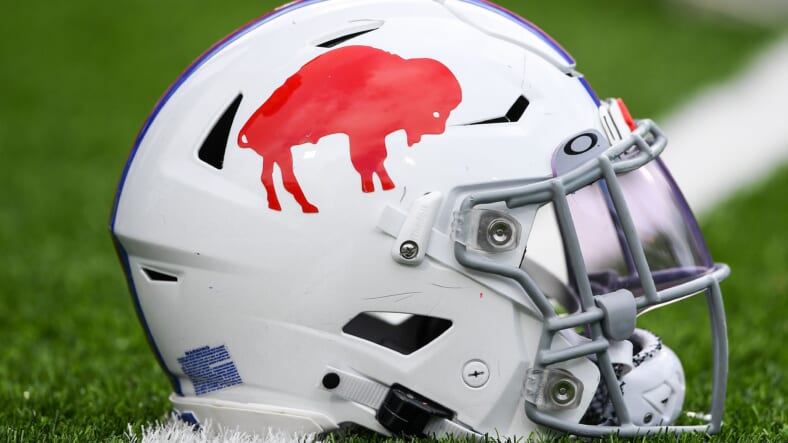 Nov 3, 2019; Orchard Park, NY, USA; General view of a Buffalo Bills helmet on the field prior to the game against the Washington Redskins at New Era Field. Mandatory Credit: Rich Barnes-USA TODAY Sports

Precipitation and the wee hours of Sunday morning were no match for Buffalo Bills fans welcoming their team home.

The Buffalo Bills received a welcome fit for division champions as they arrived home from Denver early Sunday morning.

A contingent of fans, many of whom appeared to adorned in masks and face coverings, braved darkness and rain to greet the Bills at Buffalo Niagara International Airport upon their return from a Week 15 win in Denver. The victory allowed the Bills (11-3) to clinch their third playoff berth over the last four seasons and their first AFC East division title since 1995.

Bills fans, known as “Bills Mafia”, have been known to gather at the airport after big victories on the road, most recently doing so when the team returned from a Sunday night win in Pittsburgh last season. Social distancing protocols in the wake of the ongoing health crisis have prevented Bills Mafia, often referred to as one of the most entertaining and passionate fanbases in the NFL, from visiting Bills Stadium in Orchard Park this season. But they apparently sought to capture the game day experience, if only for a short while, after this monumental occasion.

With games in Orchard Park staged in front of empty stands, many newcomers to the team experienced the passion of Bills Mafia for the first time.

What we just walked off the plane too was absolutely INSANE!! Finally got to meet #BillsMafia ain’t NOTHING LIKE IT!!!

What a surreal feeling being welcomed home by the #BillsMafia tonight ??

Among the chants uttered by the crowd were “Super Bowl” and “MVP”, the latter in reference to quarterback Josh Allen, who referred to the gathering as “wild” in his Instagram story. In other social media shares, Dion Dawkins and Josh Norman documented their drive out, where some overzealous, unmasked fans get somewhat close to their open windows. Trumaine Edmunds also shared his exit, though he kept his windows up.

Now a #Bills fan screaming directly in Josh Norman’s face… this is something else. pic.twitter.com/8fqV65EMZl

Despite this, many fans appeared to be masked at the event. A socially distanced viewing party of Saturday’s game, a 48-19 win over the Denver Broncos, was held at the Transit Drive-In, which also hosted a viewing of the University of Buffalo’s football tilt in the Mid-American Conference Championship Game in Detroit the night before. The Bulls fell to Ball State 38-28.

The Bills return to action next Monday night against the New England Patriots (8:15 p.m. ET, ESPN) before their regular-season finale in Orchard Park on January 3 against Miami.