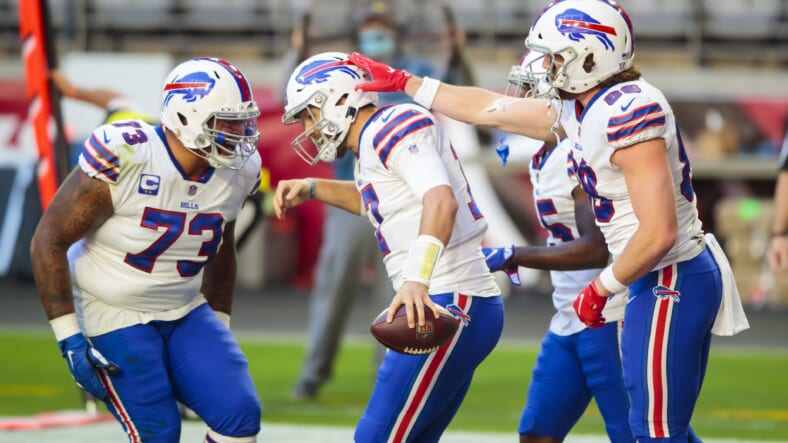 Baltimore’s Monday night thriller denied the Buffalo Bills a clinch last week, but there are several simple avenues on the Week 15 slate.

The Buffalo Bills appear to be well on their way to the 2021 NFL playoffs. But, like Han Solo before them…never tell them the odds.

Buffalo (10-3) took care of business on their end when it came to officially punching their ticket to the postseason, topping the Pittsburgh Steelers in a Sunday night showdown at Bills Stadium. Several other factors, namely in the form of losses from New England, Miami, and Las Vegas. The Baltimore Ravens weren’t in the mood to cooperate, however, as their 47-42 thriller over Cleveland on Monday night prevented a letter from forming next to the Bills’ name in the standings. Nonetheless, the odds experts at FiveThirtyEight currently have the Bills at over a 99 percent chance of making the playoffs in their updated playoff ledger.

How can the Bills add those precious percentage points and clinch their third playoff berth in four seasons? The Bills simply need ONE of the following to go down during Week 15 action…

The Bills can return from the Rockies with the sweetest of Christmas gifts if they simply take care of the Denver Broncos in a special Saturday late afternoon game (4:30 p.m. ET, NFL Network). Winning out west hasn’t been too much of a problem for the Bills, who are 3-1 in the Mountain and Pacific time zones this season, the one loss stemming from Kyler Murray and DeAndre Hopkins’ collaborative miracle in Arizona.

The Dolphins (8-5) took the defending champion Chiefs to the brink last Sunday, but it wasn’t enough to buy themselves real estate in the standings. Their ensuing loss has set up a scenario where the Bills’ so-called “magic number” toward their first division title since 1995 is down to one. Thus, a Dolphins loss of any kind will earn the Bills one of the top four seeds. They’ll be taking on a desperate Patriots team whose salvation lies far, far beyond winning out to keep their postseason streak alive on Sunday (1 p.m. ET, CBS).

It’s highly unlikely that the Ravens (8-5) fall to a Jaguars team destined for one of the top two picks in April, though the return of Jacksonville’s Gardner Minshew does make things a tad less certain on Sunday (1 p.m. ET, CBS). A loss in-conference would allow the Bills, should they fail to top Denver on Saturday, to clinch the conference record tiebreaker (Buffalo is 7-2 while Baltimore sits at 5-5).

Other Week 15 Games That Could Affect the Bills

The win over the Steelers last Sunday night secured not only some major style points amongst fans and analysts alike, but the Bills also earn the tiebreaker that trumps them all: the head-to-head victory, which could come up big if Pittsburgh (11-2) carries on this troubling streak of consecutive losses after winning their first 11 games. Many expect them to get back on the right track against the lowly Bengals (2-10-1) in a Monday night divisional match (8:15 p.m. ET, ESPN).

A potential Super Bowl preview in The Big Easy, a Sunday matchup (4:25 p.m. ET, CBS) with a Saints team reeling from last week’s upset loss in Philadelphia will be must-see television from every football perspective. The Chiefs (12-1) have the inside track on the top seed and the only first-round bye in the AFC playoffs, as well as the impenetrable head-to-head tiebreaker over Buffalo. Kansas City can clinch the precious top seed if both the Bills and Steelers lose this week.

The Bills are closing in one being one of the AFC top seeds, but they’ll want to keep a close eye on the AFC South proceedings. With Kansas City pulling away in the race to No. 1, Buffalo would probably want to avoid the fourth slot as best as they possibly can. If they do, the earliest they would play the Chiefs in the playoffs would be the AFC title game. The Titans and Colts each sit at 9-4, with Tennessee holding the tiebreaker through a better divisional record (the teams split their yearly pair).