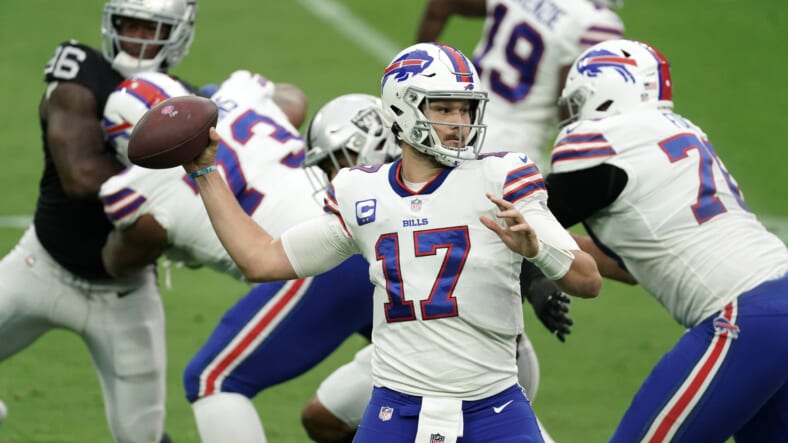 Familiar faces in familiar spots came up huge for the Buffalo Bills, who hit the perfect quarter-mark jackpot in Las Vegas.

Las Vegas may have been too much for the Wolfpack, but there was no undefeated hangover for the Buffalo Bills.

Josh Allen threw for 288 yards and two scores, with 115 of those yards going to Stefon Diggs on six hook-ups. The defense also earned a pair of fumble recoveries en route to a 30-23 victory over the Las Vegas Raiders in their first-ever visit to Allegiant Stadium. With the win, the Bills (4-0) are one of six remaining undefeated teams in the NFL after Week 4.

It was another big step for Diggs, who paces the NFL with 403 receiving yards alongside Seattle’s D.K. Metcalf.

“He plays so strong,” McDermott said of Diggs, per Issac Brekken of The Buffalo News. “Heâ€™s got the mentality and the attitude and it rubs off on our football team.”

Sunday’s matchup featured two of the NFL’s top five teams in third-down conversion rate. Through four weeks, the Raiders and Bills respectively rank third and fifth in the vital category and the two teams lived up to their strong reputation in the department on Sunday. The Bills went 7-for-13 on the down, while Las Vegas countered at 8-for-14 when they had the ball.

Buffalo had an early opportunity to show off that prowess. After converting two first downs on their opening set (including Josh Allen’s 26-yard score to Gabriel Davis), the Bills held a 7-3 lead but a tenuous 13 yards to go at the cusp of Las Vegas territory. Allen threw short of the sticks, but Isaiah McKenzie navigated through traffic to earn a pivotal first down. McKenzie’s elusiveness helped him reach the imaginary yellow line. But the Bills’ non-ball carrying skill players, namely Diggs, John Brown, and Devin Singletary got in the way of pursuing defenders to allow McKenzie the extra steps necessary to get the first.

Five plays later, another third down led to paydirt, as Allen found Cole Beasley from 11 yards out, giving the Bills a 14-3 lead in the early stages of the second.

The sight of Jason Witten is one of the few remaining reminders of that classic, uncanny Buffalo choke in an October 2007 Monday night showdown against the Dallas Cowboys. Witten came back to haunt the Bills one last time on Sunday, making his first touchdown grab in a Raiders uniform just before the end of the first half.

Witten’s score is part of what’s becoming a recurring problem in Buffalo: the struggle to cover the tight end. The four receptions for 74 yards between Gerald Everett and Tyler Higbee last weekend only seemed pedestrian after Mike Gesicki had eight grabs for 131. So far, the Bills have been able to withstand the storm. But with a meaty part of the schedule looming…including a Thursday night tilt with Patrick Mahomes, Travis Kelce, and the defending champion Chiefs…they need to solve this problem sooner rather than later to keep the good times rolling.

Buffalo has climbed toward the top of the NFL standings and power rankings thanks to their continued willingness to take risks. That includes their situations on fourth down.Â Through Week 4’s games, the Bills are one of six teams with a perfect conversion rate on fourth down. Of that tally, they’re tied for second with three conversions (only Cincinnati has more at a perfect 6-for-6).

When Las Vegas cut down the lead to 17-16, it felt like they could permanently shift momentum with a stop. But Buffalo trickery, namely an end-around from McKenzie, got things rolling and put a major rut into the Raiders’ comeback plans. The Bills wound up punting on the drive…a holding penalty on the ensuing downs prevented any points…but it provided a strong message to the rest of the league that they’re not going to let fourth-and-short stop them. This is a team that’s willing to take the risks a great team is willing to take.

The Bills’ rise to power has been fueled by a sense of cashing in on opportunities. The biggest chance on Sunday came in the third quarter with the Raider breathing down their necks. Buffalo led 23-16 but stifled a counter when newcomer Josh Norman officially became a member of the Bills by forcing and recovering a Derek Carr fumble. It took only four snaps to cash in, snaps that allowed the Bills to showcase their marriage of homegrown and acquired talent.Â Allen hooked up with Diggs for a 49-yard gain, a leaping grab over Erik Harris that would set up a two-yard score from Devin Singletary that more or less ended any true Las Vegas threats.

The difference between good teams and great teams is that the latter group finds a way to capitalize to the fullest extent on every opportunity. That’s among the many reasons they’re among the remaining undefeated squads and ready to make the leap toward NFL elitehood.