After besting New England, control of the East belongs to the build. There’s work to do, but the team is officially ready for loftier goals.

Last Sunday, it finally happened. The rabbit got to have a bowl of Trix. Wile E. Coyote caught the Road Runner. The Buffalo Bills beat the New England Patriots.

Buffalo is in the midst of a potential stretch of prosperity. Success in the NFL is anything but guaranteed…just ask, say, the conference finalist Jacksonville Jaguars…but the Bills, one of seven AFC teams with a winning record over the past four seasons, have set themselves up well in terms of the league’s long-term landscape. But something was missing, the slaying of a proverbial dragon, a monster that had dominated the lands for years. Buffalo’s first year mingling with the NFL’s elite saw then engage in a pair of competitive matchups with the fearsome Patriots but ultimately fall short on the scoreboard to create a 4-34 tally over nearly two decades of meetings.

But with the chief tormenter, Tom Brady, having absconded for pre-retirement in Tampa Bay and several other key contributors in the area dealing with injuries, inconsistency, or both, the Bills finally best their Foxboro foes. The 24-21 final, earned when Division II Ferris State alum Justin Zimmer stripped the ball from Cam Newton, wasn’t pretty but was enough to build a sizable distance between them and the Flying Elvises. It was a symbolic official passing of the AFC East torch in the eyes of some and the impact of such a win was not lost on the victors.

“Man, that was fun,” Bills defender Jerry Hughes said of the win per John Wawrow of the Associated Press. “It feels good, to be honest with you, to be on the other side of the spectrum, to be watching our offense hit that victory formation. It felt amazing.” 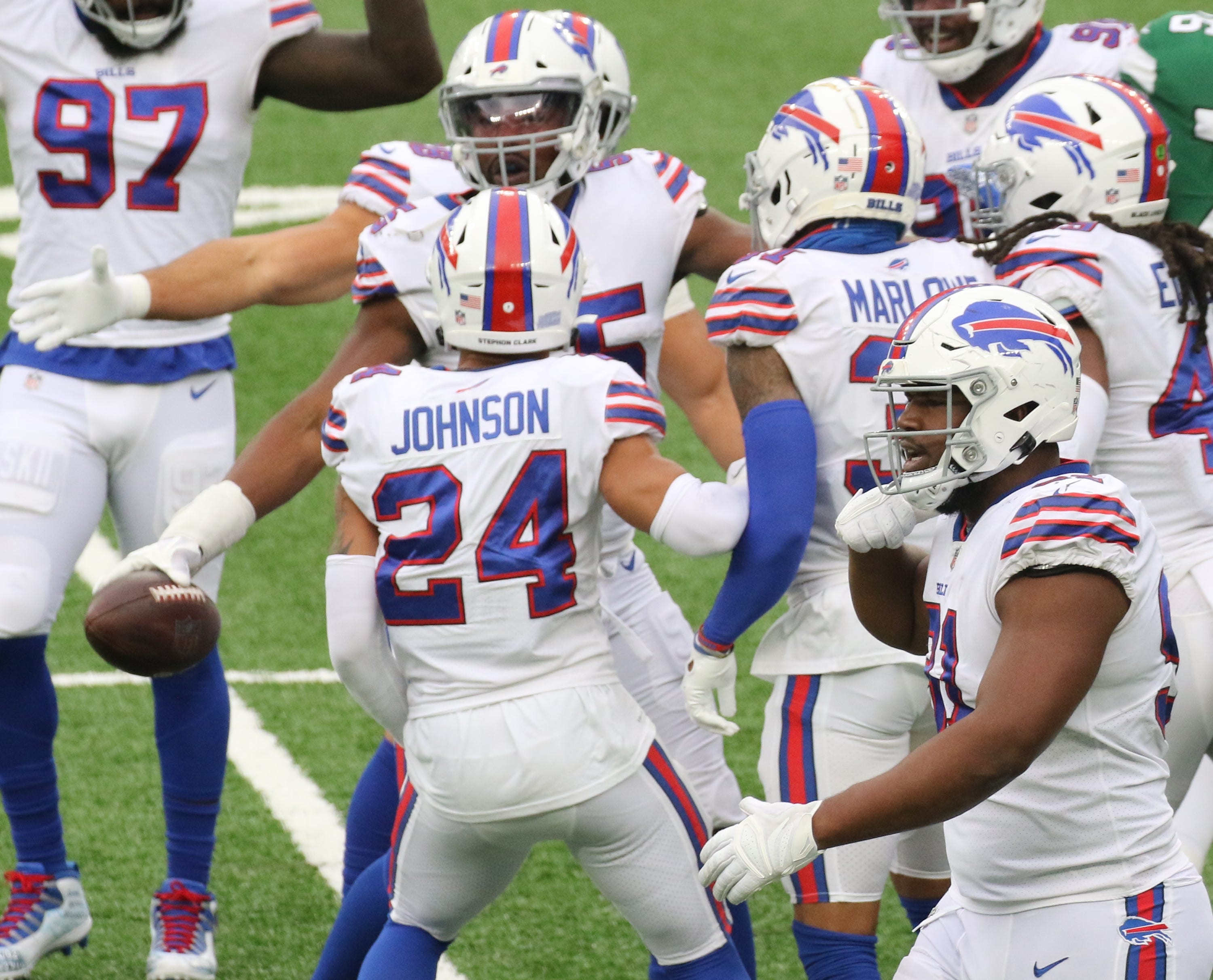 Buffalo (6-2) is now up 3.5 games up on the reeling Patriots and a game-and-a-half ahead of a Maimi Dolphins team that made it clear where its focus is when they sat the effective Ryan Fitzpatrick for future franchise man Tua Tagovailoa. Even if one of their immediate chasers pulls off an improbable…and the Bills own all tiebreakers with a 4-0 mark against divisional foes this season…the 6-2 mark should well sustain them in terms of an expanded playoff picture.

The playoffs seem clear. The division looms large. But the Bills know that this is no time to become complacent, even though they’ve managed to earn a sterling start under complicated circumstances.

“Most coaches would say they want to hit their stride in November, December, when the leaves are coming off the trees,” head coach Sean McDermott said of the team’s intriguing first half, per Mary Margaret Johnson of Informnny.com. “Overall, at the end of the day you’re trying to win one game. Rosters change week to week, lineups change week to week, challenges normally come, and with COVID, we’re trying to find one week wins and do the best you can to put the best lineup out there.”

One checkpoint has been reached. Now, it’s time for this team to set loftier goals for themselves.

As another New York state sensation that wore red and blue once learned, with great power comes great responsibility. The Bills need to set their sights on something higher, something bigger. No longer does the New England demon hover over Western New York. The video boards at Bills Stadium no longer need to highlight the Patriots on the out-of-town-scoreboard. Buffalo has taken care of business and has free reign of the division, at least temporarily.

A de facto reward awaits the Bills in the form of three nationally televised games over the final eight games, and that’s before flexible scheduling kicks in. The Week 14 team matchup with the undefeated Pittsburgh Steelers is currently placed in NBC’s Sunday Night Football package; it would be the first time the peacock network came to visit Buffalo for football reasons since 2007…a game that became a 56-10 shellacking at the hands of the unbeaten-in-the-regular season Patriots.

It’s time for the Bills to defend their newly earned spot amongst the NFL’s elite.

Strong as the Bills have looked, there’s plenty of room for improvement. Despite holding one of the NFL’s best records, they somehow have a negative point differential (-2) thanks to one-sided losses at the hands of Tennessee and Kansas City. The heroics of Zimmer notwithstanding, Buffalo would also like to see some more pressure generated by the pass rush.

“Every week they know they’re the tip of the spear for our defense,” McDermott said of the pressure he’s hoping to generate with the front group, according to Alex Brasky of The Daily News (Batavia). “I’ve enjoyed watching them the past few weeks as we continue to build our defense. Their coordination and their chemistry and how they’re playing – that’s a work in progress at this point.

“Regardless of what type of QB you’re going against, you have to have the front to impact the QB. Your front has to play well every week. You have to control the line of scrimmage on both sides of the ball.”

A trial by fire could be the best thing for the Bills at this point. It ignites this Sunday with a visit from the NFC-leading Seattle Seahawks on Sunday in Orchard Park (1 p.m. ET, Fox). Everywhere the Bills go, there’s going to be a larger spotlight on them. It’s better that they get used to it now rather than later.

Buffalo is worried about the surprises that Seattle and their MVP quarterback, Russell Wilson, have in store for them. They’re ready for such a challenge with both wariness and anticipation.

“(Wilson) does everything well,” cornerback Tre’Davious White said about the challenge to Ashley Holder of WGRZ-TV. “He knows the coverages and what makes the offense go. (There is) nothing he can’t do. He can make every throw on the run and always knows the coverages we are in. He’s the total package and a triple threat.”

Their New England demon exorcised at last, the Bills have earned their spot amongst the NFL’s elite. It’s time to prove they can stay there. Thus far, there’s indeed reason to doubt they can truly stick around. For example, they completed their season sweep against the lowly New York Jets but failed to score a touchdown. They’ve looked suspect against established contenders like the Titans and Chiefs. It’s something that the Bills are aware of…and yet another challenge they welcome.

“Our job is to put together a plan to do the things we need to do just to win a game,” offensive coordinator Brian Daboll remarked, per Sal Maiorana of the Rochester Democrat and Chronicle. “The stats and all that other stuff, the only important one is the letter (W or L). That’s the most important thing to us, and that’s how we approach it.”

“Certainly, we’d like to improve in really every area of our game. We’re only half a season in, so there’s a lot of growth that we all need to have. We’ll just continue to work at it, grind it out and try to improve.”

The challenges of the NFL resemble the villainous Marvel Comics organization Hydra, where it’s said that if one head is cut off, another will take its place. Good teams find a way to tackle these challenges and fully establish their spot among the great teams. The Bills’ former tormenters from New England developed an endless stream of victorious football by tackling these challenges and taking care of business through doing the ordinary things extraordinarily well (as evidenced by their jaw-droppingly strong divisional record since the turn of the century).

Buffalo is handling the latter part. This trial by fire…with Seattle, Pittsburgh, and Arizona all looming large…will be their first chance to truly stick around the NFL’s great squads.