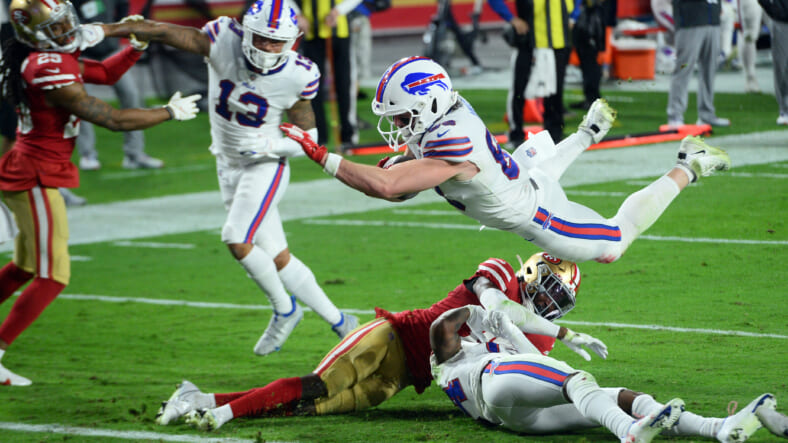 An offensive explosion allowed the Buffalo Bills to exorcise their Glendale demons and come away with a win over the displaced 49ers.

The Buffalo Bills struck prime time, offensive gold against the San Francisco 49ers on Monday night in a most unusual location.

Josh Allen threw for 375 yards and four scores, helping Cole Beasley earned a career-best 130 yards. Micah Hyde and Tre’Davious White also had interceptions as the Bills rolled to a 34-24 victory over the Niners at State Farm Stadium, home of the Arizona Cardinals and one of the most heartbreaking defeats in recent Buffalo memory.Â

The win on Monday broke several dubious records in Buffalo history. It was good for their first win in a Monday night setting since October 1999, and the team also clinched their first pair of consecutive winning seasons since 1998-99. Stefon Diggs’ 92 yards allowed him to hit the plateau of 1,000 for the season, giving the Bills receivers with four digits in back-to-back years for the first time since 2011-12 (both Steve Johnson with John Brown accomplishing the feat last season). Buffalo (9-3) also maintains a one-game lead on Miami for the modern AFC East division lead.

Dawson Knox made this look too easy ?

Knox tied his career-best with four receptions, none more important than a four-yard touchdown reception that gave Buffalo the lead for good. The second-year tight end has now scored touchdowns in back-to-back contests and is turning into a reliable red zone option. It’s perhaps a play that will only gain recognition and accolades in the Bills’ film room this week, but Knox would also come up big on another Buffalo scoring quest. Late in the first half, Knox stepped in front of quarterback hunter Dion Jordan as Allen rolled out to his right. It bought Allen enough time to find Beasley for a 20-yard gain that set the Bills up in San Francisco territory. Two plays later, Tyler Bass booted a 37-yard field goal that created a two-possession lead going into the halftime break.

Cole Beasley hangs on for the score! @BuffaloBills tie it up. #BillsMafia

Jon Feliciano may have rocked Beasley to sleep during first half action on Sunday, but the veteran was anything but sleepy on Sunday. Beasley continues to take on a larger role in the Buffalo offense, enjoying a career-night through mostly early endeavors in the first half. He has been one of the biggest contributors to the Bills’ division title trek, having reached triple digits in four games this season (yet another career-best), including three of the past six. His time couldn’t be much better, as his personal rise has coincided with John Brown being forced to miss some time with an injury.

.@JoshAllenQB can't be stopped. His fourth TD of the night! #BillsMafia

The Bills’ ongoing national tour…they’ll host their first Sunday night game since 2007 next week against Pittsburgh (8:20 p.m. ET, NBC)…is a chance to prove themselves to the NFL at-large. Their roaster features several parties trying to make their professional cases on a wider scale, perhaps none more prominent than Allen, who, despite nearly every analyst suggesting the contrary, is proving himself as one of the most reliable franchise quarterbacks in the league.

Allen certainly got off to a good start in that endeavor, joining Jim Kelly as the only Buffalo representative to throw four touchdowns in a Monday night game and misfiring on only four of his passes. The journey will get a little more difficult next week against what’s sure to be a furious Steelers defense, but it’s one he seems well-equipped for. His name may not be as attractive as that of Patrick Mahomes, but MVP talk might be part of the holiday conversation in Western New York.