Buffalo Bills star acquisition Stefon Diggs: “I could be a lot better” 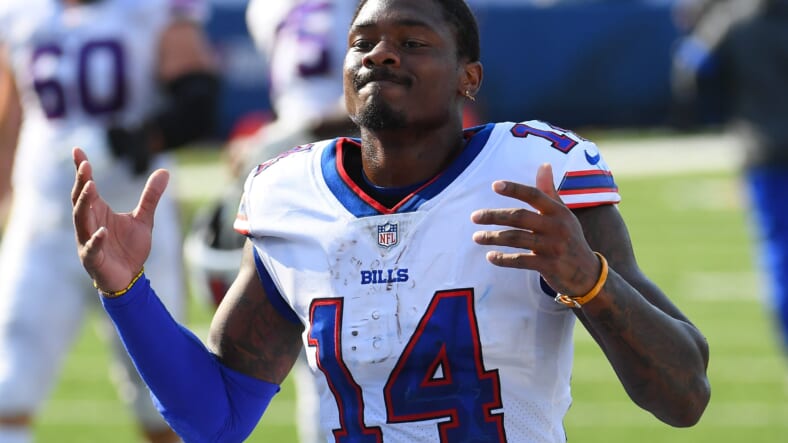 Stefon Diggs has reached heights few Buffalo Bills have seen before. Yet, the Orchard Park newcomer is anything but satisfied.

In the history of the Buffalo Bills, 49 men have earned at least 100 receptions. Only two have reached that landmark in a single season. Eric Moulds first set the record in 2002, adding intrigue to an otherwise meaningless season finale against a two-win squad from Cincinnati.Â It took Stefon Diggs 13 games with a charging buffalo on his helmet to get to triple digits.

Diggs, one of the newest players to enjoy the Western New York experience, has wasted no time in leaving a lasting impression on the Bills’ history books. Moulds may be trending over the next few weeks, if only because Diggs is set to break his single-season franchise marks. The pair are currently tied at the century-mark for the most receptions in franchise history (good enough for Diggs to lead the league entering Week 15), and Diggs will have three weeks to earn the 201 yards necessary to pass Moulds in that department.

It also helps that Diggs has saved his best performances for the Bills’ most crucial contests. When NBC’s football cameras descended upon Orchard Park for the first time since 2007, Diggs earned 130 yards on 10 receptions, one of which went for a score in the Bills’ 26-15 win over the Pittsburgh Steelers. Six days prior, he had 10 other receptions in a visit to Glendale, Arizona to battle the displaced San Francisco 49ers on ESPN’sÂ Monday Night Football.Â

But after the former performance, Diggs said perhaps the scariest thing an NFL defender could hear going into the postseason.

“I could be a lot better so I don’t think too much of it. I’m just trying to chase these wins,” Diggs said after his latest showing against the Steelers, per Cameron Hogwood of Sky Sports. He was keener to give credit to his offensive comrades, namely quarterback Josh Allen and offensive coordinator Brian Daboll.

“I give a lot of credit to the people around me, especially Josh Allen. Young quarterback, he put his faith and his trust in me to make plays with the ball in my hands and catching the ball. And coach Daboll, he calls the right stuff, he draws it up upstairs and puts me in the best position to make plays. Then my wide receivers coach Chad Hall, we put in a lot of work in practice. We rep a lot of stuff that is more game-like than anything.”

With Diggs in tow, the franchise quarterback Allen has taken several steps forward in his development, and Buffalo (10-3) has gone from mere playoff contender to potential division champion, one that would be a quarter-century in the making. The NFL has taken notice, as each of the Bills’ four December games will be broadcast on national airwaves. That division title can arrive when the Bills travel to Denver for the league’s traditional late-season Saturday showcase (4:30 p.m. ET, NFL Network).

A talented roster has been assembled in Orchard Park, one that many see in the postseason on a consistent basis moving forward. But many Buffalo representatives have yet to taste how sweet the playoffs can be, much of their experienced limited to cameos on the road in the wild-card rounds of 2018 (Jacksonville) and 2020 (Houston).

Who better to bring in than the star of one of the most renowned highlights in recent January memory?

Diggs’ time as a Minnesota Viking came to an end after five seasons in March, but his time in purple was immortalized through the “Minneapolis Miracle”, the jaw-dropping 61-yard touchdown in the final seconds of the 2018 NFC divisional playoff tilt against New Orleans. Some place the video on the same playlist as the Immaculate Reception or The Catch.

With Diggs disgruntled in purple, the Bills reached out and sent over four draft picks to obtain him. One of those choices has since become Justin Jefferson, the 22nd overall pick in April’s selection meeting who is well on his way to Rookie of the Year honors.

But in a year filled with uncertainty and a team on the cusp of true contention, Bills general manager Brandon Beane wanted a surefire veteran to work with when it came to molding the offense into a fearsome unit. He knew he had that player in Diggs.

“Yes, the draft is stacked with receivers,” Beane said during the offseason, per Chris Brown of BuffaloBills.com. “But I think it became evident with what’s going on around us now, that we don’t know what kind of offseason we’ll have. I just felt like it was going to be really hard, unless I traded up really high to find a guy that I know could walk in, day one, August 1st, and be ready to roll.”

“Obviously, time will tell if this move for Stefon was right. Sometimes the best-laid plans don’t always translate, but we’re confident and that’s why we swung with a first-round pick. You know I love draft picks and that was not easy for me to part with a first-round pick, but at the same time I view (Stefon) as our first-round pick and I thought it was good for the value of getting a guy like Stefon.”

So far, the translation is crystal clear.