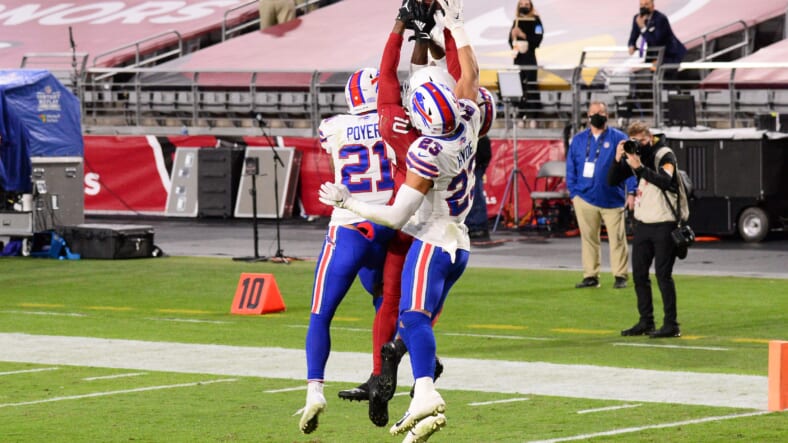 The Buffalo Bills are once again affected by the NFL’s continuing efforts to schedule games in the wake of the ongoing health crisis.

The Buffalo Bills are returning to the scene of the crime…robbery, to precise.

Buffalo’s Week 13 contest will take them back to Arizona’s State Farm Stadium in Glendale, as restrictions caused by the ongoing health crisis have forced several adjustments to the NFL schedule. The regular home of the Arizona Cardinals will now serve as a temporary base for the San Francisco 49ers, the Bills’ upcoming opponent on Monday. This interconference matchup will keep its Monday spot, with kickoff still scheduled for 8:15 p.m. ET on ESPN and ABC.

San Francisco’s movement from Levi’s Stadium in Santa Clara was forced by Santa Clara County’s shutdown of contact sports over the next three weeks. Such restrictions have also affected the football and basketball programs. The 49ers will take on Buffalo next Monday before welcoming in the Washington Football Team six days later.

For Buffalo, this means a return to Glendale, the site of the more heartbreaking losses in recent franchise history. The Bills nearly stole a win from the hosting Cardinals on November 15 but were done in by Kyler’s Murray’s 43-yard miracle toss to DeAndre Hopkins that gave the home team a 32-30 victory.

The Bills (8-3) are no strangers to scheduling changes enforced by COVID-19. Their Week 5 matchup against the Tennessee Titans was moved from Sunday to Tuesday after an outbreak in the latter organization. It was the first NFL game played on a Tuesday since December 2010, when the threat of inclement winter weather forced a game between Philadelphia and Minnesota to be moved. Buffalo’s next game, originally scheduled for the ensuing Thursday night in Orchard Park against Kansas City, was likewise adjusted, moved to the following Monday night. The Bills lost both games.

This will mark Buffalo’s first appearance on Monday night since October 2018, when they hosted New England.

Further adjustments to the NFL schedule involved moving games away from certain days. The long-delayed matchup between the Pittsburgh Steelers and Baltimore Ravens was moved for a third time, as the game originally scheduled for Thanksgiving night was first pushed to Sunday afternoon and later this Tuesday night. But a new shift, announced on Monday, will stage the NFL’s first Wednesday game since 2012 (3:40 p.m. ET, NBC), when the Democratic National Convention forced the season opener between the New York Giants and Dallas Cowboys to be played a day before its traditional Thursday spot.

As a result of those delays, both Pittsburgh and Baltimore’s Week 13 games have already been moved. The Steelers will now play Washington next Monday at 5 p.m. ET, while the Ravens will play a day later (8:05 p.m. ET, Fox/NFL Network) in what was originally a Thursday night tilt against the Dallas Cowboys.