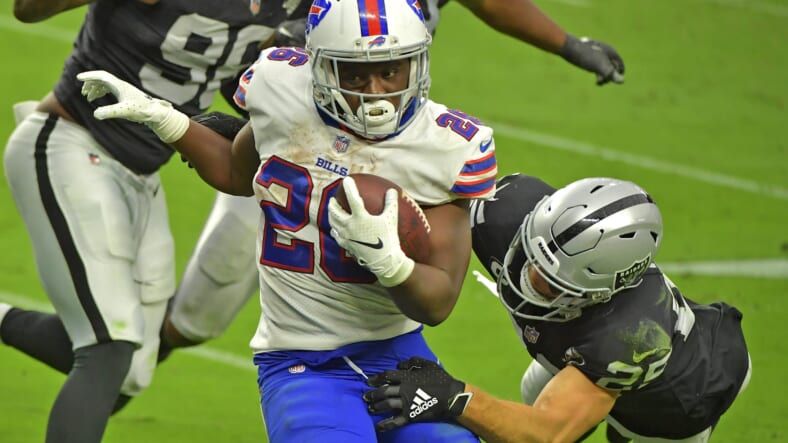 The Buffalo Bills are off to their best start in literal decades, but they know that there’s room to improve as they hit their bye.

For fans of a team that hasn’t won a playoff game a Bad BoysÂ movie came out…the ORIGINALÂ Bad BoysÂ movie…you’d think Buffalo Bills fans would be perfectly content with a 7-3 mark in a season whose mere existence is seen as a miracle by some.

Still, concern reigns in Western New York football circles as the Bills hit their late bye week. By now, even those who haven’t touched a football in their lives have seen how the Bills’ most recent endeavor ended in the form of a collaborative miracle between Kyler Murray and DeAndre Hopkins. While the rest of the world marvels at the sight, the victimized Bills have to live with it for two weeks, powerless to stop the endless stream of replays that will inevitably come with the Arizona Cardinals set to play on national television on Thursday.

“It sucks going into the bye week because it’s going to be the only thing on our mind for a week and a half, two weeks,” quarterback Josh Allen remarked to Adam Unger of WKBW. “But at the same time, it’s fuel on the fire.”

From one perspective, heartbreaking losses are almost refreshing in Buffalo, which suffered through a playoff drought that would be allowed to see an R-rated movie without a parent or guardian, but they’re starting to pile up. Sure, the resurgent Bills are in a healthy spot when it comes to the slow-forming playoff picture, but the quest toward ending another drought, that in earning an AFC East title, is no longer assured thanks to the rise of the red-hot Miami Dolphins.

To their credit, the Bills have moved on in a mature fashion, knowing that nothing can be done about the Cardinals game and that there’s no better time than the present. That maturity also stems from knowing that the game was far from being decided by a single play. Buffalo held a 23-9 lead in the second half before allowing Murray to run wild.

“They made the play, the special play they had to make to win the game and beat us,” head coach McDermott said, per Jeff Kerr of CBS Sports. “But that game should not have come down to that play and, unfortunately, it did. So, we take our lumps, we live by it and we learn from it and it’s got to drive you harder, man. It’s got to drive us all harder to want it more. We felt like we came here, we made enough plays to win the football game, just didn’t make one more. It’s unfortunate.”

“I think we do have some good momentum, but we can also use this game as great teaching tape,” defensive end Jerry Hughes added in Unger’s report. “You gotta finish teams off in this league. Whenever you have a team on the ropes, you gotta finish.”

The bye week has given the Bills a chance to regroup as they gear up for what many believe could be a Super Bowl run. There’s certainly time to revel in the good accomplished during this stretch…after all, 7-3 is their best 10 game start since 1996…but the Bills know they’re reaching a point where a mere playoff trip isn’t a milestone of success. With that power, however, comes major responsibility.

Buffalo’s defense certainly took their share of criticism in defeat, especially with the aforementioned highlight still making its rounds. All things considered, one could certainly call Sunday’s output respectable after Josh Norman missed the game with a positive COVID-19 test and fellow starting cornerback Levi Wallace was also rendered absent due to contact. Seventh-round rookie To hold Murray in check as long as they did was almost a miracle, but they still let up 453 yards in defeat, the third time in the five that they’ve let up at least 400 yards. Buffalo has done a better job in forcing punts and turnovers (earning two on Sunday in Glendale), but defensive coordinator Leslie Frazier has vowed to do some soul-searching during the bye.

“That game was such a unique game and even the game plan going in where we were very concerned about giving up plays over the top of the defense and yielded a little bit in the run game,” Frazier said, per Marcel Louis-Jacques. “We’ve taken a different approach going forward, but it was a unique game in itself and we learned some things from that game. We just tried to become more who we are.”

Offensively, the Bills will look into reforming their struggling rushing attack. After ranking eighth in the league in rushing last season, the Bills have plummeted to 29th in ground yards per game. That number plummets to 31st, ahead of only Chicago, if one removes a 190-yard outlier in their win over New England two weeks ago.

Rookie Zach Moss has been a reliable red zone option to the tune of three scores thus far and Devin Singletary has struggled to create sustainable momentum. Allen has taken on a majority of the rushing burden as a result, contributing to a problem McDermott called “a legitimate concern” according to Heather Prusak of WIVB.

Offensive coordinator Brian Daboll has absolved his rushers of the blame, and is likewise seeking to do what he can in this process.

“We need to do a better job, it starts with me and we gotta do a good job of designing things for those guys that they can go out there and execute at a high level. And then we need to make sure weâ€™re getting hat for hats at the line of scrimmage and making the proper reads and blocking the guys on the perimeter.â€ Bills offensive coordinator Brian Daboll explained in Prusak’s piece. “It takes all of us to get that job done. Weâ€™re not where we need to be in regards to the running game, we acknowledge that and we look forward to working on it particularly in this bye week and getting ready for the Chargers here in a couple of weeks.â€

It’s a win in itself that the Bills sit at 7-3 and still see room for improvement. Alas, it’s not the kind of win that can count as paint in the slowly developing NFL playoff picture.