Buffalo Bills ready for challenges of division title, trap game in the Rockies 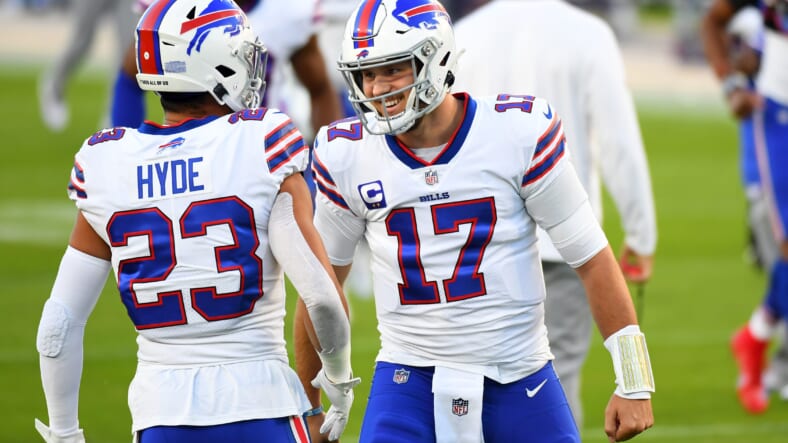 Thrust into another national spotlight, the Buffalo Bills have a lot to think about as a Saturday thriller looms.

Cold weather, a special Saturday timeslot, and a chance to win a division championship 25 years in the making…if you were trying to make a trap for the Buffalo Bills and their fans, you’ll find no better seduction than what’s waiting for them in Denver this weekend.

This weekend could be one long remembered in Western New York. Collegiately, the University of Buffalo Bulls are seeking their second conference and an (abbreviated) undefeated season when they take on Ball State in Friday night’s Mid-American Conference title game in Detroit (7:30 p.m. ET, ESPN). Less than 24 hours later, the professional Bills will battle the Broncos out west (4:30 p.m. ET, NFL Network). All the Bills (10-3) need to capture the elusive AFC East crown is a win over a Denver squad (5-8) in need of multiple miracles to even think about the playoffs.

The next step of the Bills’ 2020 season comes less than a week after they earned what may be their biggest win of the 21st century. In the first visit of NBC’sÂ Sunday Night Football banner to Orchard Park since 2007, Buffalo topped one of the few teams ahead of them in the AFC playoff chase. Their 26-15 win over the Pittsburgh Steelers has placed the team firmly in the national spotlight. Colin Cowherd, for example, declared that the Bills were the best team in the NFL on his weekday show on FS1, even surpassing the defending champion Kansas City Chiefs (who previously defeated Buffalo in Orchard Park).

Colin Cowherd now has the #Bills ranked as the best team in the NFL. pic.twitter.com/Gm8xLtFY3s

Needless to say, dealing with new expectations has been something of a challenge as the Bills go through their prep for the Broncos.

“The only thing we’ve earned at this point is all that noise and we’ve got to block that out, honestly,” Bills head coach Sean McDermott said after the Pittsburgh victory, per Jourdon LaBarber of BuffaloBills.com. “We’re dealing with young men and young women, who, you know, some of them are new to this. You’re talking about the best of the best, so every week you’ve got to go back and reset, start all over again. But that’s where the process comes in. You’ve got to love that…You’ve got to love the preparation. You’ve got to love putting in the time and the work to get yourself to where we were with the outcome last night. That’s why it makes it so special when you can win those games because you know the hard work that went into it.”

McDermott’s players have apparently heeded his warning of complacency after such a big win. Shortly after the final seconds ticked away against Pittsburgh, players brandished a flag that bore the message “THE JOB’S NOT FINISHED”. Buffalo nearly had all the help necessary to complete one part of the job, clinching the team’s third playoff berth in four years after a 17-season drought, last weekend. They took care of their business against Pittsburgh and several other contenders dropped their own matchups, but the Baltimore Ravens didn’t feel like cooperating. Their 47-42 win in Cleveland in a Monday night thriller was the one requirement that went unfulfilled.

But Buffalo has been patient, and now the divisional clinch is far more straightforward: win.

Clinching a division title would not only bring some long-awaited good vibes to the Bills’ facility and hope and joy to an area/state in desperate need of it this holiday season, but it would also accomplish one of Buffalo’s most notable goals: it would allow Orchard Park to host a playoff game. Bills Stadium has not staged a postseason contest since 1996, a wild-card round loss to Jacksonville.

“Guys understand whatâ€™s at stake and want to be a part of something special,” defender Jordan Poyer said in a report from WIVB. “Itâ€™s not gonna be easy, theyâ€™re not just gonna come in and hand us over a win so weâ€™ve gotta continue to prepare and continue to get ready to play our best football on Saturday.â€

Standing in their way are the Broncos, as the Bills make their second visit to Mile High in as many years. Denver is anything but mathematically eliminated, but their record doesn’t indicate how much of a pest they’ve been against contending teams this season. The Bills, in fact, may be appreciative for one of their more recent efforts, dealing the Miami Dolphins a 20-13 loss last month, partially allowing Buffalo an opportunity to clinch before Christmas. Denver also took the aforementioned Chiefs to the brink in a 22-16 defeat on the road earlier in December and topped the Carolina Panthers in Charlotte last weekend. Franchise quarterback Drew Lock provided some good hope for the future with a career-best four touchdown passes.

Despite their recent success, silencing those who have asked “but who have they beaten?” with their win over the Steelers, the Bills know they’re in no position to take the Broncos lightly.

“I don’t really care what the record is. It’s the same thing each and every week, we don’t care what the record is, we know this is a good football team,” cornerback Micah Hyde said in a report from team writer Dante Lasting. “They got weapons outside, obviously, with the two rookie receivers (Jerry Jeudy and K.J. Hamler) and (Noah Fant). He’s an Iowa guy, and those Iowa guys are studs. They’ve got a running game with two really good running backs, so they’re just another talented offense and it starts with (Lock). He’s able to make any throw on the field (but) we understand if we get pressure in his face and get pressure on him, at times he turns the ball over.”

To Hyde’s point, the sophomore Lock has thrown 13 interceptions this season. Only Carson Wentz of Philadelphia has thrown more (15).

As Buffalo sets their sights on becoming the first team other than the New England Patriots to win the AFC East since 2008, quarterback Josh Allen believes that they can take a lesson from the Foxboro monopoly: that of taking care of business. New England often built their dynasty through handling their affairs in games they were expected to win. Those situations would often come against overmatched divisional competition.

“This divisionâ€™s been dominated by a team in Foxborough for a long time, and theyâ€™ve had a lot of sustained success, and thatâ€™s kind of the mold. Thatâ€™s what people want to be and how they do it and how theyâ€™ve done it is what people want to do,” Allen said per WIVB. “We understand whatâ€™s a stake every time we step on the field from here on out and we know we have a chance but our goal is to play Saturday and put our best forward and try to win a game.”

While the Bills are aiming for heights they haven’t reached in over a decade, Allen wants both his team and the football-loving public know that they have no intentions of stopping at a mere division title, even if they wrap up the four-team affair by the end of Saturday’s visit to the Rockies.

“Itâ€™s not just an end-all, be-all we won the AFC East letâ€™s celebrate. That was our goal, thatâ€™s been our goal and thatâ€™s the easiest way to get to the playoffs by winning your division. Itâ€™s no small task, we set our goal to have a home playoff game and that just secures that one right to do so. Itâ€™s not the end all be all, itâ€™s a step in the right direction and we gotta continue to keep working hard.”

Should they fall to Denver, Buffalo can also clinch the division if the Dolphins fall to the Patriots on Sunday.