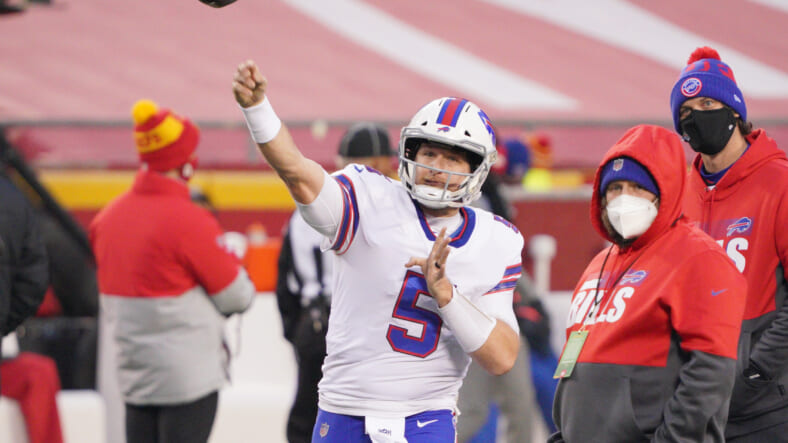 The Buffalo Bills finally have an answer in their franchise quarterback role, but adjustments may be coming to their backup situation.

It took 24 years, 18 AFC East titles for the New England Patriots, and countless false prophets…but the Buffalo Bills have finally found the answer to Jim Kelly.

Any doubts about Josh Allen’s NFL future were more or less eliminated with a historic season that likely occupies its own chapter in the Buffalo record books. Allen’s 2020 evolution turned the Bills into bona fide championship contenders, ones that fell just a game short of the Super Bowl. It’s safe to say that the Bills envision Allen riding out the decade with a streaking buffalo on his helmet…and maybe partake in a little of the next one as well. In fact, it may not be too early to start thinking about an extension to ensure he stays in blue and red.

But if any franchise knows that NFL prosperity can be yanked away in the blink of an eye…it’s the Buffalo Bills.

No one in their right football mind is going to deny that Allen has a role to play in the future of not only Western New York but the national gridiron scene as a whole. But the Bills must think about the names behind Allen, just in case the medically unthinkable happens. Allen has started the last 42 Bills games under center, but he did miss four games during his rookie year (2018) with an elbow injury. During that time, Buffalo worked with the backup hydra of Nathan Peterman, Derek Anderson, and Matt Barkley, the latter securing the long-term backup job by earning the lone win in that bunch.

Obviously, Allen is the toast of The Queen City until further notice. But no one in the NFL has ever prepared for an injury, especially one of the season-ending variety that can sink Super Bowl runs entirely. Barkley has proven somewhat reliable when called upon (his 2020-21 ledger consisted of Week 17 mop-up duty in a blowout win over Miami), but the Bills might have plans for rookie Jake Fromm to assume the role. Chosen in the fifth round of last year’s draft, Fromm’s rookie season was an unusual situation where he was kept in relative isolation in case COVID-19-related protocols rendered Allen, Barkley, and practice squad arm Davis Webb inactive.

It may seem irrelevant in the grand scheme of things, but backup quarterback remains one of the most underrated positions in any of the four major sports. The wrong name behind Allen, likely one the Bills hope they never have to see in the weekly box score, could save or derail a championship effort the Bills have steadily built.

Barkley’s football career has never truly recovered since he fell to the fourth round of the 2013 draft and a six-game stint as a starter yielded little in Chicago. But he managed to create some stability in Buffalo after guiding the Bills to a one-sided win over the Jets during the aforementioned 2018 season, having been Allen’s backup ever since. Barkley’s given little reason for the Bills to move on, but it’s possible they could move on to a younger name like Fromm to serve as Allen’s understudy.

Very, very, very unlikely. The Bills just used a draft pick on a quarterback in Fromm, and if they bring in another camp arm. It’ll likely be one of the veteran free agent variety. Longshot options on day three include Ian Book of Notre Dame and Dustin Crum out of Kent State.

One of the most reliable pre-Allen options as Buffalo quarterback was Taylor, who helped the Bills end a playoff drought that nearly became old enough to enjoy a Labatt Blue legally. Since Allen’s takeover, Taylor has been the opening act for rookie sensations in Cleveland and Los Angeles. If Allen were to go down, Taylor would serve as a reliable replacement because he has likewise been a multi-threat; some of the records Allen broke this season, namely the quarterback rushing marks, previously belonged to Taylor.

It’s unfortunate that Brissett likely won’t get an opportunity to win his starting job back in Indianapolis, as he performed admirably when Andrew Luck abruptly retired in 2018. Brissett is another mobile threat who would help Buffalo quickly pick up the pieces if the unthinkable happened to Allen. Despite backing up Phillip Rivers this season, the Colts had Brissett come for quarterback sneak situations on crucial short-yardage situations (scoring three touchdowns last season).

Colt McCoy to Alfred Morris for a Giants TD!!! pic.twitter.com/FnM6SBabAB

If Barkley leaves and the Bills go looking for a more traditional veteran option to compete with Fromm, they could go with McCoy, who was relatively decent in two starts with the Giants, even helping the team earn a win in Seattle.

Quarterback remains very low on the Bills’ offseason priority list. If they lose Barkley, it’s likely they’ll attempt to groom Fromm into the backup role, though a competition will ensue if they want someone with more experience behind Allen.