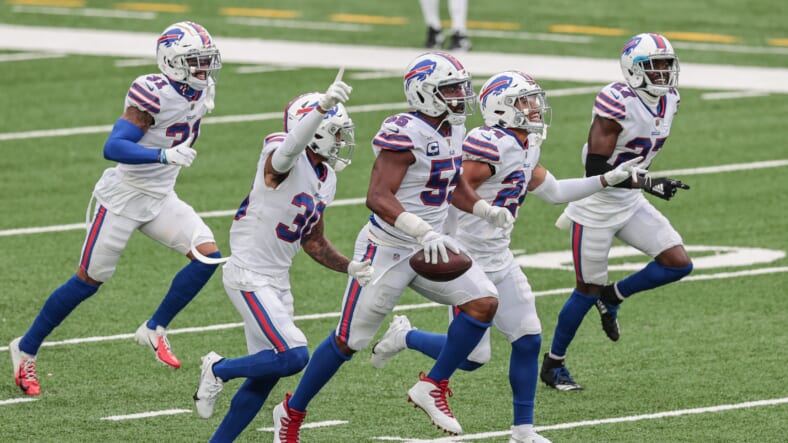 Arguing over who is most deserving of the Bills’ long-awaited division title is extraordinarily moot. The team has captured its success through a strong sense of unity and would likely scoff at such a debate. But it’s safe to say that this one might mean a little something more to Jerry Hughes and Lee Smith.

No one on the current Bills roster has played more games with a charging pair of buffalo on their helmet than Hughes and Smith, respectively serving as a defensive lineman and reserve tight end. Hughes has partaken in 103 games since coming over in a 2013 trade with Indianapolis while Smith has shown up in 80 contests over two Buffalo stints. In comparison, guard Dion Dawkins and long snapper Reid Ferguson, both 2017 arrivals, are next on the list with 62.

As the longest-tenured Bills on the roster, Hughes and Smith are the only players in Western New York to play on-field witnesses to the dryest spell in Buffalo football history: a 17-year playoff drought that becomes a distant memory with each passing week. This historic season has seen the end of many dubious steaks, including an AFC East division title drought that has stopped at a quarter-century. A good part of Hughes and Smith’s respective tenures, however, have been consumed by building those streaks, even if they personally had little to no role in the gridiron malarkey.

Hughes, for example, has been one of the more reliable veteran pass rushers in football since debuting as a first-round pick of the Colts in 2010. Since the 2012 season, only nine weeks of regular season NFL football have been played without Hughes taking the field…and that’s only because his team had a bye week. In that span, Hughes ranks in the top 25 in sacks (55), quarterback hits (120), and tackles for a loss (80). Hughes has seen his share of individual accolades as well, appearing on NFL Network’s Top 100 Players list in 2015 (No. 63).

But the lack of team success always irritated Hughes. While he partook in a pair of playoff games during his three years with the Colts, he was subjected to several frustrating seasons of football purgatory in Orchard Park. Those campaigns were often defined by wasting fast starts, such as their 5-3 opening in 2014 that led to a 9-7 campaign.

As serviceable comrades dwindled in the defensive locker room, Hughes took on the mantle of locker room leader. Defensive coordinator Leslie Frazier saw that brand of leadership during Buffalo’s October win over the New York Jets. Facing a strong challenge from a desperate opponent in East Rutherford, Frazier remarked that the only thing more impressive than Hughes’ play on the field was his composure off of it. The assistant coach mentioned that Hughes’ tenacious brand of defense encouraged him to raise the pressure on opponents following one-sided losses to fellow AFC contenders from Tennessee and Kansas City over the fall. It paid off in the form of an 18-10 win over the Jets, one that saw the Bills earn six sacks and allow only 191 yards.

“We didnâ€™t talk about things that needed to be done with the D-line, it was more Jerry taking it upon himself as a leader to pull those guys together,â€ Frazier said, per John Wawrow of the Associated Press. â€œJerry was so positive, and encouraging his teammates on the sideline. I remember saying to myself, `Man, thatâ€™s what you need out of one of your star players whoâ€™s a leader.â€˜â€

Hughes was the headliner in the aforementioned New York victory, picking up six tackles, two sacks, an interception, and a forced fumble. He was awarded the AFC’s Defensive Player of the Week Award for his efforts.

In the fateful win in the Rockies, Hughes put a dagger in the Broncos during the early stages of the third quarter. Immediately after Buffalo build a 28-13 lead, Hughes treated Bills fans to a showcase from the past, namely from his days as a running back at Stephen F. Austin High School in Sugar Land, Texas. The defender dodged five would-be tacklers from Denver to score a 21- yard touchdown, giving the Bills a 35-13 advantage. From there on out, a countdown began to commemorate the Bills’ first AFC East crown since 1996.

Eschewing expectations, Hughes’ postgame attitude mirrored his teammate’s jovial mood, but the division title has proven to be anything but gridiron nirvana for a man desperately seeking it.

“Man, it feels amazing,” Hughes said in a report from Jourdon LaBarber of BuffaloBills.com, clad in a celebratory t-shirt bearing the insignia “Won Not Done. “This is something that we talked about once I got to this organization. We spoke about bringing a division championship home to Buffalo. So, it feels great to be a part of this team, the way we did it, the way Sean and Brandon Beane were able to assemble the team together and put guys in the right spot so we can be success and the results are showing.”

“I know that we’ve still got a lot more to accomplish. That’s what I like about these guys. We can enjoy a milestone and still understand that the goal is still not reached. So, I’m excited. We’re going to enjoy this tonight and then we’re going to get ready for next week.”

Hughes did enjoy at least a taste of postseason glory last season, earning a career-best three sacks during Buffalo’s playoff cameo in Houston.

Smith may be one of the lesser-heralded members of the Bills’ roster, though his impact cannot be denied. The former fifth-round pick has built a sizable career since experiencing his first NFL release before taking his first snap, bid farewell by the New England Patriots at the end of his first training camp. He partook in parts of four seasons with the Bills before signing with the Raiders in 2015. Smith was asked to rejoin the Bills in 2019 and he was quick to accept, as the tight end was drawn to a Buffalo reunion by the good vibes he drew from the organization, particularly its new direction under current owners Kim and Terry Pegula.

“Mr. and Mrs. Pegula have spared no expense around here. It’s invigorating and makes the players feel not just respected but appreciated. This place is first class,” Smith said in a 2019 episode of team program One Bills Live. “I’m all about enjoying coming to work everyday. If you’re fortunate enough to be able to make a decision of where you want to go then my thing has always been that being around good men that I want to work for.”

Smith’s modern work has mostly come through special teams participation. He did earn a one-yard score in Buffalo’s September win over the Los Angeles Rams and seemed poised to add to that tally on Saturday, but his fourth-quarter catch from Josh Allen was called back due to a penalty.

Buffalo (11-3) is still in contention for one of the top seeds in the AFC’s playoff bracket. Their next contest comes on the road against the New England Patriots next Monday night (8:15 p.m. ET, ESPN/ABC).