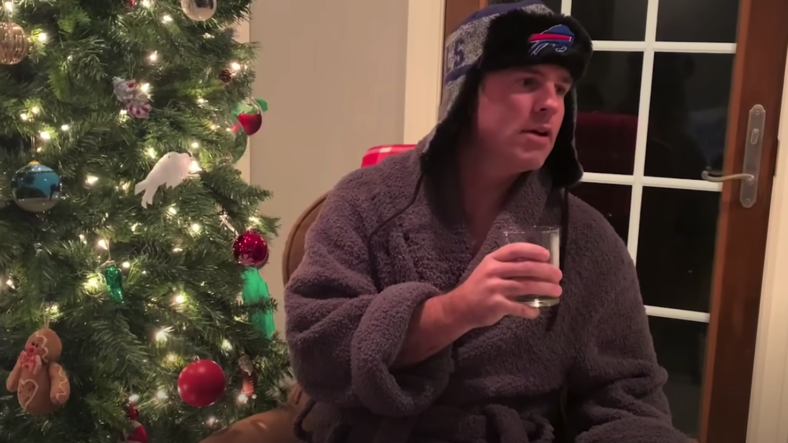 With apologies to Lexus, the Buffalo Bills have been the true providers of a “December to Remember” in 2020.

With the Christmas season in full swing, the Bills are enjoying one of the most successful and publicized campaigns in team history. Buffalo (11-3) has won four in a row, including each of their three December contests. That trio has each been televised to a national audience, and that trend will continue on Monday when the Bills battle the New England Patriots (8:15 p.m. ET, ABC/ESPN). They can clinch the second overall seed in the AFC playoff bracket with a win over the Patriots and a Pittsburgh loss to Indianapolis on Sunday.

In the midst of their preparation, the Bills did take some time to acknowledge the holiday as they prepare to head to Foxboro. For example, it began to look at lot like Christmas at the team facility this week, appropriately on December 24. Quarterback Josh Allen bore a green sweatshirt under his practice jersey, bearing the insignia “Felic Navidad” and an animated image of namesake and starting offensive lineman Jon Feliciano dressed as Santa Claus. Receiver Stefon Diggs likewise appeared to be clad in such a hoodie. A certain Buffalo defender gave a whole new meaning to “White Christmas”, as cornerback Tre’Davious White wore gold cleats adorned with wreaths, holly, and lights.

The Bills also made time for gift-giving during the week. Fortunately for the fans, these Christmas surprises came not through Sunday turnovers, as they kept the exchange to off-the-field…heck, maybe even off-the-road…endeavors.

Buffalo receivers had a special surprise for receivers coach Chad Hall, coming together to purchase the former Air Force second lieutenant with a new Ford F-150 pickup truck. Hall’s emotional reaction was captured in a video since deleted from Isaiah McKenzie’s Instagram page but preserved by The Bills Wire’s Bradley Gelber.

How awesome is this? The #Bills WRs got together and bought WR Coach Chad Hall a truck from Christmas. pic.twitter.com/53sXt1SHRC

As a team, the Bills commemorated the holiday by having their players sing the seasonal carol “The Twelve Days of Christmas”. The video’s introduction features general manager Brandon Beane channeling Randy Quaid’s character fromÂ National Lampoon’s Christmas Vacation, clad in a bathrobe and Bills winter hat. Beane also jokingly laments that he and the front office were unable to find better singers for the holiday season.

Buffalo will conclude their regular season in Orchard Park next weekend against Miami.