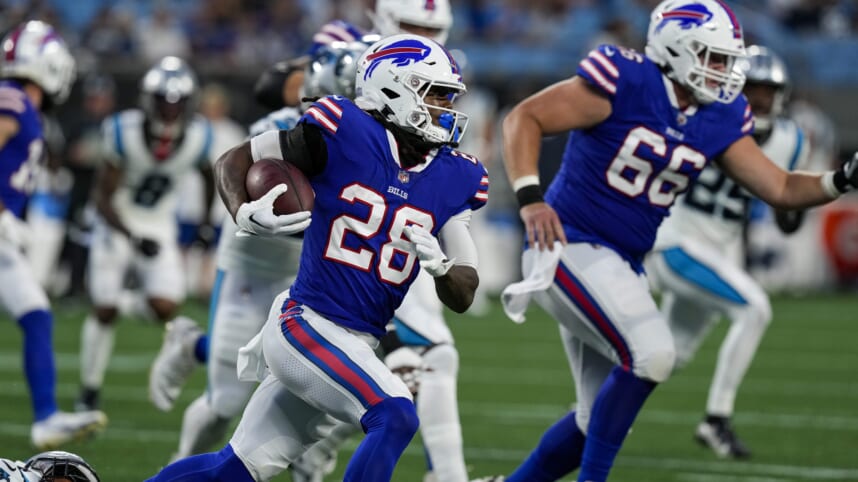 Over the last three seasons, the Buffalo Bills have risen into one of the premier, powerhouse teams in the NFL.

Possessing one dangerous offense that nearly overthrew the Kansas City Chiefs in a thrilling overtime showdown in the divisional round of the playoffs last season, the Bills focused on improving their defense over the Spring in anticipation for another deep run. Following the acquisition of free agent edge rusher Von Miller, the Bills selected cornerback Kaiir Elam out of Florida 23rd overall with their first-round pick.

But with their next pick in the second round, the Bills decided to draft Georgia running back James Cook, the younger brother of Dalvin Cook from the Minnesota Vikings. For the last four years, the Bills have struggled to find a consistently dominant starting running back that can alleviate the pressure off quarterback Josh Allen’s shoulders.

Although Devin Singletary did have a promising breakout performance last season (188 carries for 870 yards and 7 rushing touchdowns), his inconsistencies over his three-year tenure have been concerning, and Zack Moss hasn’t proven to be the solution since joining the team in 2020.

Fast forward to April of this year, Cook winds up being drafted by the Bills come the second round, and the rest is history. The opportunity was too good to resist, particularly with the hope that, just maybe, the Bills found their next, game-changing running back who can deliver the success they’ve been in need for.

That said, considering Cook has three other running backs he has to compete against, it begs us the question, does he have a legitimate chance at taking over the reins as the main workhorse in his rookie season?

Though it might not be right away, the answer is yes, and for two key reasons.

When you think of Cook, the three core skills that come to mind are his speed, agility, and vision. Just like his older brother, Cook brings very sharp quickness and great acceleration, allowing him to fly downfield with incredible pace.

Over the draft combine, Cook ran a 40-yard dash time of 4.42, which wasn’t anything special in comparison to his other running back classmates. That said, his ability to dart in so many different directions and kick his speed into high gear in open space makes him quite the threat.

In addition, Cook’s agility is unreal and could be his best skill. Because his balance and nimble touch is so precise, Cook can make very stark path alterations with slicing jump cuts, which he can continue up to the second level. As a result, Cook can be challenging to take down and uses his great feel for changing direction to breakaway for large gains.

But what makes him such a dangerous take-it-to-the-house type of running back is his impressive vision. Cook is not only explosive, but he’s also quite patient behind his lead blocks, granting him time to make smooth reads as he maneuvers his way through traffic.

Upon reviewing Cook’s collegiate production over his four years at Georgia, it’s easy to notice that his numbers weren’t anything flashy up until his senior year. In his final season, Cook had himself 728 rushing yards with 7 touchdowns on 113 attempts over the 15 games he played. To add to his strong showing on the ground, Cook also reeled in 27 receptions for 284 yards and four receiving touchdowns, posting over 1,000 yards from scrimmage.

Despite the promise he displayed as a senior, Cook’s output wasn’t as high as it could have been, even for collegiate numbers. However, Cook wasn’t to blame for that. In fact, if you look at the workload Cook received throughout all four years, he only had 230 carries, which is a standard amount a running back can post in a single season if granted the opportunity. Had Cook received more reps per season, we could be looking at much higher numbers from the bright Georgia alum.

With that said, the most important stat that reflects Cook’s talent is the following: In 230 carries in college, Cook averaged 6.5 yards per attempt. His ability to maximize each chance he gets, be it as a runner or receiver, is flat-out incredible and shouldn’t be ignored heading into the 2022-23 season.

However, what favors Cook, despite being the number one backup, is his gift for evading tackles and exploiting lanes he can fly through. It’s not that Singletary can’t do these things well. It’s just that Cook’s combination of being so shifty, along with his zooming speed, makes him a more dangerous back to go up against. We’ve already seen what he can do with limited carries and receiving opportunities. And if he starts to hit those high yard-per-carry thresholds, it’s just a matter of when he will start.

The second obstacle Cook has to hurdle is the scrutiny from analysts relating to not only his slender lower half and passive run finishing but also his lack of value close to the end zone. Though these are areas one should keep tabs on, it’s not worth being concerned about, at least not in the long hall, and here’s why.

Standing at 5’11” and weighing in at 190 pounds, Cook is not only taller than his brother by an inch but is also just about 20 pounds lighter as a rookie. With a full year of training, conditioning, and working out (particularly over the following offseason), there’s no reason why he can’t be as lethal as his brother when pounding in goal-line scores.

Lastly, Cook brings great versatility as a pass catcher. You can send him on a wheel route or have him post up in the flat, and he’ll secure the catch you need and find ways to move the chains.

With the high-scoring offense the Bills have, the opportunity for Cook to become the starting running back feels inevitable. And it wouldn’t come as a surprise if Cook is granted that role later this season.