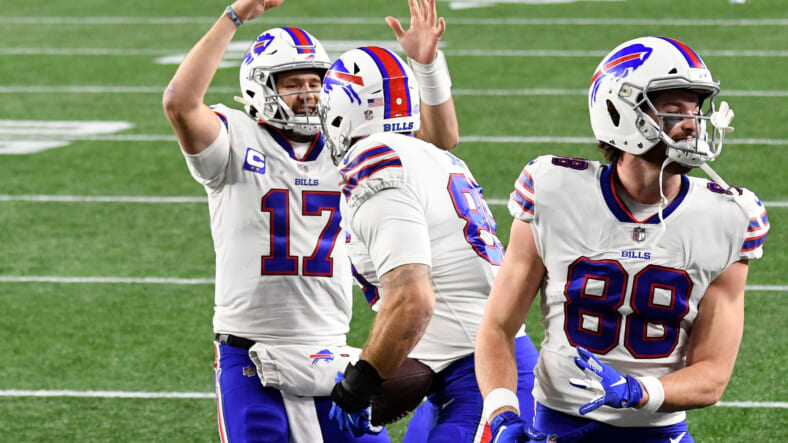 The Buffalo Bills and Kansas City Chiefs are armed with MVP QBs, but their AFC title trips were earned through team efforts.

Save for the argument over what constitutes a catch, no modern professional football argument gets more heated than that of Most Valuable Player.

In a perfect world, MVP would be awarded to the player who best personifies its middle initial. But the honor becomes a popularity contest, often awarded to the best-trending player on a winning team. The Super Bowl MVP Award named after Pete Rozelle is particularly guilty of this, evidenced by the accolades sent to, say, Ray Lewis in Super Bowl XXXV (four tackles, five pass breakups in a 34-7 win over the Giants). Other times, the award goes to the player with the best highlights or statistics. The NFL has thankfully steered clear of this, but there was something questionable when Alex Rodriguez took home MLB’s title after his Texas Rangers mustered 73 wins in 2003.

It’s a delicate question and one Josh Allen and Patrick Mahomes might have to deal with at the virtual NFL Honors on February 6, a day before one of them partakes in Super Bowl LV. Each is expected to be up for the seasonal MVP award, but they’ll first do battle in the AFC Championship Game when Allen’s Buffalo Bills visit Mahomes’ Chiefs in Kansas City on Sunday evening (6:40 p.m. ET, CBS).

The NFL, frankly, couldn’t have asked for a better “final four” as an uncanny season nears its end. This could be the first of several showdowns between Allen and Mahomes with a Super Bowl trip on the line, while the other side of the bracket features one of the last opportunities for us to see Tom Brady and Aaron Rodgers go at is. Each thrower’s name will undoubtedly be brought up in the MVP conversation. If Mahomes takes home the title, it would be his second league MVP award after first earning for his efforts in the 2018 campaign.

But, frankly, if we are truly defining MVP…neither AFC competitor should take it home.

There’s no doubt that Allen and Mahomes have been integral to their respective sides’ success. The pair constantly battle for supremacy at the top of not only the NFL’s statistical ledgers but the SportsCenter Top 10 as well. There’s no way of knowing if we would have a Bills-Chiefs matchup on Sunday if you removedÂ onlyÂ Allen and Mahomes from the equation, but let’s just say both Buffalo and Kansas City are undoubtedly glad that they don’t have to figure it out.

But what makes the AFC title game matchup so intriguing is not only the Allen-Mahomes matchup…it’s the fact that the 2021 postseason tournament has left zero doubt that these are the two bestÂ teamsÂ in the conference. This is not a battle between the Allens and the Patricks; it’s a struggle between the Bills and Chiefs.Â Look no further than last week’s Divisional playoff action. When Allen and Mahomes were shown to be human…or at least the closest they’ll ever be to human, anyway…their teams rose to the occasion to have their backs.

The cruel winter of Orchard Park got to Allen last week, his trademark deep balls getting lost in the Western New York winds. All in all, Allen did manage to post respectable numbers (23-of-37, 206 yards, and a score), but they were still far from the figures Bills fans have grown accustomed to. Buffalo remains in such a precarious position, one where they could be regarded as Super Bowl contenders one week and also-rans the next by a football-loving public that refuses to look beyond a team’s most recent showing. But the Bills have shown how far they’ve come in Allen’s three seasons at the franchise quarterback helm. Over their first two seasons, the Bills were 6-13 in his first two seasons as a starter when he posted a passer rating under 90. That included a dismal showing in last season’s AFC Wild Card playoffs in Houston, a game in which he failed to lead the Bills into the end zone after scoring through trickery on their first possession.

To his credit, Allen has cut down on such games, turning himself into a bona fide star and franchise man. But Buffalo victories no longer flow solely through him.

The Bills’ Divisional victory over Baltimore earned a massive exclamation point through the efforts of Taron Johnson, one of several day three draft picks making a difference in the Orchard Park football revolution. Jerry Hughes, one of the longest-tenured Bills on the team, has earned multiple sacks in two of his last playoff contests, including two of the Ravens’ mobile throwers Lamar Jackson and Tyler Huntley last weekend. It was part of a stellar defensive effort reminiscent of the Bills’ 1992 AFC title game efforts, one where the offense struggled to the tune of a single field goal, but earned a 10-7 victory headlined by Carlton Bailey taking a John Elway interception back 11 yards for a majority of the Bills’ scoring. 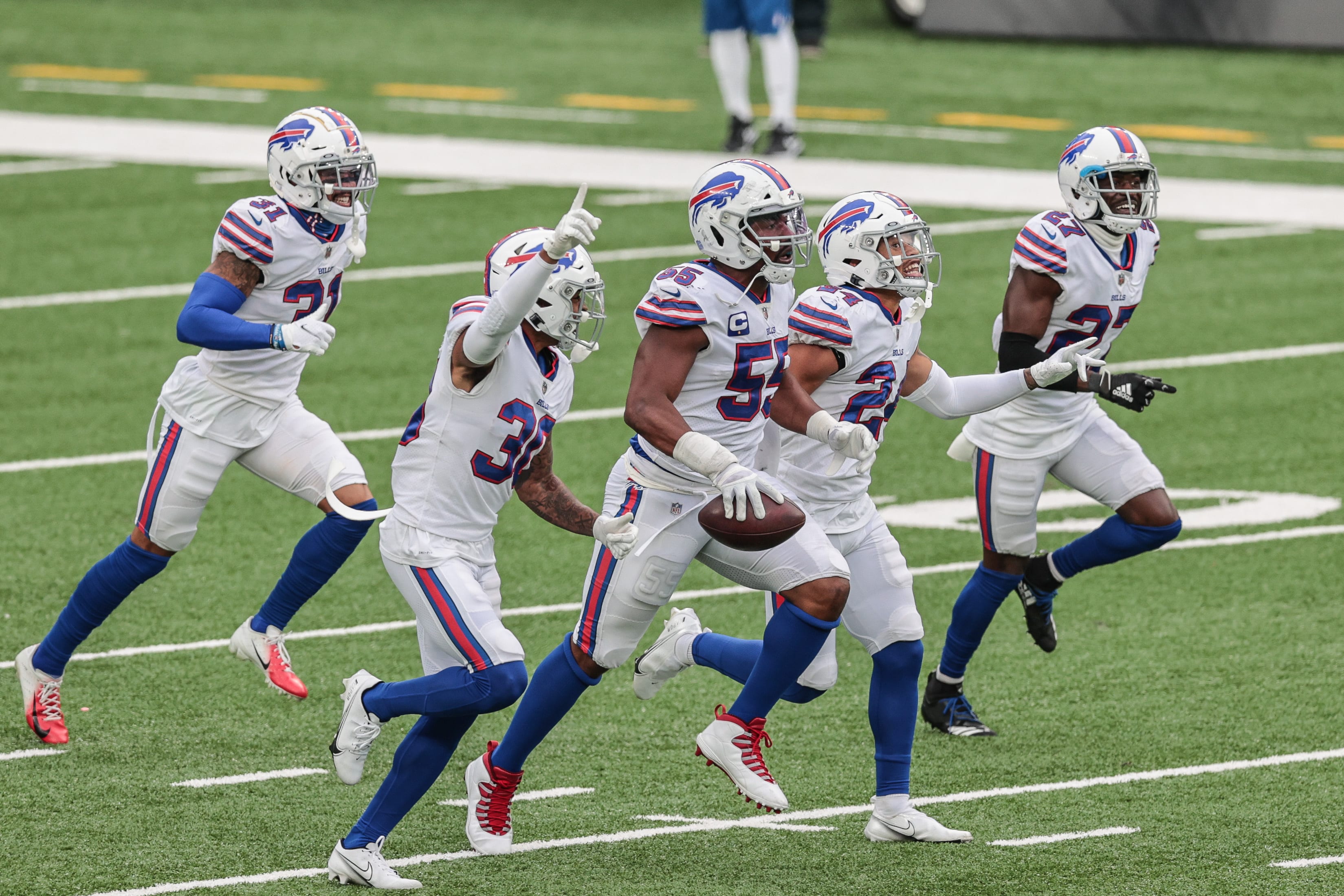 Allen’s protection has been assisted by the rise of Daryl Williams, who took over for an injured Cody Ford over the final quarter of the season. Williams also recovered a crucial Allen fumble in the Wild Card triumph over Indianapolis. Opposing defensive attention may center on names like Stefon Diggs and Cole Beasley, but the reserve receiving ranks include a 1,000-yard catcher in John Brown and a master of trickery in Isaiah McKenzie, not to mention rookie Gabriel Davis, who has become one of the most dangerous red zone targets in the league. In their tight end corps, Dawson Knox has joined Davis as a reliable target close to the goal line. Hughes’ partner in longevity, Lee Smith, has been one of the team’s most reliable blockers.

Shocked as the football world may be at the emergence of so many, Buffalo’s depth was of no surprise to head coach Sean McDermott or Diggs, one of the most impactful on-field contributors.

“You’ve got to be able to count on depth,” said head coach Sean McDermott, per team reporter Chris Brown. “You’ve got to have depth in this league, this year in particular, with not only injuries occurring but the virus, knocking people out. So, it’s highly critical.”

“I feel like we’ve got a lot of guys that can play well at the receiver position,” Diggs added in the same report. “A lot of guys can make plays, and not even just at the receiver position. Whether it’s (running back Devin Singletary) out wide or (Dawson) Knox out wide. It’s somebody that you’ve got to account for because guys can make plays on the outside. As far as lining up four wide, it isn’t just one of us out there. There’s a lot of us out there.”

On Sunday, the Bills face a team that has matched their team efforts, albeit having done so on a higher level thus far. Their six-year playoff streak is the longest active endeavor in football, one that began long before Mahomes’ arrival. There’s no denying that Mahomes, acquired through a pick the Bills sent to Kansas City, has brought the Chiefs to the next level, but the Chiefs have proven they’re equally dangerous if he’s unavailable for whatever reason.

When Mahome was forced to leave Kansas City’s Divisional tilt against Cleveland with a head injury, the insertion of Chad Henne could’ve led to certain doom for the Chiefs. Instead, not only did Henne wind up playing an integral role in the victory…in part thanks to head coach Andy Reid’s confidence in him, bringing the theme of a team effort full circle…but he was assisted by reserve rusher Darrel Williams, more than a year after Damien Williams took over Super Bowl LV while Mahomes struggled with the San Francisco defense. The defense also rose up to the occasion, holding Baker Mayfield and an upstart Browns offense to get no further than a 22-17 final.

“The thing I’m proudest about, is the guys persevering through and winning games. You kinda go back and look at the schedule you had and there’s some pretty good football teams that we the opportunity to play against. To be able to get yourself in a position to win each and every week, that’s pretty good, you’re headed in the right direction, at least,” Reid said of team unity on 610 Sports Radio (KCSP-AM) this week. “It’s tough enough to win one game in this league, let alone win 14 of them. I’m proud of them for that, maybe most of all, I’m proud that they’ve taken a humble approach to everything. They haven’t sat there beating their chest and said, “We’re the Super Bowl Champs and you can’t beat us. That’s not the way they’ve gone about it, they’ve not let up an inch on the process of getting ready to play each team.”

One team will emerge victorious on Sunday, advancing to Super Bowl LV. Not one player…but a team.