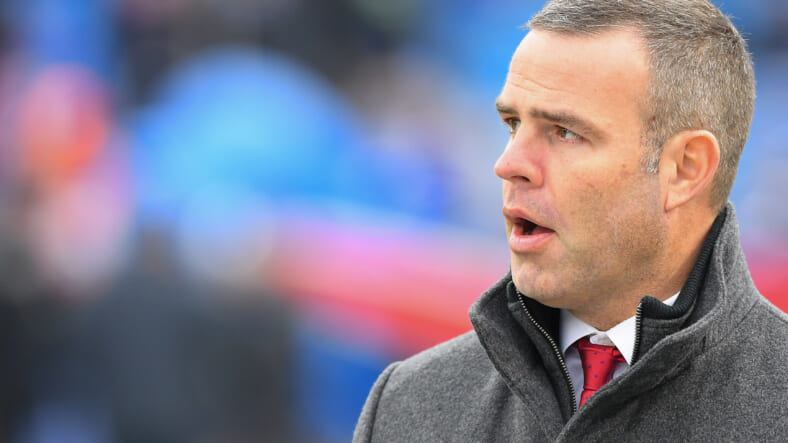 After ending the longest playoff drought in Buffalo Bills history, Beane has been locked up through a multi-year extension.

The Buffalo Bills announced on Friday that they have signed general manager Brandon Beane to a multi-year extension. Beane has been with the team since 2017.

“Brandon is an outstanding leader, and he has brought a great level of stability throughout our organization. One of the things we appreciate and respect about Brandon is that he is very thorough in his decision-making process,” Bills owners Kim and Terry Pegula said in a statement on the team website penned by Maddy Glab. “No decision he makes comes without a great deal of study and research. We appreciate his strong communication skills, and he works extremely well with us, with Sean, and with all levels of the organization. We are happy to extend his contract and to have Brandon and Sean leading our football team for many years to come.”

In his first season at the helm, Beane helped end the Bills’ franchise-long playoff drought at 17 seasons. The team has now been to the postseason in two of the past three years and is currently on pace to earn its first division title since 1995. Buffalo won 10 games for the first time since 1995 during the last campaign.

Head coach Sean McDermott offered his praises after news of Beane’s extension emerged. The two previously collaborated in Carolina, where Beane served in a variety of front office roles. McDermott served as the Panthers’ defensive coordinator for the final six years of Beane’s watch and was brought over when the latter came to Buffalo.

“I think for most GMs to have that experience on the business side of the football end of things, I really can’t envision myself working with anybody else but Brandon moving forward,” McDermott said in Glab’s statement. “For coaches, as I mentioned earlier, it’s one thing to be a good coach and develop players. But if you’re not being fed good players, it’s almost like drinking from a dry hose. That’s a hard thing to sustain over the course of time. So being fed good players, being fed players that match what we’re looking for, Brandon has done a phenomenal job. I can’t envision myself working with any other GM.”

Among Beane’s most notable Buffalo moves is the selection of quarterback Josh Allen with the seventh overall pick of the 2018 NFL Draft and a trade that brought former Minnesota Viking Stefon Diggs to Buffalo. Allen is on pace for career-highs in his third season and has also garnered MVP consideration. Diggs currently leads the NFL with 90 receptions.

The Bills (9-3) return to action on Sunday night, as they battle the Pittsburgh Steelers at home (8:20 p.m. ET, NBC). In another sign of how far they’ve come under Beane’s watch, Sunday will mark the first time a Sunday night game has been staged in Orchard Park since 2007.