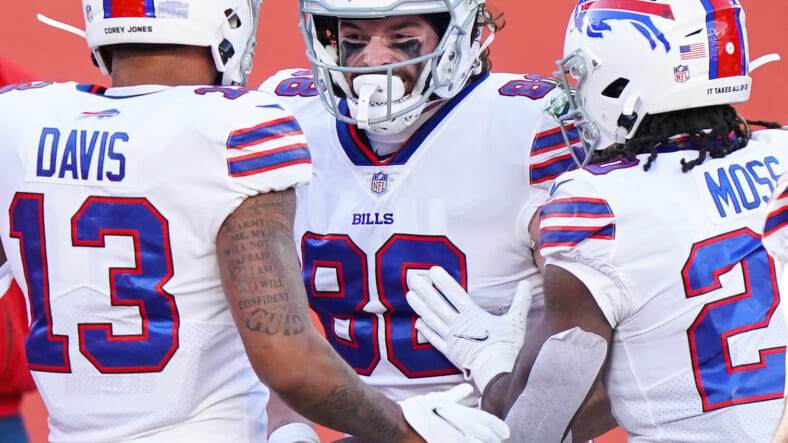 The Buffalo Bills’ Saturday win over the Denver Broncos allowed them to clinch their first division title since 1995.

After a 25-year sabbatical, AFC East supremacy is returning to Western New York.

Josh Allen tallied 392 total yards of offense, with 259 of his passing tallies going to Stefon Diggs and Cole Beasley. Jerry Hughes took back a fumble for a score, while Devin Singletary capped things off with a long touchdown of his own, giving the Buffalo Bills a 48-19 victory over the Denver Broncos on Saturday night in the Rockies. The victory allowed Buffalo (11-3) to capture their first AFC East division crown since 1995 and Orchard Park will likely host its first playoff game since the 1996 wild-card round. In closing yet another dubious streak, Buffalo has also won 11 games for the first time since 1999.

It’s the latest big accomplishment of the Brandon Beane/Sean McDermott era, one that began back in 2017. The pair inherited one of the longest active playoff droughts in American sports, but have now made the playoffs in three of the past four seasons.

Appropriately, it was the on-field cornerstones of the Beane-McDermott regime that rose to the occasion during their historic evening, launching themselves up the ledgers of Orchard Park’s record books. Josh Allen put in 392 yards and four total touchdowns, the latter tie tying him with Jack Kemp for the most ground scores by a quarterback in team history (25) and moved into the top ten amongst all rushing scorers (passing Willis McGahee and tying LeSean McCoy). The Minnesota transfer Diggs began his Week 15 exploits by breaking his with Eric Moulds for Buffalo’s single-season receptions, creating an 11-reception margin with two more games to go. Diggs wound up with 147 receiving yards, joined in the brotherhood of triple-digits by Beasley (117), who is breaking the career-highs he set in Dallas.

McDermott’s former Carolina pupil Mario Addison was a constant backfield invader on defense, while undrafted gem Levi Wallace helped hold Denver’s potent rookie receiving pair in check, with Jerry Jeudy and K.J. Hamler combining for 23 yards on a reception each. A first-round choice, Houston’s Ed Oliver, likewise earned a sack and got an early pass breakup in. Only adding to the fairy-tale setting was Hughes’ march of glory, as one of the two leftovers from the lean years took back a Drew Lock fumble for six points. While the other, tight end Lee Smith, was denied a touchdown due to a penalty, Hughes’ six-pointer more or less kept the game in Buffalo’s control. Another Beane choice, running back Devin Singletary, put one last exclamation point, a 51-yard touchdown dash that served as the unofficial kickoff to Buffalo’s divisional title party.

The effort led to one of the biggest dominoes toppled in the Bills’ return to respectability. Buffalo has officially ended the stranglehold the New England Patriots held on the quartet, as they become the first non-New England to finish atop the four since Miami in 2008.

However, in their celebration, the partygoers made it clear: the AFC East, while spurring a celebration a quarter-century in the making, is nowhere their ultimate goal. Words weren’t even necessary to convert such a message. The Bills’ celebratory t-shirts commemorating the division title bore what’s sure to become an oft-repeated insignia: “Won Not Done”.

“(The shirt) says ‘won not done’. Everything is still in front of us,” Allen said of the slogan per Daniel Fetes of WHAM. “This just gives us an opportunity to give it a shot and that’s all we can ask for.”

“This team here, we’re on a mission,” cornerback Tre’Davious White added in a report from Jenna Callari of WKBW. “I can feel it.”

But in more jovial matters, Saturday’s victory was a strong culmination of brotherhood and perseverance. No one can deny that this is a team whose camaraderie is riding at an all-time high as the most important games of their NFL careers approach. It was a development seen in the preparation for Denver, as the Bills turned Winter Storm Gail into a battleground, partaking in a snowball fight after practice earlier this week.

Expectations will widely vary with this Buffalo squad. Some see them as the biggest threat to a budding dynasty in Kansas City. Others feel like this they should be satisfied with topping the eastern quartet, confident that they’ll be a staple on the AFC bracket for years to come.

Either way, the Bills have made it clear…whatever they do in the near future, they’ll be doing it as a family…a family that has ended some of the most dubious streaks in professional football.

“Buffalo has been waiting for this for 25 years. It’s just special. It’s just an unexplainable feeling,” offensive lineman Dion Dawkins said in Callari’s report. “It’s a family, a family that stays together will win, cherish, and conquer it all. This was just step one.”