Who Poses the Greatest Threat to the Brooklyn Nets’ Championship Hopes? 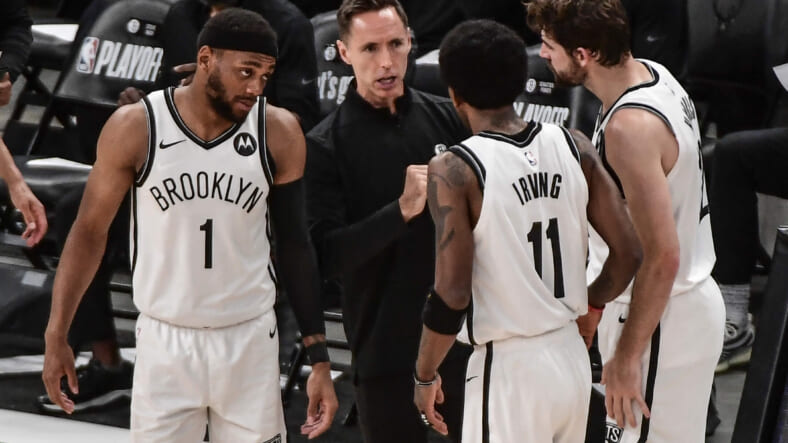 Despite coming up short once again in the playoffs last season, the Brooklyn Nets grew a lot stronger over the course of 2021. Even with all of the turnover and injury setbacks their lineup endured, the Nets found a way to play elite basketball, win games, and develop the chemistry a team needs to succeed at the highest level.

This feat was accomplished in a variety of ways, starting first and foremost with their Big 3 in Kevin Durant, Kyrie Irving, and James Harden. Whether they play all together or not, these three superstars proved just how unprecedented their impact is with their unique and highly gifted array of skills they offer individually.

However, outside of the superstardom that comes with their Big 3, the Nets put in a lot of time and energy to assemble a core unit of role players that can provide the essential ingredients of success this teams needs to win a championship.

This summer, the Nets decided to build on that by not only capitalizing on a good draft, selecting bright rookies like Cameron Thomas and Kessler Edwards while trading for Day’Ron Sharpe. But they also signed playmaking point guard Patty Mills, acquired defensive experts in James Johnson and DeAndre’ Bembry, and over this past week alone, signed Paul Millsap, brought back LaMarcus Aldridge to a one-year deal, and traded DeAndre Jordan to the Pistons for Jahil Okafor and Sekou Doumbouya.

With just about all of the talent and depth they need, the Nets have emerged as the favorites to win the NBA Finals in 2022. But despite such, the road to get there won’t be an easy one as a handful of Eastern Conference teams look to establish their own legacy with championship glory.

Without further ado, here are the Top 3 Eastern Conference teams that pose as the greatest threat to the Nets title hopes this season:

As shocking as it might seem, the Miami Heat are a playoff underdog this season. Similar to that of the Nets, the Heat grew much stronger over the offseason, adding key players to bolster a lackluster offense and reinforce their Top 5 defense.

At the forefront of their new acquisitions is veteran point guard Kyle Lowry, a sharp two-way player that brings scoring versatility and playmaking creativity to a Heat guard unit that lacked both last season.

Following his final year in Toronto, where he posted 17.2 ppg, 7.3 apg, 5.4 rpg, and 1.0 spg to top it off, Lowry doesn’t bring the flashiest numbers but provides enough offensive prowess and defensive edge on the perimeter that make him a really nice fit in Miami.

In addition, the Heat added two stretch power forwards in P.J. Tucker and Markief Morris, injecting stout three-point shooting and lock-down defense into their rotation as well. With Victor Oladipo looking to make a big comeback, be it off the bench or as a starter, the Heat pose a lot of tough matchup concerns defensively for the Nets, particularly along the perimeter.

The Nets can certainly take down the Heat in six games or less, but a lot rests on their offensive efficiency to overcome the Heat’s defensive fortitude and offensive balance from the wing and inside. This Heat team is well-coached, has a plenty of veteran experience, contains depth filled with youth, athleticism, and potential, and possesses a level of grit and unselfishness to succeed at the highest level.

And following a rough playoff exit against the Bucks last season, the Heat are seeking redemption and should not be overlooked.

At number two is the Atlanta Hawks, and for a good reason. After sealing the 5th seed in the East with a stout 41-31 record to show for, the Hawks surpassed postseason expectations with a remarkable playoff performance that eventually came to an end in the Conference Finals against the Bucks.

From their walking-highlight-reel point guard in Trae Young, to the versatile and athletic heroics of John Collins, to the rebounding and defensive proficiency from Clint Capella, the Hawks have a tough and imposing big three that comes along with a lethal offensive supporting cast.

Whether it’s Kevin Huerter, Bogdan Bogdanovic, Danilo Gallinari, Lou Williams, DeAndre Hunter, or Cam Reddish, the Hawks are stacked with shooters and depth that can certainly contend with just about any offense in the league, including the Nets themselves.

That said, the Hawks are certainly not as defensively durable as other Eastern Conference teams, which is an advantage the Nets could certainly exploit with their very own big three.

However, the Hawks found a way to shut down the Knicks in five games, scrape by the 76ers in seven games, and just fell short to the Bucks in six. And considering how young and well-balanced their team is offensively, the Hawks are a major threat to any Eastern Conference contender as they strive to accomplish their first Finals appearance since 1961.

Outside of the fact that they are the defending champs, the Milwaukee Bucks have proven just how elite they can be on both sides of the ball. Spearheaded by their athletic, freak-of-nature-of-a-superstar in Giannis Antetokounmpo, both Khris Middleton and Jrue Holiday played influential roles with assisting their best player in achieving the Bucks’ second championship title in 50 years.

But what tops off the greatness of this team really comes down to the role players the Bucks have that insert their dominance with passion and embrace their responsibilities for the pure sake of winning. Be it Brook Lopez, Pat Connaughton, Donte DiVincenzo, Bobby Portis, or Jeff Teague, each one of these players have become integral for the success of this team, making for the Nets toughest opponent this season.

Though Durant nearly took down the Bucks single-handedly in a seven-game series last season, the dynamic of the Nets’ offense will significantly differ come this next postseason with the consistent presence of a healthy Irving and Harden in the mix, posing new challenges for the Nets against much better defensive teams like the Bucks.

With Harden and Irving lacking the defensive grit and resilience on the perimeter, interior defenders such as Durant, Claxton, Griffin, Millsap and Aldridge will constantly need to crash on driving guards while attempting to close out on drifting forwards in and outside of the paint in the process. That’s simply not easy for any defender to manage, and this concern makes for the biggest test towards this team’s ambitions.

Though the Nets could upend the Bucks’ playoff hopes in a six or seven-game series, the defending champions have tasted what it’s like to win a ring. And with the hunger for another championship run, along with all of the talent they bring to the table as is, the Nets’ greatest foe in the East is none other than the Milwaukee Bucks.