On This Day Last Year: The Brooklyn Nets Take a 1-0 series lead on 76ers 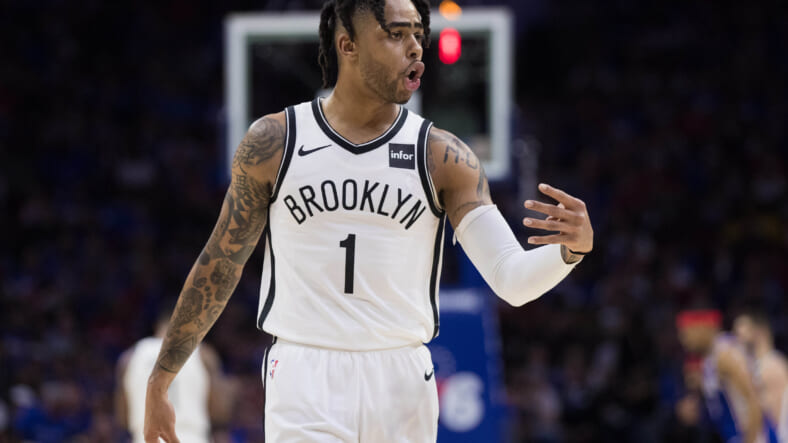 Apr 13, 2019; Philadelphia, PA, USA; Brooklyn Nets guard D’Angelo Russell (1) reacts to his bench during a break in the second quarter against the Philadelphia 76ers in game one of the first round of the 2019 NBA Playoffs at Wells Fargo Center. Mandatory Credit: Bill Streicher-USA TODAY Sports

A look back to this day last year with the Brooklyn Nets taking on the Philadelphia 76ers.

What turned out to be a dominant game on both ends for Brooklyn, they respectively won the scoring battle in the 1st quarter by 9 points and the 3rd quarter by 3 points, only losing the 2nd and 4th quarter by a combined 3 points.

D’Angelo Russell led Brooklyn with 26 points and 4 assists, while Caris Levert scored 23 of his own in just 23 minutes. Ed Davis was a monster on the boards, grabbing 16 rebounds and pouring in 12 points off the bench. Brooklyn had 6 players in double digits that night.

While Jimmy Butler (36 points) and Joel Embiid (22 points) both had solid scoring nights, Brooklyn stymied the rest of the 76ers, even limiting Ben Simmons to just 9 points. The only other player in double figures for Philadelphia was Boban MarjanoviÄ‡, who finished with 13.

The Nets would go on to lose the series in 5 games, dropping four straight after their Game 1 win. Once Philadelphia modified their game plan to start attacking the rim, the momentum of the series shifted. Jarrett Allen and Ed Davis were no match for all-star center Joel Embiid, who, along with MarjanoviÄ‡ and Ben Simmons, tortured the Nets inside for most of the series.

This would turn out to be D’Angelo Russell’s last several games with Brooklyn, who was magnificent for Brooklyn the majority of the year. In the off-season, Russell would go on to be traded to the Warriors, a move that allowed the Nets to acquire Kevin Durant and sign Kyrie Irving as the point guard of the future.

We look back on the Nets season last year glowingly, as a team that overachieved through gritty play and teamwork, with not a ton of skill on the roster. While it’s easy to remember the emergence of guys like Deangelo Russell and Spencer Dinwiddie, it’s also essential to recognize the contributions from key role players such as Jared Dudley, Ed Davis, Treveon Graham, and DeMarre Carroll, all guys that were dealt or let go this past off-season, but helped Brooklyn achieve, what many considered, a successful season.