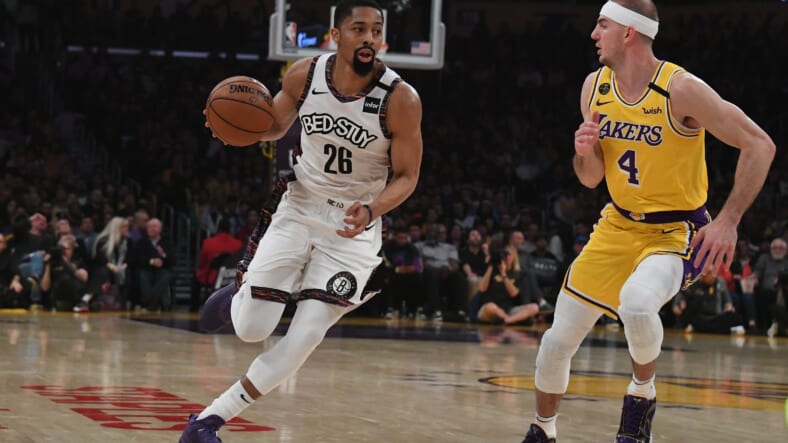 Oh man, what a way to start a road trip. The Lakers, coming off weekend wins against the Bucks and the Clippers, fell to the Brooklyn Nets yesterday, 104 – 102, in one of the more exciting games this season. Brooklyn played inspired basketball against one of the hottest teams in the NBA, featuring one of the hottest players right now in Lebron James, and came out victorious.

At the start of the game, it seemed as though only 2 Nets players had shown up to play. Caris Levert, who has recently demonstrated an intensity and efficiency to his game that we have not seen from him before this year, continued his stellar play.Â  But it was backup point guard/G League call up Chris Chiozza, who helped steady the Nets in that 1st quarter, giving them great minutes with Dinwiddie on the bench. The Florida alum was sensational, displaying a barrage of smooth, crisp passes to open teammates. Chiozza finished with 11 points and five assists in 17 minutes. Spencer Dinwiddie and Joe Harris got it going in the 2nd quarter, cutting a Lakers 11 point lead to 2 point lead right before the half.

Then in the 3rd quarter, everything started clicking for the Nets. The defense picked up for Brooklyn, as they were able almost to shut down everybody on the Lakers except Lebron, and they outscored LA 31 – 22 in the 3rd. Everyone from Caris Levert to Timothe Luwawu – Cabarrot made plays both on offense and defense. The Nets went into the 4th with a surprising 87-80 lead, something they haven’t done a great job at protecting this year.

The 4th quarter was electrifying. Anthony Davis came alive and, along with Lebron, carried the Lakers back to tie the game at 102 with a little under 50 seconds left. Dinwiddie, who had been called for offensive fouls on two of the last several possessions, isolated Avery Bradley and hit a tough go-ahead jumper on the left elbow to put Brooklyn up 2. After a Lebron missed a layup and 2 missed free throws by Deandre Jordan, the Lakers got the ball back down 2 with 5 seconds left with a chance to tie or win. Brooklyn fans gasped as Lebron drove down the lane and kicked it to a wide-open Anthony Davis in the corner for a 3 to win the game, but fortunately, Davis clunked the shot and sealed the upset for Brooklyn.

Key performances for the Nets:

This was a significant win for Brooklyn not only for the guys on the court but for Kevin Durant to witness off the court, who traveled with the team on this four-game California road trip. KD and Kyrie need to see this team win without them, especially against a juggernaut like the Lakers. Vaughn has been impressive in his short tenure as coach with rotations, and the Nets have put forth a fantastic team effort for him in these last few games.

The Nets play the Warriors on Thursday at 10:30 pm EST (who will most likely honor KD in some type of way) followed by the Clippers on Friday night and the Kings on Sunday.