Brooklyn Nets: Breaking down the Nets Final Preseason Win against the Celtics 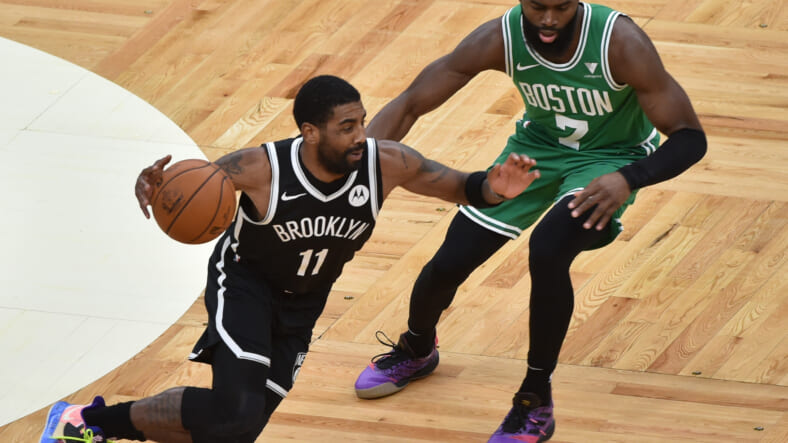 If you’re a follower of Brooklyn Nets news, then you have probably seen the video of Kyrie Irving burning sage prior to the Nets’ final preseason game against the Celtics last night. Irving explained after the game, his “smudging” was meant to cleanse the energy in the arena but to0 many Nets fans, it may have had a slightly different meaning; a fresh start. Not since the early 2000s have Nets, fans had a team with this much hype and excitement around them. With a healthy Kevin Durant and Kyrie Irving, returning key contributors in Caris LeVert, Spencer Dinwiddie, Joe Harris, and Jarrett Allen, and adding Landry Shamet and Jeff Green in the offseason to round out this roster, stakes could not be higher for the Brooklyn Nets as we approach the regular season.

While the first preseason game belonged to Kyrie, Durant stole the show against the Celtics last night, scoring 25 points on 9-16 from the field in 27 minutes of action. Whether it was the pull-up three, blowing by his defender for the dunk at the rim, or the un-guardable mid-range shot, Durant showed to everyone last night that he hasn’t lost a step. But elite offense wasn’t the only feature Durant showcased last night; he also led the Nets with 3 blocks, several of them coming at the rim. If this is the Kevin Durant Nets fans will get this season, barring any health setbacks, then there aren’t many teams in the East who can claim their #1 is better than Brooklyn’s.

There have been several instances throughout the first two pre-season games where Kyrie Irving has shown his leadership among teammates. Yesterday, there were two specific scenarios. One came shortly after a Spencer Dinwiddie drive to the basket, of which there was contact with his defender but no call. This became a reoccurring theme for Dinwiddie throughout the night, as there were not many fouls called on his behalf. After a particularly physical drive, Dinwiddie was visually frustrated on the ground after not receiving the call, and an encouraging Kyrie Irving came over to him to pick him up. Seems subtle and small, but those are the types of actions that good teammates and leaders exhibit on a nightly basis.

The second moment came from Irving leading by example. After the Celtics went on a mini-run midway through the game, Tatum had just finished a sequence in which he had scored 5 straight points and rejected Spencer Dinwiddie on his drive to the rim. With the Nets only leading by 9, the smallest lead since the beginning of the game, Irving demanded the ball with Tatum covering him, immediately took him to the lane, and scored on a beautiful floater. You could feel the Celtics’ momentum vanish as the Nets would go on a scoring run of their own after that moment. These are the types of momentum swings that leaders like Kyrie and KD have to execute in order for the Nets to be dominant. Kyrie finished with 17 pts, 5 assists, and 7 rebs in 28 minutes.

There were several Nets outside of KD and Kyrie who performed exceptionally last night. Joe Harris had a huge “remember me guys?” moment early on in the game and finished with 14 points. Dinwiddie looked efficient with the starters, despite a 1-7 shooting night, picking his spots on when he should attack and when he should defer to the two stars on the team. And Jarrett Allen continued his excellent play in backing up Deandre Jordan (will return to shortly) with a stat line of 9 pts and 11 rebs. As for the two newcomers in Jeff Green and Landry Shamet, they have given Steve Nash some excellent minutes thus far. Shamet has looked sharp with the 2nd unit and moves well without the ball. Green, playing at the 5, has given the Nets a small-ball lineup with all 5 players on the court capable of hitting a three. TLC gave the Nets 11 solid minutes off the bench and has fought hard this preseason to crack this Nets rotation.

Obviously, the biggest story out of the Nets’ two preseason games has been how great Kyrie and KD have both looked. There needs to be something said about the fact that these guys complement each other’s games very nicely. KD can play with anybody, and Kyrie now feels he has an equal scoring counterpart on his team (sorry, Lebron). The supporting cast has looked exceptional, and Nash has done a great job of mixing and matching rotations in hopes of generating an optimal five players throughout the game. The Nets have dominated their opponents in both preseason games, but that doesn’t mean there aren’t questions about this team headed into the regular season.

For example, who will start at the center position, Deandre Jordan or Jarrett Allen? In two preseason games, Coach Nash has yet to insert Jarrett Allen into the starting lineup. Now, this is where many Nets fans have disagreed with Nash; anyone with eyes can see Allen has the ability to contribute much more than Jordan, both on the offensive and defensive side of the ball. Unfortunately, the narrative is that because Jordan has a close-knit friendship with KD and Kyrie, he will continue to start over Allen. This is something that may change if the Nets go on a losing skid early on in the season.

Another question Nash will have to answer is who will start alongside Kyrie, Spencer Dinwiddie, or Caris LeVert? Yesterday, we saw Dinwiddie get the start, who seemed to mesh well with Kyrie and KD despite the off shooting night.Â  LeVert led the 2nd unit and eventually would get some time with KD and Kyrie in the 3rd. While it seemed as though Nash’s strategy worked as LeVert managed to score 18 points in 21 minutes, the Nets are still unsure on who will start and who will come off the bench between the two.

Thanks for reading this article! Be sure to check out our Facebook,Â Twitter, andÂ InstagramÂ for your latest Brooklyn Nets news and listen to theÂ Fireside Nets w/ Spen & Nick podcast!