20 names in New York sports that made 2020 tolerable 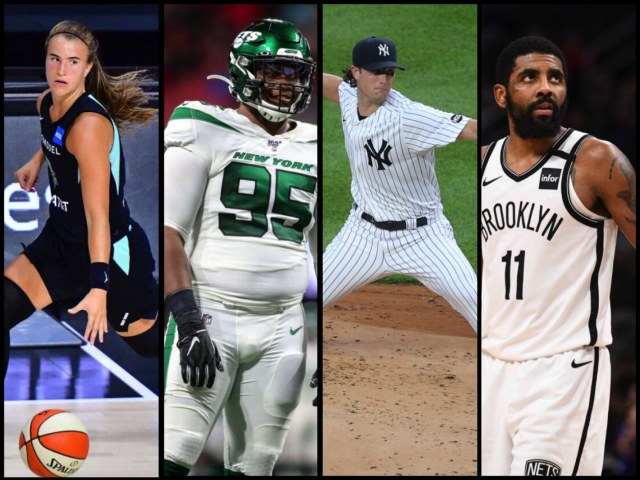 In 2020, we learned just how small sports were on the grand scale. Even so, these New Yorkers brought hope and joy to the beleaguered area.

“Auld Lang Syne” will hit a little differently this New Year’s Eve, as the country and the world entire prepares to bid farewell to one of the most brutal 366-day cycles in recent memory. The year even took away sports at one point in time, which might’ve almost been seen as a merciful act considering the modern endeavors of New York sports. Metropolitan athletics have consistently fallen far short of their inflated expectations. Save for the New York Islanders’ surprise trip to the NHL’s Eastern Conference finals, each of New York’s teams either endured early postseason exits or missed out entirely.

Yet, there were several names in the sports world, before and after the period of pause and reflection, that gave the metropolitan area hope in this brutal season. ESM bids farewell with 20 legends…

So brutal were metropolitan affiars this season that we had to turn to our friends in Western New York. But, unless you’re a Jets who has two annual meetings with Allen to dread for the foreseeable future, it’s hard not to appreciate what Allen has done for the Bills’ franchise, defying draft day expectations out of Wyoming and playing a vital role in ending their 17-year playoff drought and turning them into Super Bowl contenders. Entering Sunday’s regular season final against Miami (1 p.m. ET, CBS), Allen has broken Jim Kelly’s record for most touchdown passes in a single season of Bills football (34) and is within striking distance of Drew Bledsoe’s yardage record of the same variety. Allen has also taken home six Offensive Player of the Week Awards in his career (four this season), second only to the ten earned by the aforementioned Kelly.

As the New York Islanders go through a period of both transition and prosperity…being one of the rare metropolitan teams to experience postseason success in 2020…Barzal has evolved into a face of the franchise, taking over from the Toronto-based John Tavares. Appropriately, it was Barzal that informed the hockey world that the Islanders were going to be a problem in the bubble, scoring the game-winning goal in the their 2-1 win over Washington in the Eastern Conference quarterfinal round, a tally that gave the Islanders a 3-0 lead in the series. Ironically, Barzal’s moment of glory came in Tavares’ current stomping grounds of Scotiabank Arena.

The New York Jets have a lot of questions to answer once the calendar officially flips. But Becton, the Jets’ first-round choice (11th overall) out of Louisville is crossing one need off their offseason shopping list. Called upon to protect Sam Darnold’s blindside, Becton has become one of the most dominant young blockers in football, ranking at or near the top of several analytical rookie lists. The Jets aren’t quite sure who their quarterback is going come next September. They do know, however, that Becton will be serving as his security.

Formerly under general manager Dave Gettleman’s watch in Carolina, Bradberry came to New York with relatively little fanfare. He has since gone on to become one of the biggest reasons why the Giants have a shot at anotherwise inexplicable playoff spot. Bradberry has done his part to make sure that Big Blue is at least well represented in the SportsCenter Top 10, making several acrobatic interceptions that led to his first Pro Bowl nomination.

A lot of adjustment was required to make it through 2020, but the Mets remained their same disappointing selves, tying with the defending champion Washington Nationals for last place in the NL East. But, thanks to new owner Cohen, there’s legitimate hope in the organization for the first time in ages. The Great Neck-born hedge fund manager has immediately endeared himself to fans with promises to use his surplus budget in free agency (which manifested early with the signing of James McCann), his willingness to clean house shortly after his arduous purchase was completed, and his lighthearted interactions with supporters on Twitter.

The shortened seasons denied Yankees fans the full Cole experience in the early going, but it’s safe to say the newly minted $324 million man lived up to the hype. He saved the best for last, earning a 1.00 ERA over four starts in September and later struck out 13 without a walk in the Yankees’ Wild Card Series win over Cleveland. Such a feat had been accomplished since Tom Seaver’s endeavor in the 1973 NLCS.

The trade for Diggs feels like it happened years ago, as do all the tweets and thoughtpieces that claim the Bills gave up too much for the former Minnesota Viking. But the Minneapolis Miracle worker has made the four-pick exchange worth it, even erasing the fact that the Bills missed out on rookie sensation Justin Jefferson. Like Allen, Diggs is rewriting the Bills’ record book, breaking Eric Moulds’ former marks for single-season for receptions (120) and yardage (1,459). Both of tallies lead the NFL entering the final week of the regular season.

Brooklyn Nets fans received a bit of a special Christmas gift this year, as they were finally treated to Kevin Durant’s debut in black and white. Teamed up with Kyrie Irving, the ten-time All-Star hasn’t lost a step, putting 28.3 points and 5.8 rebounds over his first four games. Durant apparently saved the best for first, torching his former compatriots from Golden State for 22 points on opening night before scoring 29 in a Christmas win over Boston.

The draft lottery has turned into a cruel custom for the blue and orange hardwood representatives in New York, but the Liberty hit the jackpot with the drafting of Ionescu in April. The city didn’t get the full Ionescu treatment in her rookie season, with an ankle injury limiting her metropolitan antics to three games. But the Oregon alumna is on pace to be a true face of women’s sports in the area, with her jersey sales ranking fourth in the WNBA this season. Ionescu gave her new Brooklyn fanbase something to be excited about before fate stepped in, scoring 33 points in only her second career contest.

Irving’s 2020 heroics likewise required patience. He partook in only 20 games during the shortened 2019-20 campaign (none of them during the Nets’ endeavor in Disney World) but managed to drop 54 points (on 19-of-23 shooting from the field) in a January win over Chicago. Irving likewise emerged as one of the most vocal voices in social change alongside his basketball brothers and sisters. He was more than willing to carry on his basketball antics on the court once he was ready to get rolling again, torching the Celtics for 37 points on Christmas.

Perhaps no one defined the 2020 New York Liberty sense of resiliency and development better than Jones. Bookending the first round of the 2020 WNBA Draft with Ionescu, Jones took full advantage of relatively consequence-free basketball, making herself essential when the Liberty’s plethora of veterans potentially return in 2021. The Louisville alumna took over point guard duties after Ionescu went down, resuming a role she last played during her high school days at Florida A&M University’s Developmental Research School. She put up 10.8 points, 4.1 rebounds, and 1.4 steals per game, earning a spot on the league’s official all-rookie team.

Signer of a six-year deal to remain an Islander before the season started, Nelson became one of the team’s most reliable and clutch performers during their run to the conference finals. He scored three game-winning goals and finished second on the team in postseason points with 18.

The second attempt at XFL feels like an endeavor from years ago, but briefly took over the February calendar with a slate that wound up lasting five games. It allowed MetLife Stadium to enjoy at least some form of victorious football, as the local Guardians won each of their two games at the venue. Their defense was particularly strong, as Cavon Walker led the league in sacks (4.5) and six different defenders earned at least one interception.

If there was ever a year to not take risks, 2020 was certainly at, or at least near, the top of the list. Despite Panarin’s many talents, many saw the Rangers’ seven-year, $81.5 million deal with the former Blue Jacket (a smaller price tag after Panarin spurned the Islanders) as too much dedication to a single player. But Panarin lived up to the massive deal, finishing off the shortened season with a career-best 95 points (good for a third-place tie on the NHL ledger).

As a Rutgers alum, New Jersey native, and the man who took Tom Brady’s final New England throw back for a touchdown, Ryan seemed destined for a metropolitan collaboration. The Giants took the plunge shortly before the season began, and Ryan has rewarded them with a strong showing that has included good coverage, 91 tackles, and an interception that clinched the season sweep against Washington (which will come up big if the two sides tie for the NFC lead after Sunday). It has been an emotional season for Ryan, whose wife Ashley endured an ectopic pregnancy. Ryan later inked a three-year deal to stay with the Giants on Christmas Day.

The National Women’s Soccer League was the first North American team sports league to make its return this summer, staging its annual Challenge Cup festivities in Utah. Sky Blue FC, their debut season at Red Bull Arena pushed back due to obvious reasons, had struggled in recent years but put on a strong showing with a fourth-place finish. Sheridan was the driving force behind the effort, winning the tournament’s Golden Glove award to the tune of three shutouts. Sky Blue also had a respectable showing in the NWSL’s fall showcase, earning a matching fourth-place mark.

Wishing someone association with the James Dolan-owned sounds like a punishment one would avoid giving their worst enemy…at least their worst hardwood enemy. Thibodeau, however, returns to the ranks of head coaching to face what’s his toughest challenge yet. But, unlike his predecessors, it appears Thibodeau has a plan for the Knicks moving forward, seeking to change the culture and build a team-centered atmosphere. So far, it’s played in the Knicks’ favor. The team has played competitively in the infantile stages of the season, sitting at 2-2 after the first four games (including a dominant win over Giannis Antetokounmpo and Milwaukee). They’ll have chance to end the season on the right note on Friday night against Toronto (7:30 p.m. ET, MSG).

The jokes against Islander goaltending officially ended, or were at least put on hold, through Varlamov’s efforts. He came up with several big saves during the playoff trek and was one of only six goalies inside the Canada bubbles to record multiple shutouts. His 2.14 goals against average was also fourth amongst goalies with at least 10 playoff starts.

Williams retook control of the narrative surrounding his career, as many felt he was destined to be a bust after struggling in his rookie season (and with Pro Bowler Josh Allen going shortly after him). But Williams responded with a stellar sophomore season, leading all interior defensive linemen in both traditional and analytical categories as one of the most consistent backfield invaders in the league.

Zibanejad is perhaps responsible for the most dominant one-man effort of the 2020 sports season, tallying a jaw-dropping five goals, including the overtime winner in a March win over the Capitals. The yield from one of the biggest robberies in New York sports memory (the biggest loss being Derick Brassard to Ottawa in the trade), Zibanejad again put up his best numbers despite a shutdown, scoring 41 goals (fifth in the league) in 57 games.