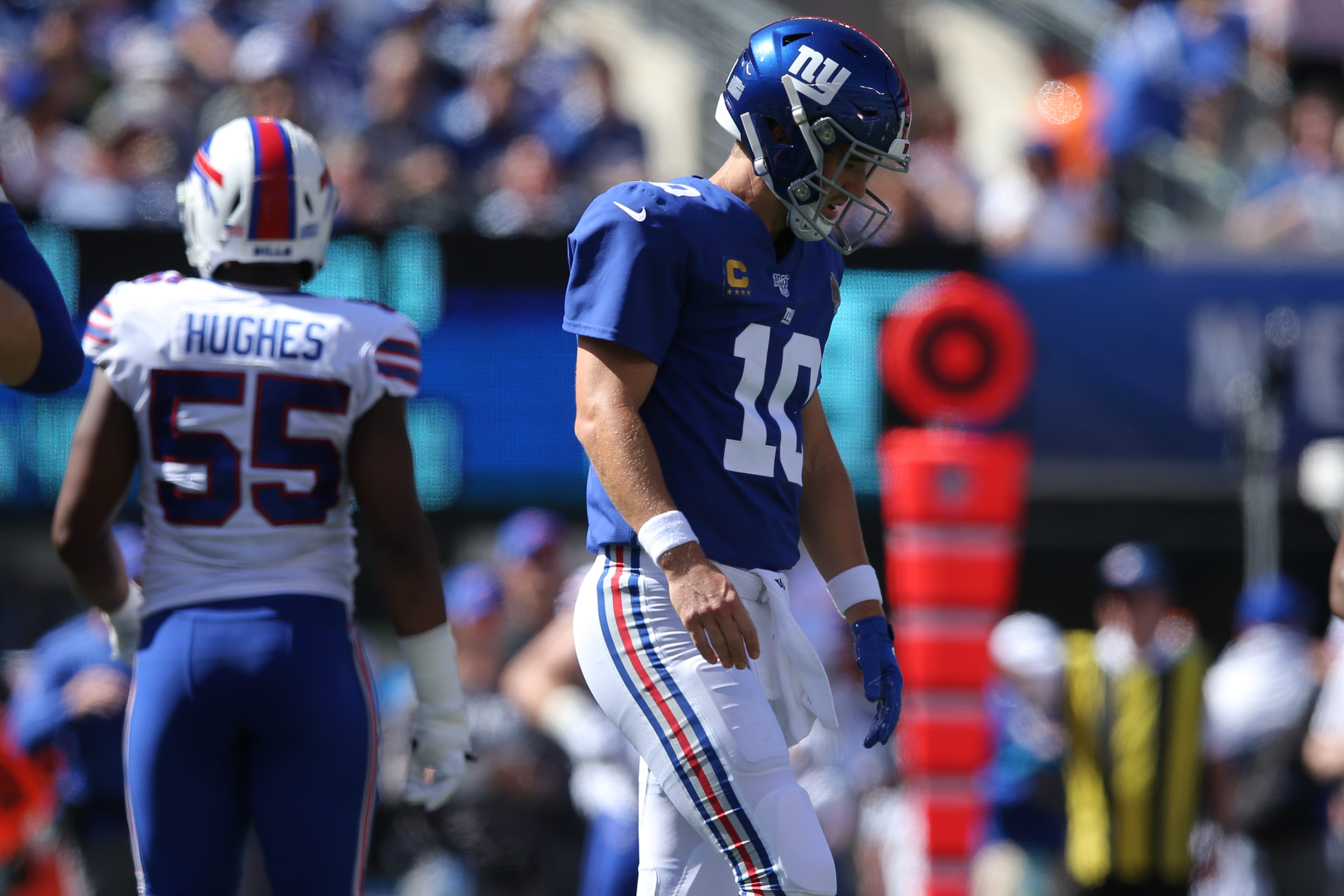 With the 4th quarter winding to a close and the New York Giants facing a 4th-and-10 down 14 against the Buffalo Bills on Sunday afternoon, veteran quarterback Eli Manning threw a pass to a wide-open Gatorade cooler on the sideline.

His experience and knowledge should, at the very least, give him the innate response to give his pass-catchers a chance on what was their final possibility at salvaging a potential comeback. Manning finished with 250 yards, one touchdown and two interceptions on the day.

Most will say Manning lacked offensive weapons to utilize, but failing to throw a catchable pass on 4th-and-10 down two scores is inexcusable. A mental mistake that cannot happen 15 years into your career with two Super Bowls notched on your belt. Also, Eli had multiple tipped passes at the line of scrimmage, primarily because of his failure to move through progressions and obsessions with staring down his receivers. We saw a similar performance in week one of the regular season against the Dallas Cowboys.

Factoring in these reasons, the Giants might be better off starting rookie passer Daniel Jones, allowing him to gain valuable experience and begin to adapt to the physicality and speed of the NFL.

Jones offers more than just a strong arm; he is athletic and can pick up yards with his legs. The play-action would be more lethal, and he would open up the opposing defense, forcing them to keep an extra player near the line of scrimmage to ensure he doesn’t take off running.

However, the primary reason is gaining experience. Theoretically, if the Giants are willing to throw rookies DeAndre Baker and Dexter Lawrence into the mix, they should be confident in Jones and his abilities to replicate Manning’s production and more.

Is Eli Manning finished with the New York Giants?

Before the beginning of the season, Manning was reportedly featuring a stronger arm. That newfound attribute has yet to be seen, considering his 6.275 yards per attempt. While his pass-catchers are dropping like flies and home-field advantage doesn’t seem to exist for the Giants, Manning’s days are not only numbered but winding down to a close.

With the future of the franchise already on the team, why wait and hinder his ability to develop? The time is now to make the change. 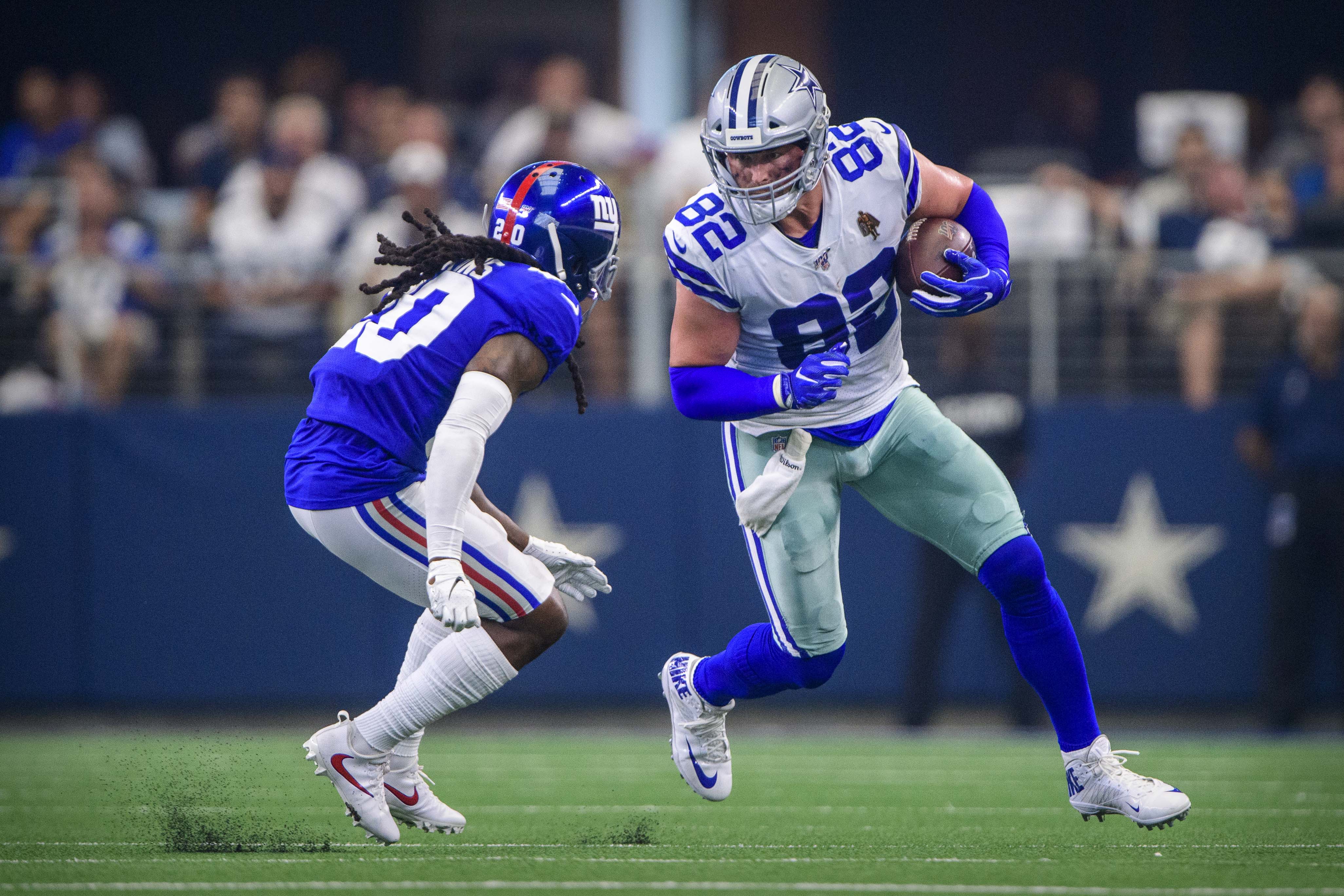 Two seasons ago I might have considered New York Giants CB Janoris Jenkins’ comments ludicrous, but it’s hard to avoid the truth behind the defensive struggles over the last two weeks. While a majority of the blame lands on the secondary, the pass rush for Big Blue has been below-average.

With just three combined sacks (all coming in week 2) in two games, the pass rushers are playing a severe factor in the demise of the defense. Markus Golden recorded the team’s first sack against the Buffalo Bills but failed to make a significant impact beyond the one highlight.

Jenkins, the Giants’ top corner, spoke out after the game concerning the lack of pressure on opposing quarterback:

When you’ve got time [to throw] and you ain’t getting no pressure, I can’t cover nobody for 10 seconds,” Jenkins said, per Darryl Slater of NJ.com. “Who can cover somebody for 10 seconds? Go look at the first five seconds of the route. He’s not open. If you’re scrambling and there ain’t no pressure getting there, what do you want me to do? I can’t cover this side and that side. Come on, bro. We’ve got to play football around here.

The Giants travel to Tampa Bay next Sunday to face off against an underwhelming Buccaneers team, a very winnable game. With several receivers missing games and quarterback Eli Manning throwing to a bunch of misfit toys, the offensive production will inevitably be limited. That will leave the defense to pick up the slack, and it ultimately starts with the men upfront. 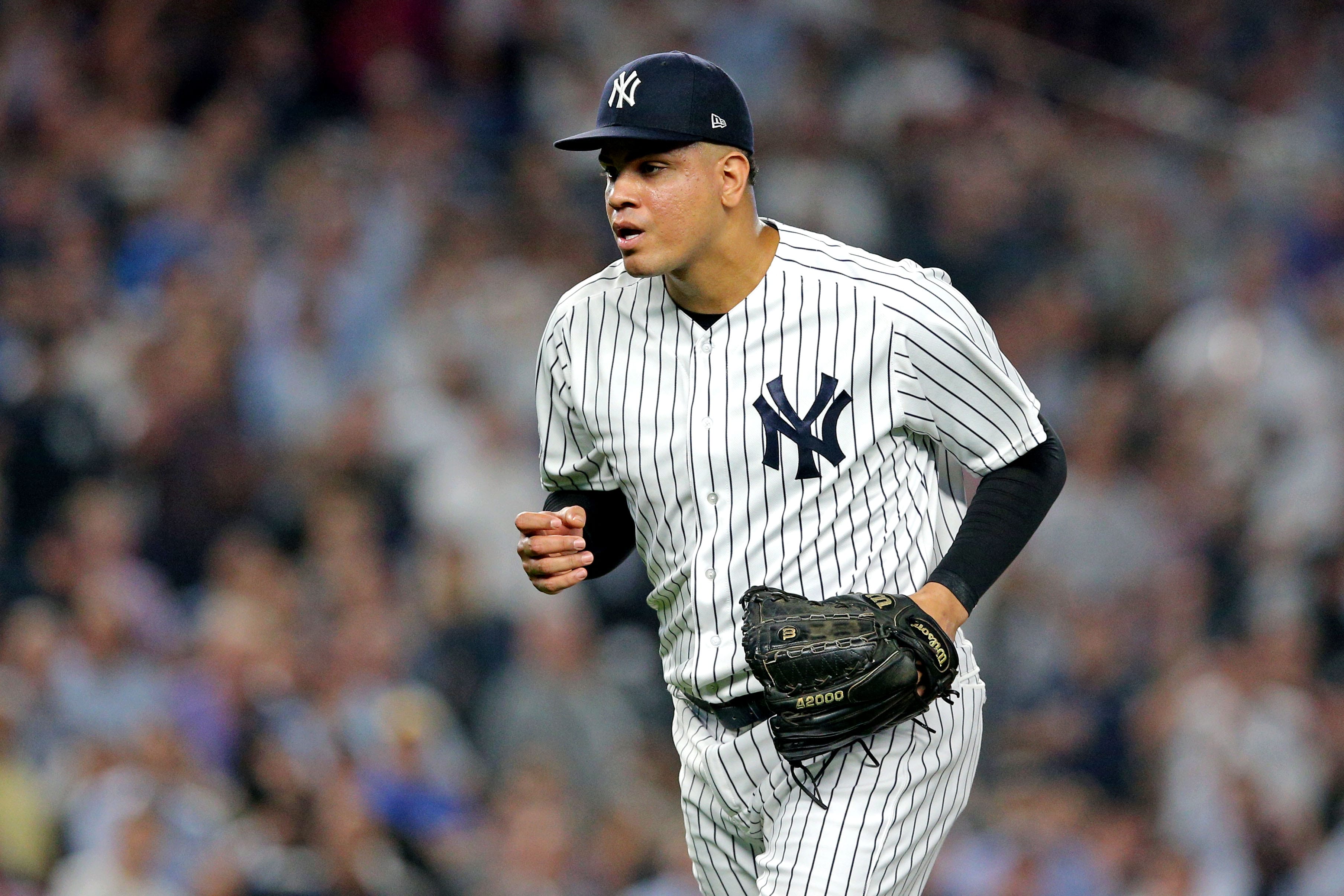 With the New York Yankees closing in on home-field advantage for the playoffs, gaining back two influential pitchers will only assist in their success moving forward. Despite losing to the Blue Jays 6-4 on Sunday night, the Bombers trotted out two players who have missed the entire season up to this point.

Both Dellin Betances and Jordan Montgomery made their season debuts, and while one struggled, throwing 41 pitches, the other dominated, striking out both batters he faced.

Montgomery drew the short end of the stick, allowing three runs in his first action of the year. Betances was painting corners and looked like his former self, an excellent sign for the Yankees as the end of the regular season dwindles to a close.

While Jordan’s return wasn’t as he hoped, just getting on the mound was cause for celebration.

“Excited to get out there after I put in all the hard work to get back,’’ Montgomery said, per NorthJersey.com.

“I was ahead of a lot of counts, I just have to finish pitches.”

“That’s a long road back,’’ said manager Aaron Boone. “To put himself in this position, a lot of credit goes to Monty.’’

Nerves certainly played a part in giving up three runs against a hard-hitting Toronto team. Montgomery will surely bounce back and begin to fall back into his usual routine. It will take a few games to shake off the rust and gain back his confidence on the mound, but just throwing a few pitches was a massive boost to the bullpen.

Also, the Yanks will return ace, Luis Severino, this week, another huge addition that will influence their success during the postseason. Factoring in Severino, Betances, and Montgomery should give the Bombers a better chance at progressing through the postseason and making a World Series appearance.

They have the run support, and with slugger Giancarlo Stanton nearing a return, there’s no question the team has the quality and power to blow their way into the pennant.