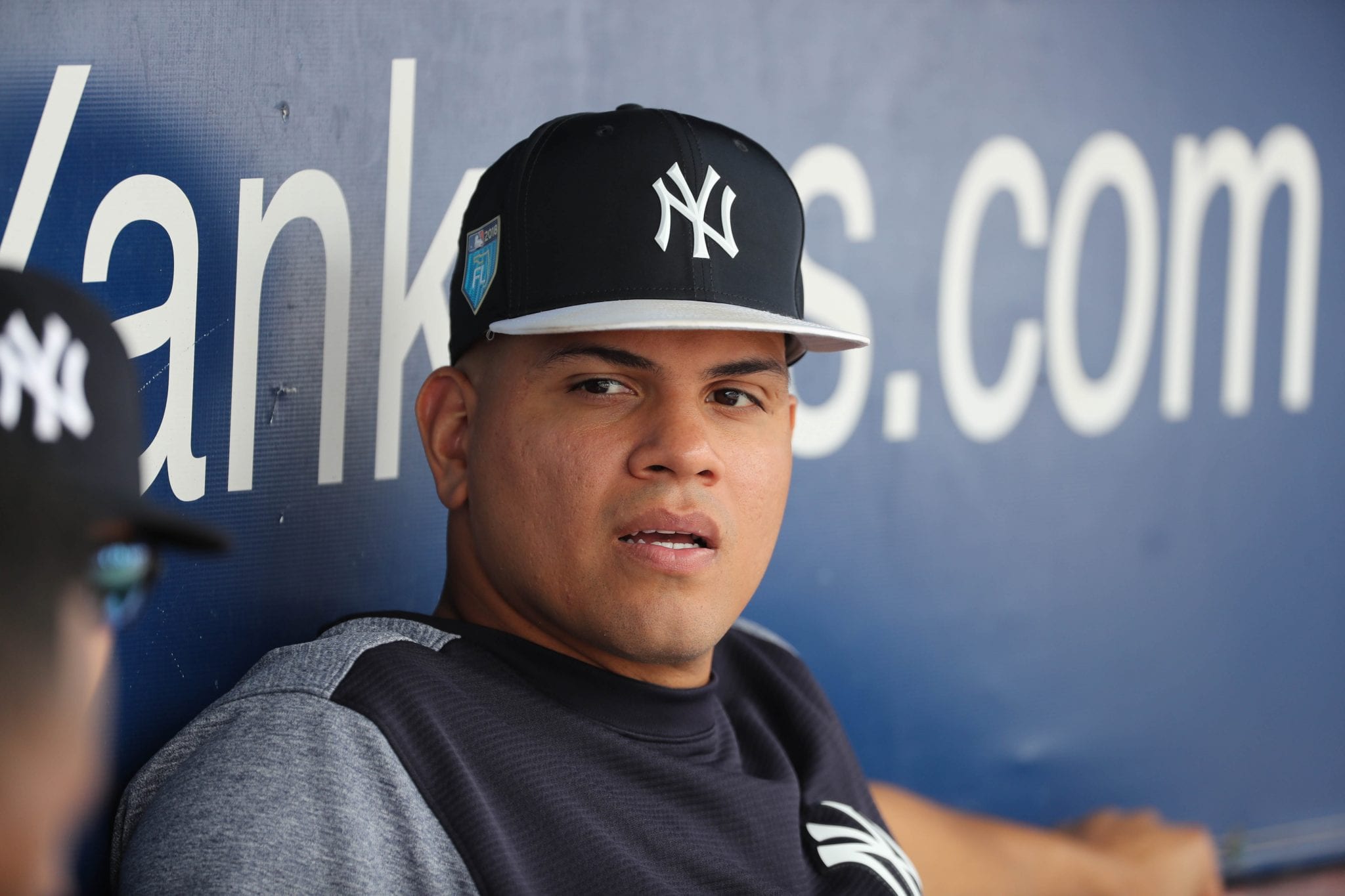 The New York Yankees played a hard fought game today. CC Sabathia in his first start had some command issues ,but put together a solid start for the Yankees. He kept them in the game and would not give in to the Blue Jays. Tyler Austin supplied all of the Yankees runs today. This is the first loss of the season for the Yankees, but the Yankees proved they will be in every game. The main problem for the Yankees was Dellin Betances who had alot of control issues and looked similar to himself from last season.

Before the Yankees scored any runs today they got a scare when rookie Billy McKinney crashed into the left field video board and had to be taken out of the game.

Billy McKinney is shaken up after a nasty collision with the left field wall. pic.twitter.com/6lOLL7V3wh

The offense today was basically Tyler Austin. In the fifth inning with the Yankees trailing by two runs Austin smacked a game tying homer off of Blue Jay starter Marco Estrada.

OHHHHHH BABY!@T1721Austin sends one to the MOON to tie the game! 😱

The Yankees third and final run came on Austin’s second homer of the game which was a game tying one in the seventh.

SECOND dinger of the game.@Yankees tie it back up at 3-3.

CC Sabathia looked pretty good in his first start of the 2018 season. He did surrender and early lead to the Blue Jays when Justin Smoak hit a single that scored Josh Donaldson in the first. Besides the first inning run CC pitched a decent game for the Yankees.

Adam Warren came on in relief of CC in the sixth for his first appearance of the season. After retiring the first batter he faced and walking the next Warren got the second out ,but was injured on the play. Jays shortstop Aledmys Diaz hit a sharp liner off of Warrens right foot. Warren existed the game and was replaced by Jonathan Holder.

Holder served up a a two out single to catcher Luke Maile. Dellin Betances then entered the game in the seventh and pitched a dominate inning. Betances was helped out by catcher Gary Sanchez on the second out of the inning. Sanchez fired a laser to Didi Gregorious at second to catch Curtis Granderson trying to steal second.

The trouble for Betances came in the eighth inning. The first batter of the inning Yangervis Solarte blasted a solo go ahead homer off of Betances. He then recorded two outs and a single to Kevin Pillar. Pillar then stole second with Luke Maile batting. Maile was then walked by Betances. With Gift Ngeope batting Pillar stole third and Maile stole second. Then Pillar stole home for the Jays fifth a final run while Maile advanced to third. Betances got Ngeope to strike out ,but the damage was done and the Yankees went down 1,2,3 in the top of the ninth.

Todays player of the game is Justin Smoak. He had a dominate day at the plate and recorded his first two RBI’s of the season.

The wild card on the New York Yankees is Dellin Betances. He has all the tools to be a dominate pitcher, but he consistently finds himself in trouble. Betances had a up and down season in 2017 which proved his inconsistency.

The main problem for Betances is mental. When he gets in trouble his expressions tell everything. If Betances can return to form he will make the Yankees bullpen a whole lot deeper.

Betances is a native New Yorker who was born in Washington Heights. He attended many games at the old Yankee Stadium. He attended High School at Progress in Brooklyn. Betances was an Aflac- All American in his junior year. He decided to attended Vanderbilt, but the Yankees picked him in the 8th round of the 2006 draft. Betances was given a one million dollar signing bonus with the Yankees and did not go to Vanderbilt.

Betances was orginally a starter in the Yankees system, but after he had control problems the Bombers made him a full-time reliever. Betances had a nickname in the Yankees’ system along with former top prospect Manny Banuelos, they were called the “Killer Bees”. Betances made his debut on September 22, 2011.

Betances spent all of the 2012 season in Scranton. He also played a majority of the 2013 season Scranton. He was recalled to the Yankees when roster expanded in September and only pitched in six games.

He made the Yankees Opening Day roster in 2014 and had a fantastic season. Betances earned his first All-Star game appearance along with Masahiro Tanaka. On September 17, he surpassed Mariano Rivera’s record for strikeouts by a relief pitcher with 131. Betances finished the season third in rookie of the year voting for the 2014 season.

Betances followed up the 2014 season with an amazing 2015 season. He split time with Andrew Miller in the closers role. Betances was the first Yankee in history to record back to back 100 strikeout seasons. He also earned his second All-Star Game appearance.

Betances had a nice 2016 season and was selected to his third All-Star team. For the first-half of the season Betances along with Andrew Miller and Chapman made up No-Runs DMC. Betances also recorded 100 strikeouts in his third consecutive season.

Betances had a very rough season last year. He was wild throughout the campaign and that extended into the Postseason. The highlight of his season was on August 2nd. He pitched an immaculate inning against the Tigers. Fans were nervous every time he entered the game because it was an adventure.

Betances will be used in the set-up role or if Champan needs rest as the closer. If Betances can get his emotions under control then he will be able to return to his old self, a strikeout machine. Betances needs to use his fastball more instead of relying on his curveball. He also needs to limit base runners because they easily steal on him. Betances has the opportunity to have a rebound year and I think he will have achieve that.