The 2021 Tottenville high school womenâ€™s lacrosse team refused to let a global pandemic stop them from playing the game they love.Â

Staten Island, NY- The last time the Tottenville Pirates lacrosse team played a PSAL game was in May of 2019. The team had just lost the game in the city championships to Fort Hamilton and most believed that would be the hardest thing they would have to endure through in their young lives.Â

Unfortunately, there was something looming larger in their future.

The Covid-19 pandemic would shut the city and the country down. The upcoming PSAL lacrosse season, along with all high school sports, would be canceled for the 2020 season.

3rd-year head coach Megan Kane, a star player for Tottenville when she attended the school, never thought her next season would be canceled.

Coach Kane had the tireless job of trying to keep her team intact knowing at the same time that her seniors would be graduating without ever playing another high school varsity game. Â She even managed to have an “unofficial” senior night in an Applebee’s parking lot to recognize the girls that would be graduating that year.

Â A year later and a surprise announcement

In February of this year, the Department of Education and the PSAL announced that they would have an abbreviated PSAL season in all sports. Coach Kane would have the opportunity to coach a new batch of players and see her seniors gave one more season to play. Â For the new members of this team, they would now have a chance to experience playing varsity lacrosse.

The logistics to play were a huge hurdle for this team and the school to overcome. Three weeks of conditioning followed by three more weeks of practice, which included Covid testing, was a challenge the girls had to deal with if they wanted to play this year.

How this team was built

When this season began the team had just seven seniors and only four players who were on the team from 2019 championship game.

The rest of the team would have to learn on the fly to adjust to the different speeds and technical positioning they have never experienced before.

Led on to the field by senior captains Alyssa Curto, Oliva Helf, Sierra Rogers, Â Kailey Giasi, Chelsea Mc Keon, and Nicole Gatto, the responsibility to help the underclassman on and off the field landed on their shoulders. Long runs, hard practices, and the ongoing learning of the game were the daily grind the team endured. It was a road these girls took that propelled them back to the game that was in doubt months earlier.

The constant reminder of being shut down due to a positive covid test wore on the minds of these girls every day. They could ill afford to have a case surface within the team as the team knew there would be no rescheduling of games if they had a game canceled.

The girls had to take Covid tests before practices and at one point during practice. Â These Pirates just kept the eye on the ball ( lacrosse ball that is) and did whatever needed to keep playing. They were also required to wear their masks even while playing games, something that was difficult to adjust to, but a necessary policy to stay on the field.

Together as a team, the Pirates formed a bond to stand talk against whatever was thrown their way. They have an undeniable ability to have one anotherâ€™s back during games.

It’s June 11 and this year’s senior day is back where it belongs. Â On the field of Tottenville HS. Â The senior’s pictures have all been hung on the fence behind the player’s bench with balloons and ribbons waving through the wind. Parents and friends are cheering the girls on, fans attending games was another last minutes decision by the powers in charge, as the Pirates host the Curtis Warriors.

The underclassmen line up arching their sticks as each senior gets their moment to run through and enjoy the moment they richly deserve. It’s a tradition all schools hold, but this year it’s a little more special. This year the parents get their opportunity to cheer their girls on one more time

The Pirates currently have a 3-1 record, but the season is more about playing the game than the final score or team’s standings. For the girls, it was about getting back on the field and for the seniors, it was about being able to proudly say they played varsity lacrosse as a member of the Tottenville Pirates.

Just for the record, the Pirates defeated the Warriors which added to the special day the team, coaches and families were able to experience.

These girls don’t play for the recognition and stories written about them. Â They dedicated the last three months, six days a week to represent their school with pride and honor.

It’s my pleasure to announce this year roster:

Good luck to the team’s seven seniors as they head off to college. 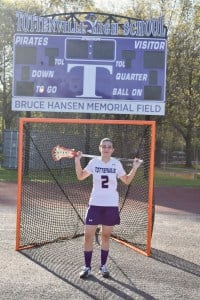 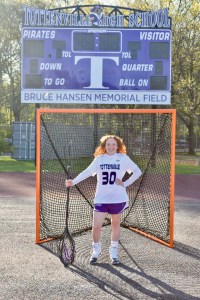 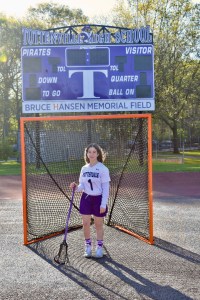 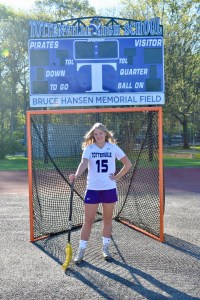 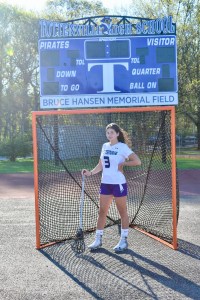 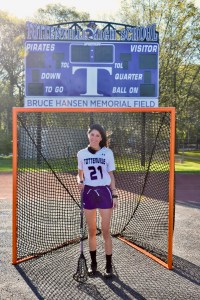 At the end of the day, these 24 girls won the moment they took the field on opening day. The girls continued a storied tradition at Tottenville High School, one that they were determined to see continue for years to come.