Yankees: Ranking the positions that need to be addressed this offseason 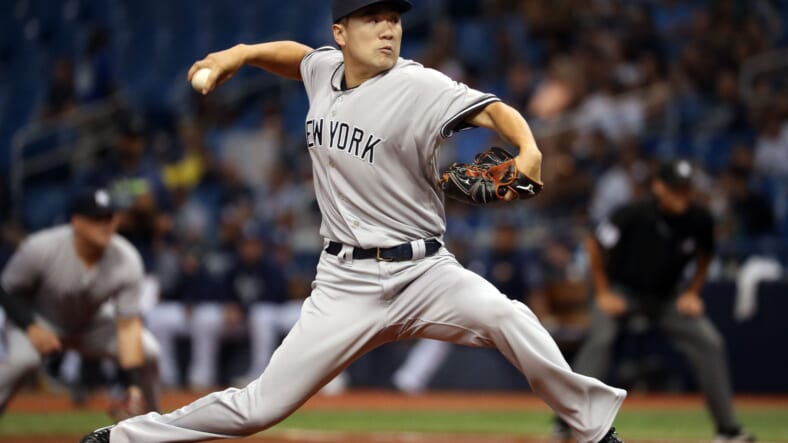 The New York Yankees are in for an interesting off-season after being knocked out of the postseason in the ALCS. With World Series expectations heading into the 2020 season, the Yankees found themselves dealing with injuries and inconsistencies during the campaign.

Just take a look at the Tampa Bay Rays, who have a fraction of the salary the Yankees do, and are currently fighting for a World Series title. There is no question the Yankees need to find solutions at multiple positions, but which ones are they?

Ranking the weakest positions for the New York Yankees:

Starting pitching is going to be a big issue for the Yankees this off-season, as they are set to lose Masahiro Tanaka, James Paxton, and JA Happ.

With three starters coming off the books, it opens up plenty of salary for GM Brian Cashman to go out and sign a few capable players. While Cashman could look to retain Paxton or Tanaka, it is possible they want fresh blood with more reliable health histories.

There are a few elite starters on the market, including Cincinnati Reds star Trevor Bauer. The rumors will be flowing this off-season, but I imagine the Yankees will sign a quality number two to pair with Gerrit Cole. We mustn’t forget about Severino’s return and Domingo German, given the Yanks give him the green light to make a comeback after his justified consequences following a domestic abuse case.

The Yankees relief pitching is one of the bigger mysteries on the team. They have the quality arms to show but simply havenâ€™t been able to remain consistent. For example, Adam Ottavino finished the 2020 season with a 5.89 ERA, allowing 12 runs over 18.1 innings.

I wouldnâ€™t be surprised to see Cashman tried and unload a player like Otto, who struggled this past season but dominated in 2019 with a 1.90 ERA. It seems like other teams have figured out a way to hit him, or lack of confidence played into his poor performance.

Nonetheless, the Yankees will back Tommy Kahnle at the midway point in 2021 (Tommy John), but I imagine they will likely have to sign an additional relief arm to bolster the bullpen.

Leftfield is the big conundrum for the Yankees moving forward, as they have a decision to go with Brett Gardner, their veteran workhorse, or Clint Frazier, their young and developing stud. After a tumultuous 2019 season for Frazier, he has bounced back massively and is a Gold Glove finalist.

I believe the Yankees will stick with Frazier in left field for the future, but since we donâ€™t know for sure, we have to list this position as a potential tossup.

As stated above, the Yankees have a decision to make with Gardner, who has a $10 million option for the 2021 season. He will be 37 years old, and Cashman could elect to buy him out at 2.5 million. Considering his value to the team and consistent health, I believe the Yankees will retain Gardner and insert Frazier as the everyday starter.

Iâ€™m not ruling out the possibility that Cashman wants a cheaper and younger rotational option in the outfield, and considering the Yankeesâ€™ financial struggles this season due to COVID, saving the extra cash could be enticing.