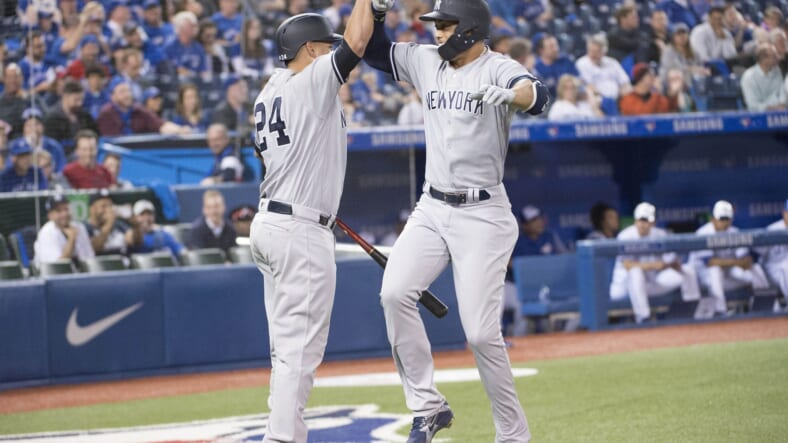 The New York Yankees took on the Tampa Bay Rays again in the Bronx this afternoon for the conclusion of a two-game set. It will be a game that like yesterday, will go down in Yankees history.

Yesterday Didi Gregorius was the star of the show. Today it was the lethal combination of the BIG THREE, Aaron Judge, Giancarlo Stanton and Gary Sanchez who all hit home runs in a game for the first time since Stanton joined the team. And each was a two-run jack.

Stanton’s came in the first inning and according to Statcast, was the hardest hit ball of the young season at 117.9 mph, traveling 458 feet.

Sanchez followed up with in the third inning and his teammate Judge in the fourth.

Get used to this sight. pic.twitter.com/XqCALCMmMT

The Yankees also got a gem from ace Luis Severino who threw 7 1/3, giving up 2 runs on 5 hits with 1 base on balls and 7 strike outs. Severino notched his second victory in as many starts.

Adam Warren and Aroldis Chapman finished the pitching duties to secure the Yankee victory by the score of 7-2 and sweep the Rays in the two game set.

How many more times the BIG THREE combine as they did today remains to be seen. But today could have been the first of many nightmares for opposing pitchers.

Tomorrow evening the Yankees meet another divisional rival, the Baltimore Orioles at home. Remember the early starting time of 6:35 EST.