The New York Yankees should move towards platooning 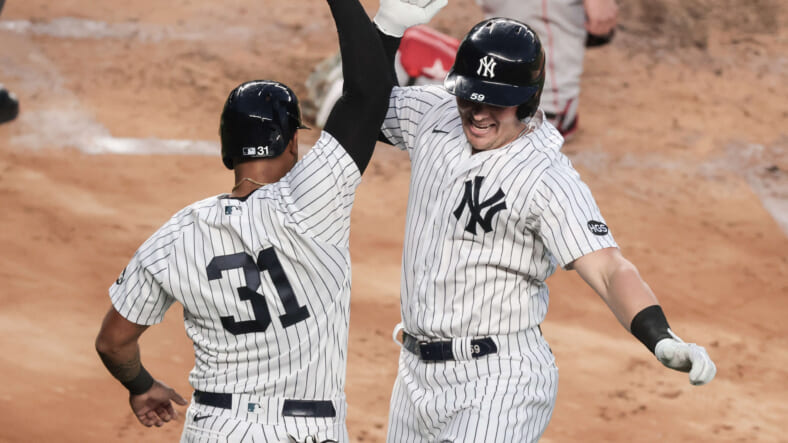 The New York Yankees have an archaic offense, in my opinion. The same 9 games, the same 9 spots, the same 9 positions. Look at the Dodgers, Rays, Nationals in 2019, and the Astros. All of them had platoon-based offenses. Playing to matchups, they were able to put players in their most optimal matchups in order to get the absolute best out of them. The Yankees have an opportunity with some budget buys to secure themselves a system in which they can play to matchups with their lineups. This allows the Yankees to have diverse and unpredictable lineups. If the New York Yankees want a shot to win it all, they’re going to need to look into platooning.

I don’t believe having a lefty just to have a lefty makes any sense, but when it’s so you can platoon to face righties, I’mÂ all for it. The Yankees landing a Tommy LaStella to play the infield as a Utility guy would be splendid with his bat against right-handers. With how free agency looks, he could be landed for cheap as well. I could also see the Yankees looking at Kolten Wong, who’s another lefty, but he’s more for defense. For the outfield, I love Joc Pederson, however, he can struggle defensively. You’ll never win trying the same stuff you’ve tried before, and stagnant lineups have cost the Bombers. How many playoff losses could be chalked up to having a hole you couldn’t replace in the lineup? You can win without platooning, sure, but it’s definitely more difficult.

Mixing Up the Lineup

Explain to me why exactly the Yankees leadoff DJ against righties when Hicks has a better OBP against righties and DJ is a much worse hitter against them? Against lefties, why does DJ not bat 3rd when statistically he’s an insane power hitter against lefties? Why is it that the lineupÂ neverÂ changes? If we face a lefty, we should have the lineup adjusted to have the best possible matchups against a leftyâ€”same thing with righties. If the Yankees want to get the most out of their lineup, they need to start being smarter with their lineups and how they’re constructed.

The New York Yankees Can Get Star Production Through Platooning

Tommy LaStella may not be the best infielder in baseball, but his wRC+ in the last 2 years against RHP is ~140, which is elite level offensive production. DJ LeMahieu vs. Lefties, as previously mentioned, is a hitter who slugs .600 when facing them. When you play guys to their matchups, you have more runs scored and better success, and that usually leads to titles. Obviously, platooning isn’t a perfect science, but if the Yankees want a modernized lineup, they need to mix and match. The only way they’re going to do it is by trying to platoon, something that could be the future of the sport.