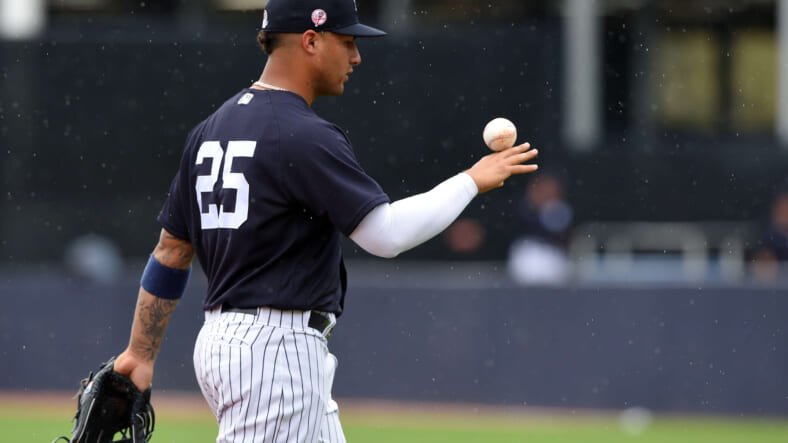 The New York Yankees could make a surprise move and replace Gleyber Torres at shortstop, moving him back to second base where he was more comfortable during the 2019 campaign.

It seems as if he actually took a step backward in 2020, which is extremely problematic considering the Yankees were hoping he would develop into their long-term solution. However, his inability to make routine plays has been an issue and general manager Brian Cashman must look at that position realistically and consider a replacement.

While rumors have bubbled to the surface regarding Cleveland Indians star shortstop Francisco Lindor, it is unlikely the Yankees and Indians strike a deal. Trading for him with just one year of club control left would entail major prospects moving over and the possibility of the Yankees losing him and 2022.

â€œThey are looking at the other guys that are out there,â€ John Heyman of MLB.com said. â€œTheyâ€™ve contacted Andrelton Simmons, thatâ€™s a guy theyâ€™ve liked for a long time. â€¦ Theyâ€™ve tried for Simmons before, they looked at him at the [2020 Trade] Deadline, so thatâ€™s a possibility. And, of course, with Didi Gregorius, whoâ€™s a free agent now. He was their guy and they liked him very much. He did a good job for them and did a good job for Philly, so that’s another consideration.

Simmons would be a quality addition, as he hit .297 with seven homers and 40 runs batted in this past season. Defensively, he earned a .960 fielding percentage with nine double plays and four errors. Heâ€™s a far better fielder than Torres and a more consistent hitter in a larger sample size. Heâ€™s not a slugger, but Simmons is a great contact hitter who has a low strikeout rate (9.0 K%).

“Those are, to me, more likely than Lindor. I wouldn’t be shocked if there’s a lot of discussion of Lindor with the Yankees and a lot of publicity about it, but if the trade actually comes to fruition I’d probably be a little bit surprised.”

Heyman hit it right on the nail, as the Yankees and Lindor trade talks have been in the works for years. The more likely situation is they look to free agency to shore up the shortstop position. However, if they move Torres back to second base, where would DJ LeMahieu fit into the mold? That is the entire issue with this scenario.