Gray had a formidable task ahead of him when he took the mound Friday night---bounce back against one of the hottest offensive teams in the league. 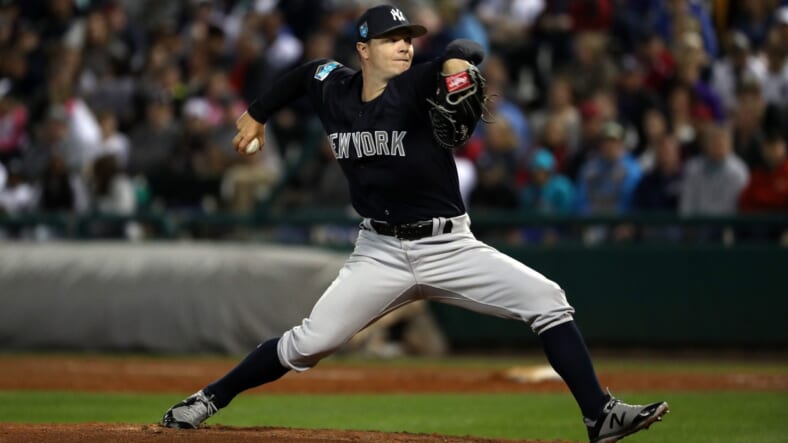 Sonny Gray seemed no closer to figuring out how to regain his All-Star form on Friday night against the Toronto Blue Jays. After announcing this week that he was tweaking his mechanics, his performance against the Blue Jays was underwhelming, and worse, led to an ugly Yankee loss.

First of all, these are the not Blue Jays who were projected by some to finish third in the AL East. This Blue Jay team is outperforming projections to sit in the number two spot behind the first place Boston Red Sox. Gregor Chisholm of MLB.com writes:

â€œThe Blue Jays are scoring more runs per game (6.0) than any team in the American League except for the Red Sox (6.4 entering play Friday night). That has been good enough for a second-place spot in the AL East and early possession of an AL Wild Card spot. On the road, Toronto is 6-3 to start the year and has been outscoring its opponents 47-34.â€

Gray had a formidable task ahead of him when he took the mound Friday night—bounce back against one of the hottest offensive teams in the league.

According to Peter Botte of the New York Daily News, Aaron Boone discussed Grayâ€™s performance after the game and said:

â€œThe fastball velocity was down, even from last time where he struggled in Bostonâ€¦ And it turns into a tough night for him,â€ Aaron Boone said of Gray. â€œWeâ€™ve got to kind of circle the wagons with him and continue to work through it, because heâ€™s really important to us. Weâ€™ve got to bea [sic] part of getting him right and back on track, but this was tough tonight.â€

The Yankee offense was off to a good start with a pair of two run home runs, one by Tyler Austin in the second inning and one by Giancarlo Stanton in the third inning; however, Gray could not hold the lead in either inning and gave up five runs over 3.1 innings. Despite another Yankee home run by Miguel Andujar, the Yankees eventually lost the game 8-5.

Boone acknowledges that Gray has lost his form and with it his effectiveness and Botte points out:

â€œGray finished the game generating only one swing and miss among his 73 pitches. His walk rate of 6.0 per nine innings is nearly double the career-high of 3.2 he posted last season.â€

Gray had seemingly lost command of the strike zone and on those occasions when he found it, he did not fool Blue Jays hitters with his stuff.

When asked after the game what had happened in the four hit three run fourth inning, Gray told Botte that the inning â€œjust kind of got away from me,â€ as if it were a helium balloon he just happened to let go of and not the pounding that it actually was.

Yes, Boone, circle the wagons, and, perhaps, bring the reinforcements, fans agree that Sonny Gray is a problem the Yankees need to solve and quickly.