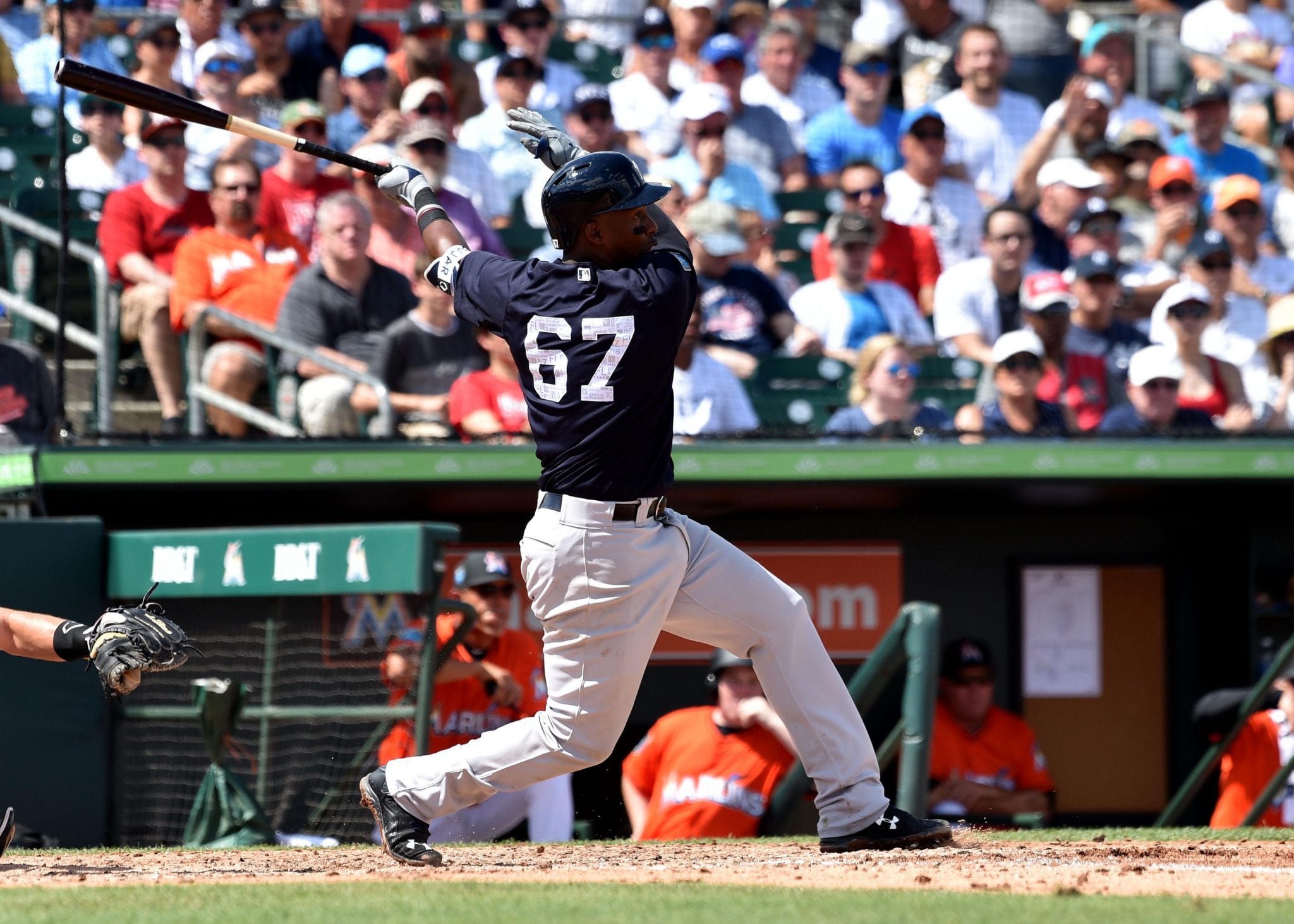 The New York Yankees have a highly valued farm system, and one of the crown jewels of that system is our next player preview Miguel Andújar. Andújar is the number six prospect for the Yankees. The 23 year old is currently billed as the third baseman of the future for the bombers.

The question is however….is the future now?

Miguel made his Major League debut on June 28 against the Chicago White Sox, earning three hits in four at bats with four rbi’s (runs batted in). With only a very small sample size of Major League plate appearances (8) Andújar did have 4 hits 1 BB (base on balls), 1 SB (stolen base), and 2 of his 4 hits were doubles.

Miguel came into Spring Training (2018) with a chance to compete for the opening day starters job at third base. Andújar came out of the gate hot this Spring, driving nearly every ball he hit with authority.

However, since his hot start Andújar has cooled off a bit in the production category  over the last week or so. Yet Miguel is still hitting the ball hard as evidence by his .714 Slugging percentage during Spring Training. But hitting was never the concern with Miguel, as all of the Yankees top brass know he can hit.

Every televised pitch to @MAndujarPapa thus far in spring. Crushes fastballs, not one swing and a miss at a fastball. Such a violent swing too. pic.twitter.com/Vz8DDbLMV8

The question has been his defense. And so far this Spring, Andújar has played extremely well in the field converting all of his 19 chances in the field.

It was thought that Miguel seemingly had an opportunity to secure his position as the Yankees Opening Day third baseman when Todd Frazier signed with the cross town rival New York Mets. But when Brandon Drury was acquired just prior to the start of Spring Training games from the Arizona Diamondbacks, that picture was put in doubt.

As Yankees GM Brian Cashman all but confirmed Drury would be the third baseman. And then factoring in the recent signing of veteran infielder Neil Walker coupled with Andújar’s lack of positional versatility (as he is only a third baseman), Miguel will more than likely begin the season at Scranton.

Offensively, Miguel has nothing left to prove at Triple A but his defense still needs to be improved, though it isn’t as bad as it has been made out to be.

Miguel Andújar will have a chance in 2018 to prove himself at the Major League level, and when he does, just look out; as Andújar may be able to cement himself in as the everyday third baseman for the New York Yankees and potentially make the Yankees upper management and their fans forget about a shortstop down I95.