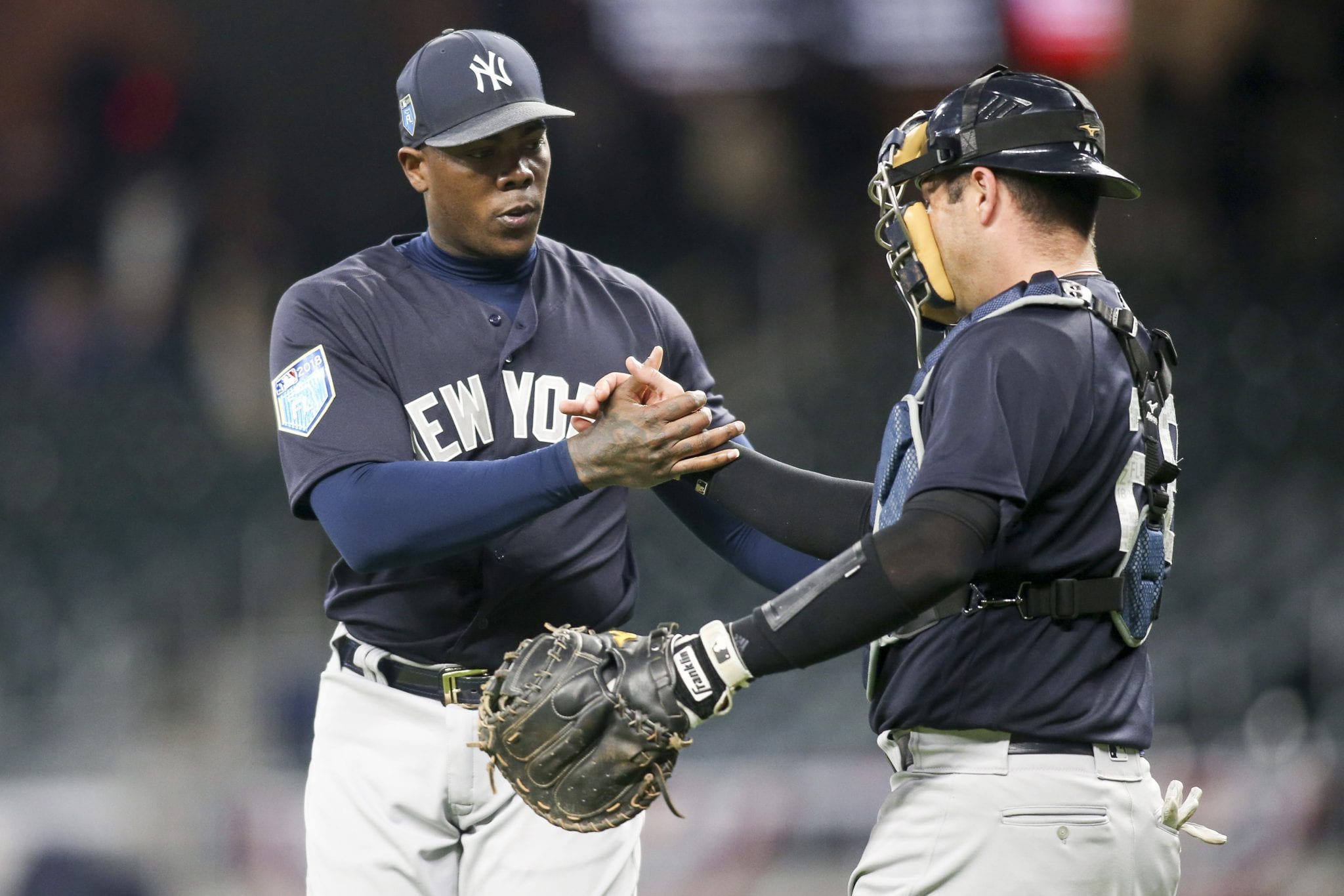 The flame thrower Aroldis Chapman is exciting for New York Yankee fans to watch on a nightly basis. He consistently hits 100 mph or over on his fastball. He does have control problems, but a majority of the reason is mental.

Similar to Betances, the heat seeking pitcher can lose confidence with his accuracy when struggling. Chapman is the Yankees closer and looks to build on the success he had to close out the regular and post season.

Champan was born in the Holguin Province in Cuba. Champan badly wanted to defect from Cuba and play in the majors. When he tried to defect in 2007 he was suspended for the National Season in 2008 and Cuba’s Olympic team.

Fidel Castro allowed him to return to play in 2009 and during the World Port Tournament in Rotterdam, Netherlands, Chapman got into a car on June 1st and successfully defected from Cuba. Cuba was granted residency in Andorra and was made an MLB Free Agent. The Reds signed him in the 2010 off-season to a six year 30.25 million dollar deal.

Chapman spent a majority of the 2010 in Triple A for the Reds, but made his Major League debut on August 31. On September 24, he threw the fastest pitch in MLB up to that point at 105.1 mph against the Padres. Chapman gained some Postseason experience in 2010 as he pitched in two games in the division series.

In 2011 Chapman appeared in 54 games out the bullpen for the Reds. In 2012, the Reds wanted to give Chapman a chance as a starter, but due to injuries to some key relievers Chapman became the set-up man and eventual closer for the Reds. He earned his first All-Star Game appearance in 2012. Chapman became the Reds full-time closer in 2013 and made his second All-Star team.

He had a rough start to his 2014 season as he was struck in the head with a ball in a spring training game and had to undergo surgery. He was activated on May 10 and had a solid season. 2015 was his final season with the Reds and made his third All-Star team. He had 1.63 ERA and recorded 33 saves. The Reds decided to trade Chapman in the off-season. He was originally traded to the Dodgers ,but the deal fell through when Domestic Violence allegations were made against Chapman.

The Yankees decided to make a trade to acquire Chapman because his trade value had diminished from the accusations.

Chapman did not make his Yankees debut until May 9 because of the Domestic Violence case and was suspended 30 games.  Chapman was solid with the Yankees and when they decided to sell off players for prospects, they traded Chapman to the Cubs. Chapman said he loved his time in Pinstripes and would consider resigning in the off-season with the Yankees.

Chapman was the Cubs’ biggest acquisition of the 2016 deadline and helped propel them into the Playoffs. The Cubs went on to win their first World Series in 108 years.

Chapman resigned with the Yankees during the 2017 off-season and was the Yankees biggest off-season signing. Chapman had a rough start to last season and was placed on the DL on May 14 and missed over a month. He was reactivated on June 18 and lost the closers role for a few games. When he was given back the job he pitched much better and helped the Yankees return to the playoffs.

The Yankees hope Chapman can continue his success from the end of last season. If Chapman can be the special pitcher he can be then the Yankees bullpen is truly a monster. Time will tell, but I think Chapman will have an excellent season in the Bronx and earn the save that helps the Yankees win number 28.