New York Yankees Could Be In The Market For Starting Pitcher 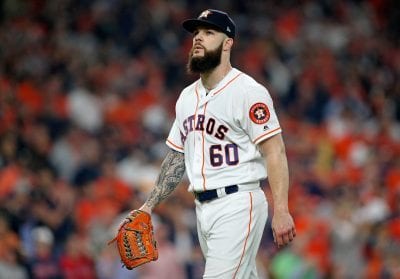 With the free agent market dwindling as the winter months pass, the New York Yankees have certainly made a splash without signing a big-name free agent like Manny Machado or Bryce Harper.

Signing players like DJ LeMahieu and Troy Tulowitzki have added value in terms of veteran leadership and defensive prowess, while the addition of Adam Ottavino provides strikeout efficiency to the bullpen. The Yankees only managed to grab one starting pitcher by trading their most talented prospect in Justus Sheffield for Mariners ace James Paxton.

While Paxton offers solid value despite a history of injuries, the starting pitching unit will likely see a boost in effectiveness in 2019.

The New York Yankees need to keep active in the free agency market:

The Yankees have undoubtedly added value and improved the team this offseason, but there’s more work to be done and adding another pitcher could be a possibility.

Who’s left on the market?

The Houston Astros star pitcher has been an above average pitcher in the MLB, but his cost would likely be too high for the Yankees to bite. He earned a 3.74 ERA in 2018 and has a career ERA of 3.66.

Keucehl’s primary strength is his command, and that’s where he lives and dies as a starting pitcher. His pitchesÂ simply aren’t good enough to make him a dominant option down the stretch, and if his command isn’t consistent he struggles. His strikeout rate is simply discouraging — 6.72 k/9 rate, 0.75 strikeouts per inning.

If you compare him to a pitcher like Luis Severino, who finished last season with a 3.39 ERA and recorded 1.15 strikeouts per-inning, you can see that the optimism and potential for Keuchel have already reached its peak. He would be a costly pickup and wouldn’t be worth the investment for the Yanks.

The former Nationals and Brewers lefty has had a relatively average career. He has a 3.69 career ERA and is 33 years-old. While Gonzalez has plenty of experience, he’s not a No.1 or No.2 pitcher, I see him as a No.3 that can play a rotational role with the Yankees.

His price tag likely wouldn’t be too high and the value he would bring to the club is solid. With the Nationals last season, he recorded a 4.57 ERA. He was traded to the Brewers where he finished the season with a 2.13 ERA and recorded three wins and zero losses.

Last year was the first time he recorded more losses than wins in eight seasons, which could spell trouble. Theoretically, he could slip in behind CC Sabathia and act as a reserve option if the big-guy struggles to finish the season. At 38 years-old, counting on him to be a consistent option and remain healthy is a stretch, so bringing in an affordable alternative like Gonzalez wouldn’t be a bad move.