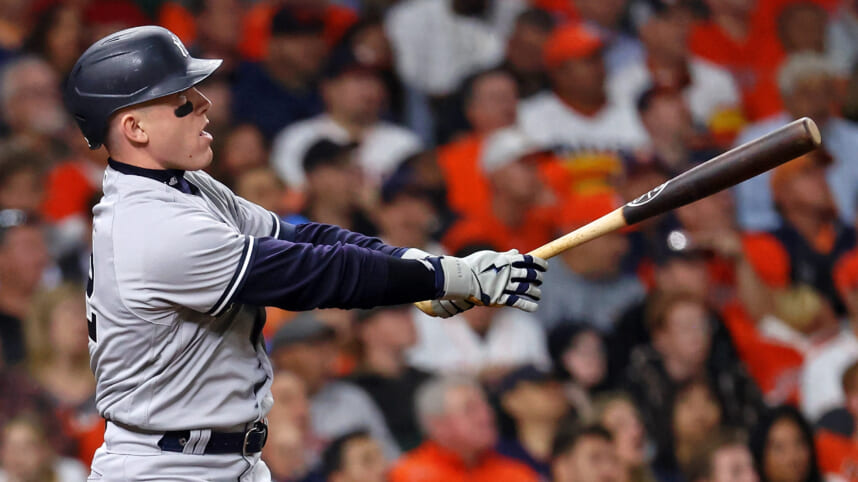 After the 2021 season, now Yankees‘ center fielder Harrison Bader looked like a core piece of an up-and-coming Cardinals team hungry to win the NL Central in 2022. With a career-best 16 HRs and slugging .460 in 103 games, he posted a 110 wRC+ and 3.3 WAR as the premier defensive CF for one of the most storied franchises in sports. He found his power stroke, and it looked like 2022 could be the year he puts everything together and potentially reaches 20 HRs and getting his first All-Star nod.

Instead, he’d find himself with just 5 HRs, his foot in a walking boot, and on the move to the Bronx the very next summer. He’d use the final 14 games he had in the regular season to get himself right, but he’d post just a 47 wRC+ in those games.

Come October, how could the Yankees expect much from Harrison Bader? Was his power in 2021 just a fluke? Is he ever going to reach the heights deemed possible after 2021? Well, in the postseason, he silenced all doubts and showed that there’s another level to Harrison Bader’s game.

Showing Off Improved Power in Postseason:

Harrison Bader mentioned on MLB Network that he felt like he couldn’t get into his back foot to start the season due to his nagging foot injury. It turned out to be plantar fasciitis, and it would sideline him for three months.

Bader mentioned having to be more of a slap hitter and trying to rely on his contact and speed to contribute, something that reflects in the low ISO and sub-40% Pull%. Pulling flyballs is important because they tend to perform better in HR/FB%, and while it doesn’t mean you should only pull flyballs, it does mean that having a pulled flyball profile will lead to more HRs. While most would envision Bader as a light-hitting speedy centerfielder with gold glove defense, Bader has power that needs to be tapped into with pulled flyballs.

Harrison Bader’s playoff spray chart is a thing of beauty, with a lot of pulled-batted balls. This increase in pulled flyballs can stem back to Bader being able to generate more force from his backfoot and drive the ball, allowing him to get out in front and attack the baseball. He averaged a 90.2 EV in the postseason, a huge step up from his 83.4 EV in the 2022 regular season. Some may read this segment and think that this mentality of hitting strikes hard and pulling the ball is how the Yankees ended up getting blanked by the Astros, but it’s quite the contrary.

Hitting the ball hard isn’t some random obsession the Yankees developed as they became more analytical, it’s a concept that’s existed for decades that we can finally quantify. The harder you hit a baseball, the higher your BABIP will be because hard-hit baseballs go for hits more often than soft-hit ones.

In 2022, batted balls categorized as “hard hit” by FanGraphs had a league-wide BABIP of .397, a massive step up from the .290 BABIP on all batted balls in the same season. You have to generate consistently hard contact alongside making a lot of contact in order to sustainably have a high BA, and a high BA tends to correlate to a high OBP. Throw in some slugging in there, and suddenly you’re one of the better hitters in the sport. With his power back in the fold, let’s talk the increased output in stolen bases we saw in 2022.

New Aggression in the Running Game:

Harrison Bader set a career-high for stolen bases in 2022 (17) while only getting caught three times, good for an 85% success rate. His previous high was 15 over 138 games in his rookie season, and he was doing this while fighting plantar fasciitis.

The Yankees were a far more aggressive as a team on the base paths as well, and it proved to be a formula that worked for them when used correctly. Bader ranked in the 93rd Percentile in Sprint Speed, so he’s more than well-equipped to be a premier threat to steal. In 2023 we’re going to see bigger bases, meaning steals are going to shoot through the roof. Harrison Bader is a prime candidate to get that green light more often, and rightfully so. He’s someone who has the baseball IQ and the physical tools to efficiently swipe 30 bases, and with the likes of Oswald Peraza and potentially Anthony Volpe added to the mix in 2023, could we see the Yankees lead the AL in Stolen Bases?

Adding elite baserunning to your arsenal isn’t just an aesthetic appeal, it’s an advantage for your offense that goes beyond just a player’s BsR and WAR value, but also in adding pressure to a pitcher. Pitchers are going to have to work against the pitch clock in 2023, and with the added velocity in today’s game, pitchers work slower than ever.

Teams have figured out how to sustain those “max effort throws,” and with how important velocity is to success, being able to hurry a pitcher up can leave them vulnerable to a mistake. Harrison Bader won’t be leading off due to a less patient approach at the plate, but he could aid the bottom of the lineup a lot. This becomes even more crucial when you consider that Oswald Peraza is most likely going to be hitting a spot or two behind Bader, making it even more important that Bader provides protection for Peraza. Teams are also going to pitch differently with runners on base, throwing fewer fastballs in order to get the strikeout.

This is an approach that teams might have to tweak, as non-fastball pitches are prime pitches to run on due to lower velocity and a higher tendency to get by a catcher or hit the dirt. With Harrison Bader on and expanded bases, could we see teams be a little more fastball-happy when Bader is on in an attempt to cut him down before he can reach scoring position?

This would greatly benefit the bottom of the lineup as if they have hitters like Trevino or Peraza behind Bader, they could see more fastballs than other hitters and do more damage than they would without runners on. This also ties back to the point about some pitchers potentially having fewer max effort throws and thus slightly lowered velocity since they have less time between pitches, and they can’t work too slow to the plate, or else Bader could take off. It creates a conundrum teams are going to have to figure out, and the Yankees will have a strong advantage.

Harrison Bader only has one Gold Glove to his name, but I’d argue he’s the best defensive CF in the entire sport. Despite playing under 700 innings in centerfield, Bader generated 6 OAA in CF, giving him 50 OAA for his career. Since 2018, Harrison Bader leads all CF in OAA (48), and his 55 total OAA since 2018 is the 4th best mark in that timespan. His range is simply unrivaled out there, and he has a ridiculous arm to pair with it. His Arm Strength ranks in the 91st Percentile, averaging 91.5 MPH on his throws and topping out at 96.8 MPH.

Harrison Bader is the type of defender that can make up for the deficiencies of other outfielders in the corner spots, and if the Yankees retain Judge, they’ll have one of the best outfield duos defensively in the sport. We don’t exactly know who’s going to be in LF, but they’ll love playing next to someone with the athleticism and pedigree of Harrison Bader.

Having this much defensive value gives Bader a high floor in terms of his WAR value, especially at a premier position like CF. Despite the fact that Bader had a putrid 86 wRC+, he was still on pace for ~2.9 WAR/600, according to FanGraphs, which speaks volumes as to how good he is defensively. If he’s able to generate league-average offense with his baserunning, he’ll be a shoo-in to generate 4 WAR in 2023 with enough playing time.

Setting Expectations for Harrison Bader in 2023

Steamer has released their projections for the 2023 season, so let’s see what they think Bader will provide in 2023:

The offensive numbers in terms of HRs and wRC+ seem to be right where I would expect Bader to be at in 2023, though I have belief he can provide more in the BA and OBP departments. Harrison Bader’s baserunning and defensive value seem a bit low, considering a 1.3 BsR would be his worst 162-Game season mark since 2019, but his defensive value is right in line with what his 2022 value would have been over 130 games.

Double-digit defensive value and roughly 3 BsR would be the ideal outcomes, and they could be the factors that get Bader to that 4 WAR threshold. He did have to battle that foot injury in the outfield in St. Louis to start the year, so perhaps being fully healthy will provide Bader the defensive boost from really good to all-time great again.

I couldn’t be more excited to watch Harrison Bader in 2023 because if he taps into his ridiculous athleticism and strong power, we could see Bader make his first All-Star team. Bader was made for the Bronx; and 2023 is the year for him to put his name on the map and become not just a fan-favorite but cement himself as one of the best at his position.