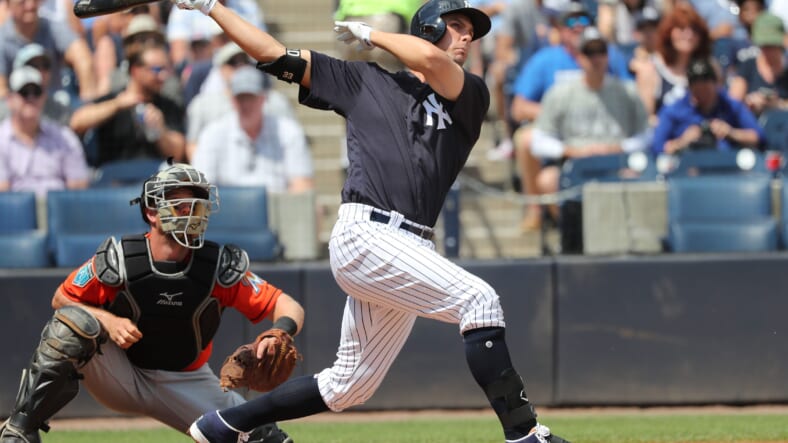 New York Yankees first baseman Greg Bird could return soon, but he might have to face a position battle with Tyler Austin. Yankees manager Aaron Boone recently confirmed that while Friday is a bit too early of an estimate, Bird might make his return over the weekend.

The 25-year-old underwent ankle surgery on March 27, giving him a recovery timetable of six to eight weeks. Since then, he’s played games at the A+, AA, and AAA levels during a rehab assignment. He’ll have competition after returning to the Yankees, however, because of the rise of Tyler Austin. Austin has performed well in Bird’s absence and is even hitting .293 against left-handed pitchers.

Bird, on the other hand, hasn’t found the same success in the minor leagues during his rehab assignment. He batted .133 and .167 for the Yankees AA and AAA teams, and those numbers are a bit distant from the ones that Austin is putting up in the big leagues.

“We will see how it plays out, and matchups and stuff,” Boone said, before the second game of the series with the Rangers. “Tyler has put himself in a very good position and has had a big hand in us winning games.”

With two viable options at first base, the Yankees will have a real position battle on hand. It looks like Bird is the better overall player, but Austin is on a hot streak and has been great against lefties this season. The battle may be decided by which pitchers are starting for opposing teams in the next few series, and it will be interesting to see how it plays out if Bird does make his return on the weekend against the Los Angeles Angels.