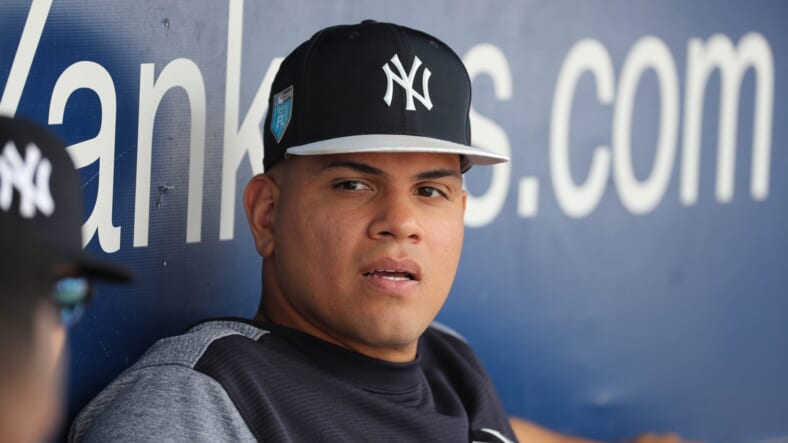 The New York Yankees played a hard fought game today. CC Sabathia in his first start had some command issues ,but put together a solid start for the Yankees. He kept them in the game and would not give in to the Blue Jays. Tyler Austin supplied all of the Yankees runs today. This is the first loss of the season for the Yankees, but the Yankees proved they will be in every game. The main problem for the Yankees was Dellin Betances who had alot of control issues and looked similar to himself from last season.

Before the Yankees scored any runs today they got a scare when rookie Billy McKinney crashed into the left field video board and had to be taken out of the game.

Billy McKinney is shaken up after a nasty collision with the left field wall. pic.twitter.com/6lOLL7V3wh

The offense today was basically Tyler Austin. In the fifth inning with the Yankees trailing by two runs Austin smacked a game tying homer off of Blue Jay starter Marco Estrada.

OHHHHHH BABY!@T1721Austin sends one to the MOON to tie the game! ?

The Yankees third and final run came on Austin’s second homer of the game which was a game tying one in the seventh.

SECOND dinger of the game.@Yankees tie it back up at 3-3.

CC Sabathia looked pretty good in his first start of the 2018 season. He did surrender and early lead to the Blue Jays when Justin Smoak hit a single that scored Josh Donaldson in the first. Besides the first inning run CC pitched a decent game for the Yankees.

Adam Warren came on in relief of CC in the sixth for his first appearance of the season. After retiring the first batter he faced and walking the next Warren got the second out ,but was injured on the play. Jays shortstop Aledmys Diaz hit a sharp liner off of Warrens right foot. Warren existed the game and was replaced by Jonathan Holder.

Holder served up a a two out single to catcher Luke Maile. Dellin Betances then entered the game in the seventh and pitched a dominate inning. Betances was helped out by catcher Gary Sanchez on the second out of the inning. Sanchez fired a laser to Didi Gregorious at second to catch Curtis Granderson trying to steal second.

The trouble for Betances came in the eighth inning. The first batter of the inning Yangervis Solarte blasted a solo go ahead homer off of Betances. He then recorded two outs and a single to Kevin Pillar. Pillar then stole second with Luke Maile batting. Maile was then walked by Betances. With Gift Ngeope batting Pillar stole third and Maile stole second. Then Pillar stole home for the Jays fifth a final run while Maile advanced to third. Betances got Ngeope to strike out ,but the damage was done and the Yankees went down 1,2,3 in the top of the ninth.

Todays player of the game is Justin Smoak. He had a dominate day at the plate and recorded his first two RBI’s of the season.