New York Knicks rookie Immanuel Quickley received a special gift on his 22nd birthday as the NBA announced on Thursday his inclusion in the All-Rookie selection.

Quickley headlined the NBA All-Rookie Second Team after a stellar play off the bench for the Knicks this season. The 25th overall pick came six points shy of making it to the All-Rookie First Team.

As expected, Charlotte’s LaMelo Ball, who was named the NBA Rookie of the Year, and Minnesota’s Anthony Edwards were unanimously selected to the First Team. Joining them are Sacramento’s Tyrese Haliburton, Detroit’s Saddiq Bey, and Houston’s Jae’Sean Tate, who went undrafted in 2018 and played in Australia’s NBL with the Sydney Kings.

Meanwhile, the Knicks’ eighth overall pick Obi Toppin, who entered the season as one of the favorites to win Rookie of the Year, did not receive any vote.

Toppin had a rough start to his NBA career playing sparingly behind the league’s Most Improved Player Julius Randle at the four-spot. But the Brooklyn native finished his rookie year strong with a solid play off the bench in the playoffs.

Below are the voting results for both the NBA All-Rookie teams. 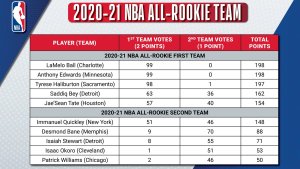