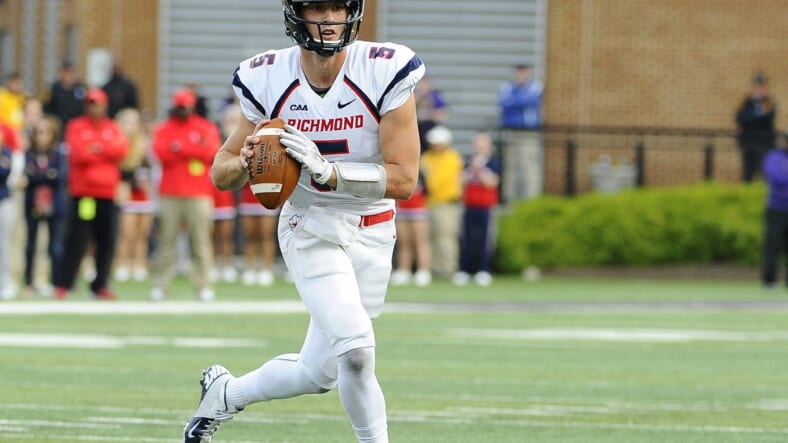 In the fourth round of the NFL Draft, the New York Giants selected Kyle Lauletta. Who is this FCS quarterback, and what did the Giants see in him to make him worthy of their fourth round pick?

Here’s a quick recap of his career and his skills:

Lauletta played his college football in the state of Virginia, but it wasn’t with the Cavaliers or the Hokies. He played for the lesser known Richmond Spiders, an FCS school that is a part of the Colonial Athletic Association. Playing outside of the FBS makes Lauletta a harder sell as a prospect, but the redshirt senior still had quite the season in 2017 and gained the attention of NFL scouts.

Last year, he was the CAA Offensive Player of the Year, made the First Team All-CAA, and finished with 31 touchdowns. He was also a Third Team All-American according to STATS FCS, and his 3,737 passing yards put him in the top five nationally in FCS. All of these accomplishments, however, mean nothing if Lauletta doesn’t look good to NFL scouts in his game film.

If you look at some of Lauletta’s highlights, you might be reminded of number one overall pick Baker Mayfield. Lauletta is taller, but didn’t always have help from his offensive line at Richmond. He’s good at sensing pressure and moving out of the way, and his short to mid range accuracy doesn’t take a hit when he’s on the move. There’s complaints about his arm strength and by extension his deep accuracy,Â  but his medium accuracy looks strong enough to compensate, at least for now.

Let’s be clear. Kyle Lauletta is not Eli Manning, and while he’ll learn under Manning, they aren’t the same kind of player at all. But Lauletta’s own style offers plenty of excitement and if he ever gets playing time, it shouldn’t take him long to excite Giants fans by keeping plays alive and throwing on the run, or simply avoiding a loss of yards. His offensive line looked horrendously bad at times during the William and Mary game last year, and if the Giants can offer him more protection, Lauletta should have an easier time living up to his potential.

With a better offensive line in the Senior Bowl, Lauletta showed more accuracy and did it against players from FBS schools. Still, he hasn’t played in a pro style offense and Pat Shurmur might have his work cut out for him with helping Lauletta adapt his game to the NFL. He’s never played in a pro style offense and the reads required for the NFL will be different from the ones that he made at Richmond.

The throws will be different too, although the film indicates that concerns about his arm strength may be overstated. He won’t throw deep all the time, but if a receiver is open down field he has enough arm strength to make a play and deliver a catchable ball.

In short, Lauletta is a project quarterback that has good movement inside and outside of the pocket, along with NFL accuracy from short to mid range. However, he comes from a very different offense and his current play style makes him too much of a runner for the NFL. He’ll have to adapt, and Giants head coach Pat Shurmur might be the right person to help him with that.