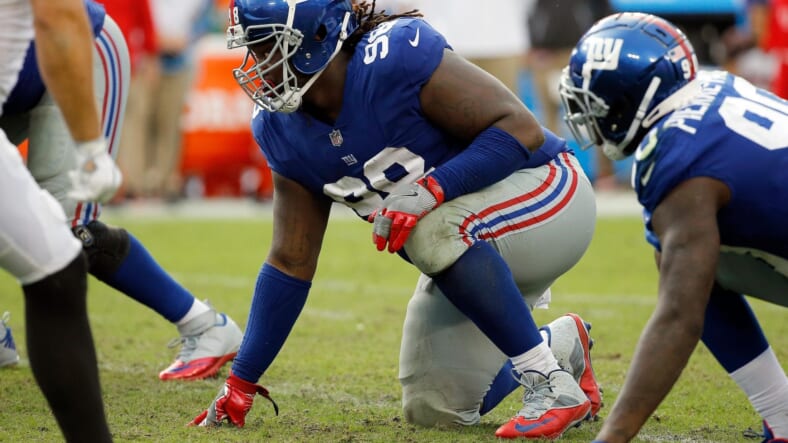 It’s easy to forget it after last season, but the New York Giants have one of the best nose tackles in the NFL. Damon “Snacks” Harrison didn’t get compared to other top players as much, mainly because the rest of the team wasn’t competitive like it was in 2016, but he was still great against the run and even led the league in the run stop metric from Pro Football Focus.

Despite the 40 run stops, he was actually down from the two years before, which shows his potential to perform at an even better level than he did last season. When it comes to the run stopping game, it wouldn’t be a crazy prediction to say that Harrison leads the league again. But is that what Giants fans should expect from him? Harrison didn’t have a large drop off from the 2016 season, at least if you only consider the main stats.

His best year was 2016, when he had 55 tackles and 31 assists. Last season, he only had four less tackles, but also had 25 assisted tackles compared to 31. He did play one less game in 2017, so that might explain the drop from his best season. When you consider what his numbers might look like for this season, however, it’s important to consider the scheme fit under James Bettcher.

The Giants are building a 3-4 defense, which can either be a good thing or bad thing. Harrison has experience in that system with the Jets, but his best performances came after his move to the Giants. It’s hard to tell whether a change to 3-4 is a good or bad thing for him, as an individual. On one hand, he made a big jump after moving from the 3-4. On the other hand, that could be a result of him making a jump as a player after having more time in the league.

Harrison does have more help this year, though. The Giants strengthened their front seven in the draft with Lorenzo Carter and B.J. Hill, and depending on how those players pan out, opponents may focus on him less. The team as a whole should also have better coaching this year, as things spiraled out of control early last season and this likely had an effect on the on-field play-calling for both the offense and defense.

At 29, Harrison isn’t quite at the age to drop off either. It would be surprising if he matched his best season, but an improvement from 2017 would be fairly reasonable, if you base a prediction off of the last three years. Harrison will be the main run stopping player on the Giants line, and as such, he should take a step forward with other members of the defense.

Prediction: Harrison’s 40 run stops from this year jumps to 45. His tackles don’t move too significantly, but his assists move up to 31 or more to match his number from 2016.