What Saquon Barkley Means For The New York Giants 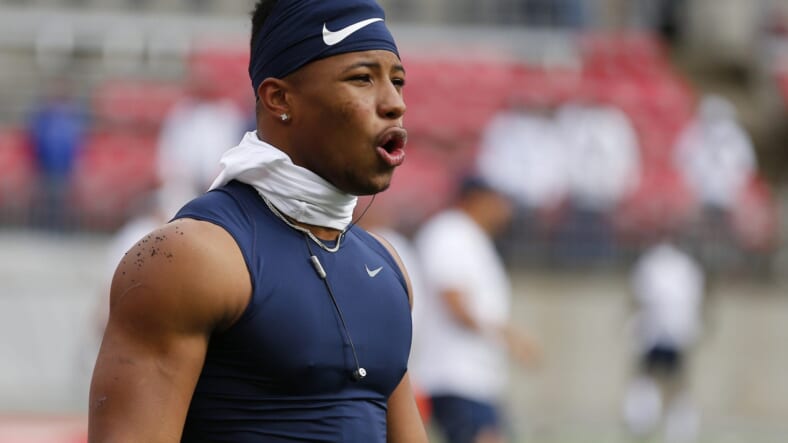 With the New York Giants adding Penn State running back Saquon Barkley to their backfield, they’re not only adding a talented player, but a potential franchise changing talent.

Barkley has all of the tools — Running, catching, blocking… You name it. He’s as dynamic as they come, and to be quite frank, he could be one of the best running backs to ever enter the NFL.

What does grabbing Barkley mean for the Giants?

So, the decision to grab Barkley with the No. 2 overall pick was full of speculation and comparisons to Sam Darnold being selected one pick later. But, the pick does confirm one point: The Giants are absolutely playing to win ‘now’.

For a team that was expected to enter a rebuilding process, they seem to be far ahead of their expected landing spot. Barkley brings a dimension to the Giants’ offense that has been a void spot for decades. He is a threat to take it to the house at any give moment, and analyst Bucky Brooks expressed that in his prediction for the Giants in 2018.

“It’s uncommon for a team to beÂ oneÂ player away from title contention and it’s even more of a rare occurrence to find that player in the NFL draft,” Brooks wrote,Â via NFL.com.Â However, that is the situation theÂ New York GiantsÂ find themselves in on the heels of the 2018 draft. After the selection of Penn State RBÂ Saquon BarkleyÂ with the No. 2 overall pick, theÂ GiantsÂ are poised to make a run in the NFC.”

The addition of UTEP offensive lineman Will Hernandez only benefits and adds to the potential success for the Giants on offense. Hernandez is a big, mean, destructive player. His use of sheer force is unparalleled coming out of college, and should be a plug and play type of player.

Barkley’s most underrated attribute is his ability to open up opportunities for his fellow teammates — this is where Odell Beckham Jr. comes into play. The Giants’ star receiver will arguably benefit the most from Barkley’s contribution to the team, as defenses will have to honor the running game and allow Beckham Jr. to exploit 1-on-1 coverage.

The bottom line, Barkley instantaneously makes the Giants a playoff contending team, whereas only a few months ago the organization was hanging over a steep cliff. Luckily, new GM Dave Gettleman was able to drag the franchise out of a potential dark-age.