Pat Shurmur Breaks Down The Decision To Draft Kyle Lauletta 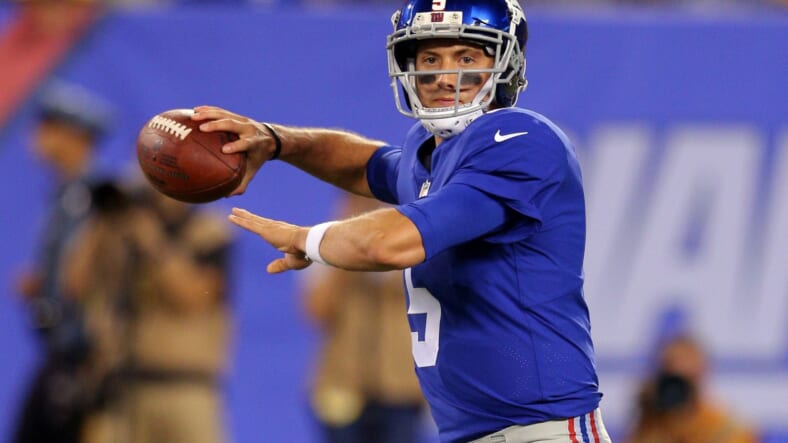 The New York Giants took a flier on Richmond quarterback Kyle Lauletta with the 108th pick in the 2018 NFL draft.

The signal caller out of Richmond was projected as a possible round-two pick, but he slipped to the fourth-round where GM Dave Gettleman and HC Pat Shurmur decided to pluck him off the board.

Lauletta finished his collegiate career with a 3,737 yard 2017 campaign, racking up 28 touchdown passes and 12 interceptions. The young QB acquires solid footwork and deadly accuracy in the mid-range passing game. His weakness, however, might not be reversible. Lauletta struggles with a lack of arm strength, which might hinder his ability to make tough throws between windows. Despite his lack of ball velocity, Lauletta has drawn comparisons to Jimmy Garappolo and Carson Wentz, two of the NFL’s best quarterbacks.

Pat shurmur was confident in the decision to grab Lauletta, despite obvious concern at the cornerback and offensive line positions.

“I think itâ€™s good to have three quarterbacks,” Shurmur said to reporters,Â via Big Blue Interactive. “I think this league and our game is about good quarterback play and I think itâ€™s about the development of the quarterbacks. So the longer theyâ€™re around you, the longer they can develop in your system. We wanted to go to camp with three and weâ€™ll probably add another one â€“ four quarterbacks â€” and go through camp that way and then just see where it goes. For a very long time, I was on teams where we would just keep three quarterbacks active. Another model is to have two and one on the practice squad, so weâ€™ll see where it goes.Â Picking Kyle has less to doÂ aboutÂ Eli and Davis and more to do about Kyle.

“We liked the player and we wanted to add him to our team and then just let them compete. The one good thing about quarterbacks is Iâ€™ve watched it with my son, theyâ€™re always drafting, or in the case of college, theyâ€™re always recruiting the guy to replace you, so theyâ€™re used to competition. I donâ€™t think youâ€™re going to be a very good quarterback if you donâ€™t look forward to it, so there is competition in the room â€“ Kyle is going to be smart enough to learn everything he can from Eli and Davis and theyâ€™ll all try to be as good as they can be and then whoever becomes the starter, the other two guys can help him during the week, so that they can perform at a high level. So thatâ€™s a long answer to your question.”

Giving Webb something to be concerned about at night isn’t ideal in terms of replacing Eli Manning as his potential heir, but it in the grand scheme of things, it will help him develop as a quarterback. Giving him a sense of urgency and the ‘want’ to prove himself will ultimately make him a better player, and hopefully give him the motivation to take his game to the next level.

“I think there are people that say he (Lauletta) doesnâ€™t have enough arm strength,” Shurmur said. “I disagree. I think heâ€™s got all the traits, all the things youâ€™re looking for in a quarterback â€“ heâ€™s tall enough, heâ€™s got good mobility and really arm strength is about fourth on the list. You have to be a good decision-maker, you have to have a sense of timing and you have to throw an accurate ball, which he does. He does all those three things well and he uses his feet to get the ball where he needs to get it and thatâ€™s really what I was impressed by â€“ heâ€™s got a good set of legs, heâ€™s tall enough, heâ€™s a winner, heâ€™s got moxie, heâ€™s very competitive and so weâ€™re glad to add him to the group and heâ€™s one of those guys thatâ€™s going to come in and compete and be as good as he can be. If at some point he is not the starter, then he is going to do what he can to help the starter be good and thatâ€™s what Iâ€™m talking about when I say we want a great quarterback room. Iâ€™m really thrilled that we could bring him in and try to develop him and see how good he can be.”