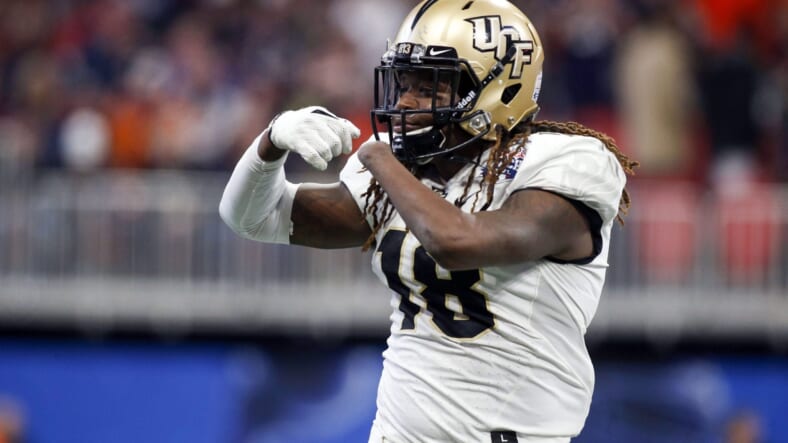 The New York Giants currently hold the No. 66 and No. 69 overall picks in this years draft. The first round was nothing short of exciting, and now the anticipation is building for Day 2 of the NFL Draft.

With these third round picks, the Giants should look for impact players that can help improve the team immediately.

Here is a look who the Giants should target with the Round 3 picks.

Dave Gettleman has said over and over that he wants players that love to play football. If Shaquem Griffin does not love the game of football, then I am not sure who does. By now, most people are aware that Griffin lost his left hand due to a rare prenatal condition.

Some may see his condition as a huge disadvantage, but Griffin has proved all of those doubters wrong. The 2018 Peach Bowl Defensive MVP, shocked everybody in the combine with his speed, athleticism, and the ability to catch the ball. He could help improve the linebacker group immediately, while still learning from some of the current veterans.

This is where the Giants could attempt to replace Jason Pierre-Paul. Josh Sweat has the physical tools to fit in as a 3-4 linebacker and the raw talent to develop into a quality edge rusher.

Sweat has had some injuries in college, but when fully healthy he has flashed great athletic ability. He is a very coachable player that could fit in perfectly with James Bettcher’s group.

Drafting Davis would fill a huge need in the secondary for the Giants. He is a big-bodied cornerback with long arms and the raw talent to disrupt passing offsenses. With the proper coaching, he could become a starting corner for an NFL team very quickly.

Carlton Davis would be an immediate upgrade to the Giants secondary, by adding depth and more young talent. He has the luxury of not needing to start right away, though it would not surprise me to see him on the field Week 1.

Another defensive back that would be a solid third round option for the Giants, would provide physicality and versatility that the New York Giants could really benefit from. He is a well-built corner that plays physically in pass defense and run support.

He has the ability to play in multiple positions. He was a full-time starter and cornerback for North Carolina but could transition to a Nickel corner in the NFL and possibly safety as well. He also has the luxury of not needing to start right away, but I am more than confident that James Bettcher would find a key role for Stewart in Big Blue’s defense.