Here’s What The Giants Are Getting In Linebacker Lorenzo Carter 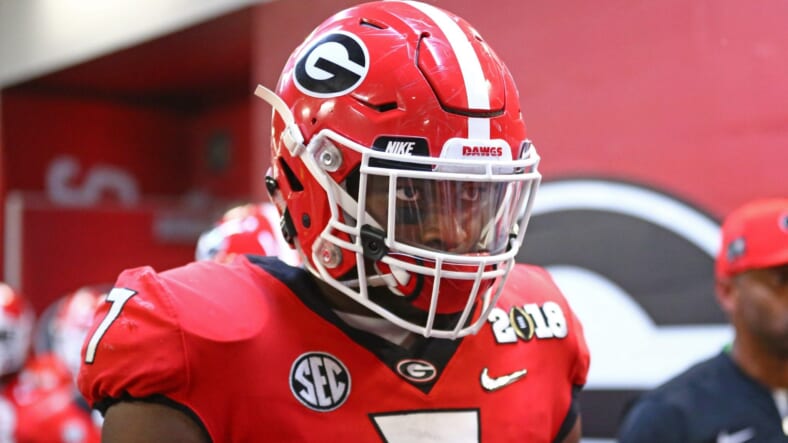 Carter was a dynamic and versatile linebacker while at Georgia. He impressed at the NFL combine with a superb 40-yard dash.

The Giants have neglected the linebacker position for years under former GM Jerry Reese. The middle of the defense was seldom filled with quality, and was often a liability in run support and pass coverage.

The team boasted the likes of Jonathan Casillas and the ever injured Keenan Robinson and B.J. Goodson last year. The Giants’ run defense ranked 26th in the league in 2017, despite having Jason Pierre-Paul, Olivier Vernon, Damon Harrison, and Dalvin Tomlinson on the defensive line.

Adding a physical player like Carter to the mix only benefits the defensive front, in addition to the trade that brought Alec Ogletree to New York.

Giants select LB Lorenzo Carter with the No. 66 pick pic.twitter.com/Im6McrLQb0

What tangible skills does Carter bring to the Giants?

The Georgia product is very comfrotable rushing the passer, dropping back in coverage, and/or stopping the run. His multi-dimensional skill-set is exactly what the Giants were looking for in the draft. He combines length with fluid athleticism on the field.

His timing off the line of scrimmage is superb, and his flexibility around the edge gives him the advantage of being a pass-rusher as well. Being able to drop back in coverage benefits a defense that has a plethora of run-stopping linebackers. Having the ability to cover a tight end if need be will help provide support across the middle of the field.

Carter was a five-star highschool prospect going into college, but he never made the transition to the college level and failed to deliver the impact expected of him. Hopefully, he can reach his potential with the help of NFL mentors and coaching.