Giants Can Rejuvenate Offense With Second Round Pick 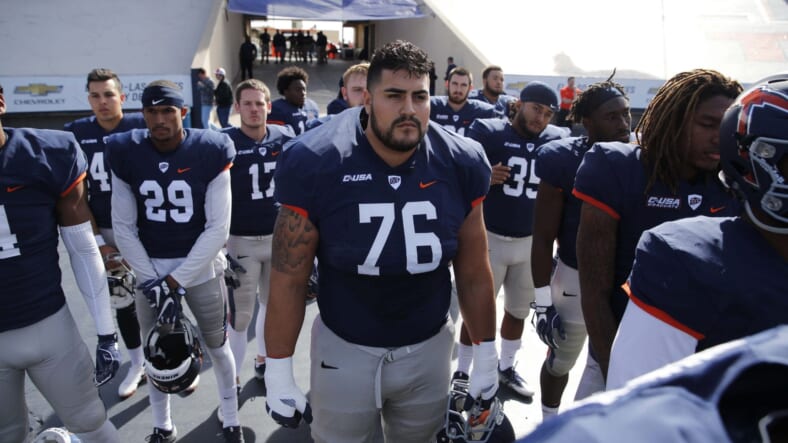 The New York Giants hold the No. 34 overall pick heading into day two of the 2018 NFL draft. On Thursday, Big Blue spent their highly coveted pick on Penn State running back Saquon Barkley.

The stud runner will headline an offense that consists of Eli Manning, Odell Beckham Jr., Sterling Shepard, Evan Engram, and a rebuilt offensive line. Well, the offensive line is in the ‘process’ of being rebuilt, which is where the No. 34 pick comes into play.

With lineman like Billy Price, Kolton Miller and Isaiah Wynn off the board, the Giants will have to look elsewhere for support. Several names that jump off the board are UTEP standout Will Hernandez, who was mocked to be a first-round selection, and Texas tackle Connor Williams.

Hernandez comes from a smaller school that failed to secure even a single win in 2017; NFL teams may have had a lower grade on the big gaurd than anticipated. Nonetheless, Hernandez is a mean, strong, “hog mollie,” which is exactly what GM Dave Gettleman looks for in his lineman.

If Hernandez escapes the first pick of the second-round which is held by the Cleveland Browns, New York will be in a prime position to grab him.

Another stellar option is Boston College’s Harold Landry, who has the capabilities to develop into an elite pass-rusher. His availability could be too enticing for the Giants to pass up, especially after trading Jason Pierre-Paul to the Tampa Bay Buccaneers.

The question will be: Do the Giants secure a prime pass rusher instead of taking a risk on a small school offensive lineman?

Personally, I believe that the offensive line is a priority given the fact that Barkley was the Giants’ first-round selection. If they’re going all in on the running game and offense, they should likely spend the pick on a lineman to bolster Eli Manning’s protection and open up running lanes for Barkley.