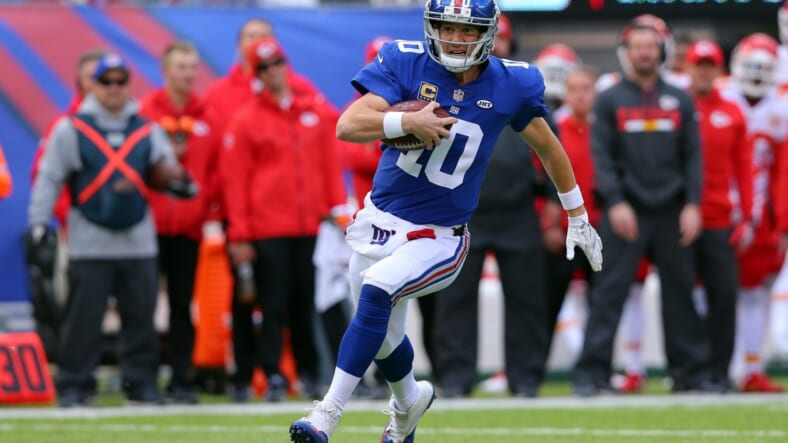 I remember one fine day on a radio show New York Giants’ QB Eli Manning was asked if he felt that he was an elite QB, like Tom Brady.

Eli responded, “yes, I feel like I am a elite QB”. Eli has had his fair shares of ups and downs, but one thing is always for certain, he is a Hall of Fame QB. When he was drafted in 2004, he didn’t want to be a San Diego Charger, so he requested a trade to the New York Giants on his draft day.

Eli has been the true definition of a New York Giant. He has never missed a game due to injury and has the 2nd longest streak of consecutive starts in NFL history.

Many of his critics say after this past 3-13 season that he is declining. But with Dave Gettleman taking over and making the offensive line a priority, I believe we will once again see Eli bounce back.

Manning has wonÂ  two Super Bowls and earned MVP both times. He is the only QB to be undefeated against Tom Brady in a Super Bowl.

It wasn’t that long ago in 2015 Eli Manning had a great year. He threw for 4,436 yards and 35 TD’S. The Giants drafted his potential replacement last year in the 3rd round in Davis Webb out of Cal. In the 2018 NFL Draft the New York Giants hold the 2nd pick, and what they do with it will decide the future of the organization.

Despite Manning’s physical skills diminishing with every passing year, he is still ‘OUR’ quarterback, and we mustn’t forget that he deserves our faith and support until his final day as a Giant. We must remain hopeful that he can lead our team in 2018, and that when it comes down to it, he will be there when we need him most.

From the two glorious Super Bowl runs, to the monstrous hits he’s taken over the years, Manning has never faltered and has always risen up from the dirt to find his receiver on the very next pass.