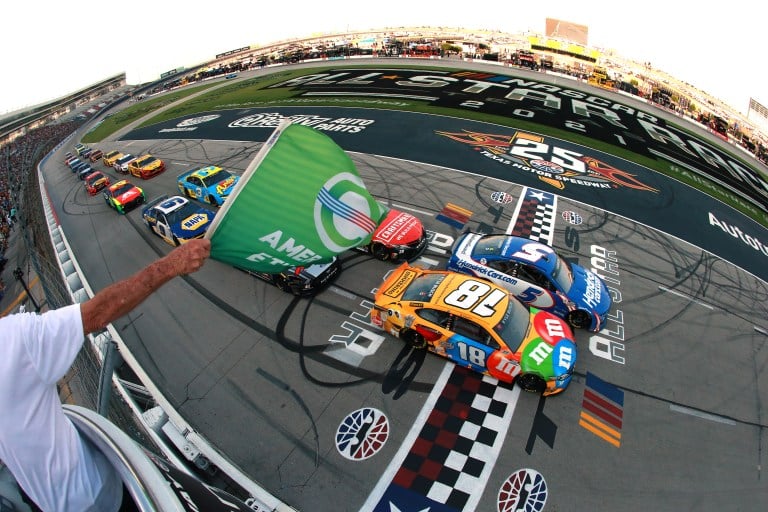 The NASCAR Cup Series’ All-Star break was no sanctuary for the continued domination of Kyle Larson and Hendrick Motorsports.

HMS’ No. 5 Chevrolet continued its take over of the premier racing circuit, taking home the million-dollar prize at the annual NASCAR All-Star Race, which was held at Texas Motor Speedway for the first time. Rather than points, Larson’s team takes home the seven-digit money prize traditionally bestowed to the winner. He would hold off a hard-charging Brad Keselowski over a ten-lap shootout to secure the victory, with HMS teammate Chase Elliott rounding out the top three. Larson is now one of eight drivers to win multiple All-Star Races, winning the last one he participated in (2019) as well. Each of the other seven drivers who have done so is a Cup champion, with another HMS legend, Jimmie Johnson, pacing the way with four.

“I think I felt him try to maybe take the air off my rear end to (turn) one once I got a little bit light getting into (the turn),” Larson said of his battle with Keselowski. “I could tell he was going to have to get desperate to do something and get a run on me, but thankfully our car was fast enough, he just couldn’t get those extra few feet.”

“Chase Elliott to me, is the most aggressive and best restarter, or one of the best restarters, especially from the front row, so that was, that was really cool (to beat him,” Larson added of the opening to the final decalogue before cheekily adding “To win a lot of money is awesome too.”

Larson has headlined a resurgence for the legendary HMS team, which has won each of the last four points races en route to passing Richard Petty’s Petty Enterprises for the most all-time. The No. 5 has triumphed in the last two and now takes home HMS’ record 10th victory in the All-Star exhibition. Elliott, the defending series champion, took home last year’s event at Bristol.

A unique format was used for the maiden voyage in Fort Worth, as the 100-lap event was broken down into six stages. Each of the first four segments lasted 15 laps apiece and the latter three featured inversions that shifted the field and created more opportunities for passing. The penultimate stage lasted 30 laps, with each participant required to make a green-flag pit stop prior to the 20th circuit. Elliott’s No. 9 crew earned the fastest stop, netting a $100,000 bonus. Starting position for the fifth round was determined via an accumulation of results over the first four segments.

“I actually kind of enjoyed it,” Larson said of the format. “I don’t know if this is a format that will work at every track, but I feel like for Texas it worked. I think the mandatory green-flag stop at the end was kind of cool.”

As the final stage loomed, it appeared that the exhibition would once again come down to an HMS civil war between Larson and Elliott. But Keselowski, the last driver to make his mandatory stop, held on to the lead when a caution flag (accounting for the spinning car of Ross Chastain) flew shortly after his service, his No. 2 Team Penske Ford serving as an invader to the monopoly. Though Elliott faded late, Larson held to secure the victory.

The NASCAR Cup Series resumes its season on Sunday afternoon, as the circuit will debut at Nashville Superspeedway for the Ally 400 (3:30 p.m. ET, NBCSN).