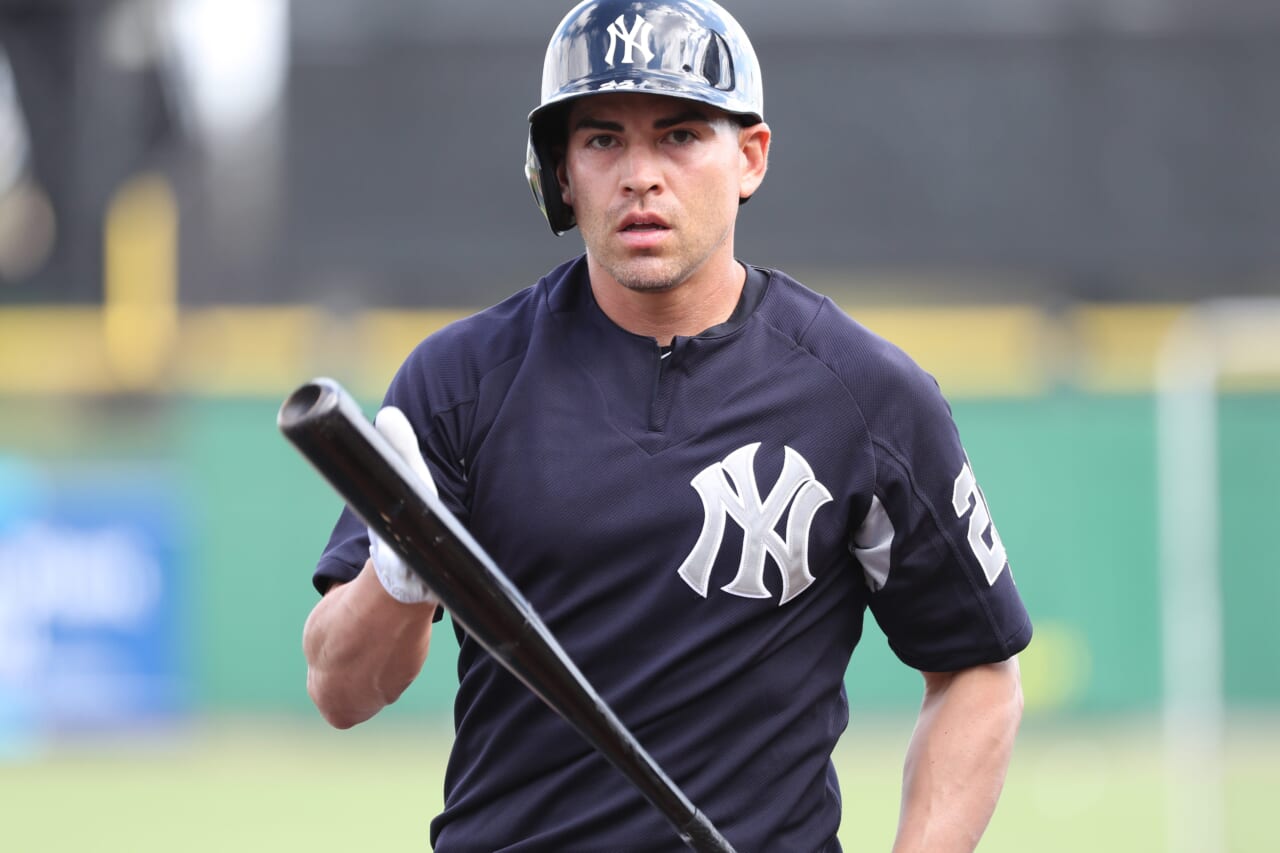 Any positive news surrounding New York Yankees outfielder Jacoby Ellsbury is big news these days, and after his latest injury, there has been nothing but negativity.

Ellsbury was on track to finally earn playing time in 2019 before he went down with plantar fasciitis. The foot ailment makes it hard to run as needle-like pains shoot through the arch of the foot. Several weeks of recovery time have awarded Ellsbury with the ability to run, making his return realistic early on in the season and avoiding the injury list.

It’s yet to be seen if the Yankees will bring him to Tampa to participate in spring training or if they will elect to hold him out until the regular season. Ellsbury hasn’t played in a game since 2017, which will require him to shake off the rust before returning to the starting team.

One positive can be extracted for the Yankees:

However, if the outfielder is placed on the injury list and doesn’t play in the season ahead the Yankees can recoup some of his salary through insurance.

In 2017, Ellsbury batted .264 with seven homers and 39 RBIs. There’s no question that his production has fallen off significantly since his last quality season in 2014. The Yankees signed him to replicate his production in Boston where he was one of the best players in baseball.

Moving forward, all we can hope for is Jacoby to offer some value as a rotational/reserve piece, as it seems his starting days are long gone. Consistent injuries have knocked him back in recent years, and there doesn’t seem to be an end in sight. 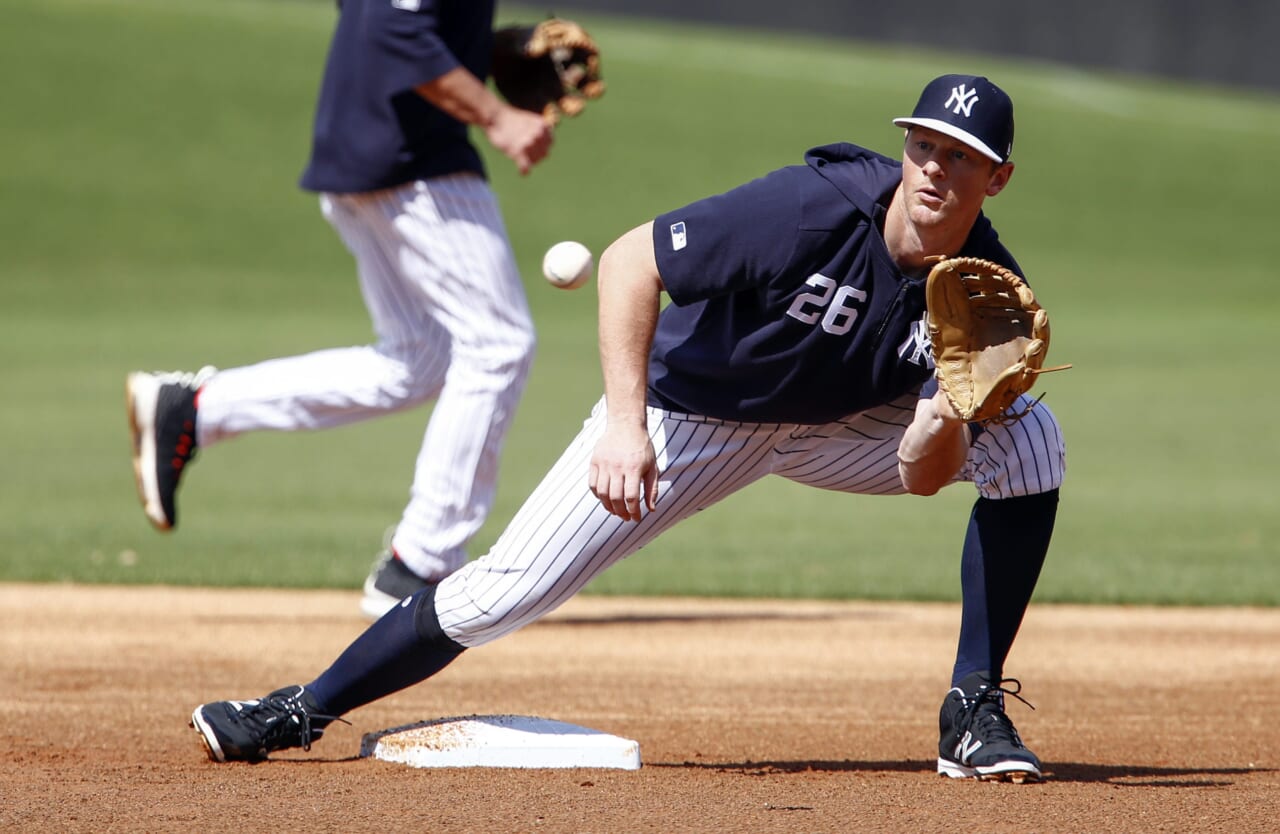 The New York Yankees spent the offseason adding essential non-flashy pieces to a team that won 100 wins last season. Why do I mention the 100 wins? Because some believe that the Yanks absolutely ‘needed’ a player like Manny Machado or Bryce Harper.

Instead of signing big names on decade-long contracts, GM Brian Cashman created a smoke-screen to draw attention away from several valuable veteran players that provided immediate value in the short-term. Players like Troy Tulowitzki and DJ LeMahieu were on his radar and eventually signed contracts with the Bombers.

Tulowitzki will feature as the starting shortstop while Didi Gregorius heals from Tommy John surgery, and LeMahieu’s role has been difficult to interpret. It was thought that the former Rockie would act as a rotational player for a majority of the season, but manager Aaron Boone indicated otherwise, stating that he would, in fact, play in around 145 games.

One of the more interesting comparisons is the Yankees vs Phillies offseason acquisitions:

The Phillies went all-in on massive deals that will haunt them down the line, while the Yanks kept to the short term and provided value in a win-now campaign. Players like Tulo and LeMahieu offer veteran leadership and that extra bit of quality to push the Yankees over the hump.

A realistic point of view:

Realistically, the Yanks could be a 105 win team with one of the best bullpens in baseball and an upgraded infield (defensively). Cashman made the cost-efficient moves without plaguing the team with cap-issues in five years.

DJ’s primary reserve is his hitting, which sounds insane given his numbers – .276/.321/.428. The hit on LeMahieu is where he was batting – Coors Field, a very hitter-friendly stadium. Most are worried that his numbers won’t translate to Yankee Stadium.

But, it’s not all about his batting. He brings three Gold Gloves to an infield that had zero in 2018. They ranked as one of the worst in runs-allowed due to errors. My biggest question is – if DJ is expected to play in 145 games, where’s Gleyber Torres going to feature? 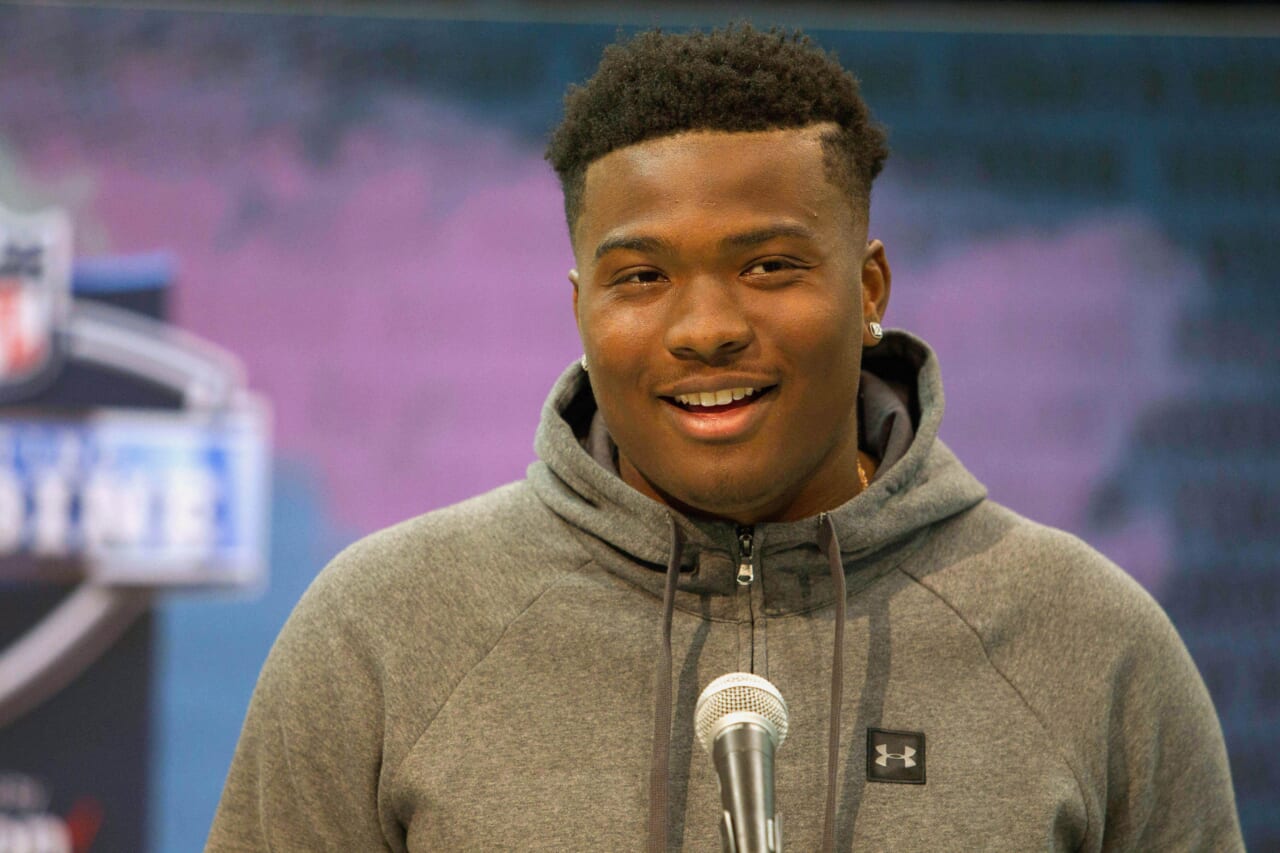 If 50 touchdown passes and 4,831 passing yards didn’t impress you, maybe Dwayne Haskins‘ poise and professionalism will. The New York Giants have emerged as a top team to secure the Ohio State signal caller in the 2019 draft, and there’s no question that Haskins is on board with coming to New York.

The New York Giants would be smart to take a long, hard look at Dwayne Haskins:

The New Jersey native was well-spoken, confident, and bled the white collar attitude of a newfound culture in the Giants’ locker room.

Impressed by Dwayne Haskins. Comes off extremely well. Poised, confident, well spoken. He also said it would be a â€œdream come trueâ€ to play for the Giants and an offense with Saquon, OBJ and himself would be â€œprolific.â€ #Giants #NFLDraft2019

Haskins stated during his NFL Combine interviews, “New York would be a dream for me.” Well, at least we know one quarterback wants to play with Big Blue, alongside special athletes like Saquon Barkley and Odell Beckham Jr.

He was further asked if he believes he can command a room full of men and not just college students. He responded with an astounding, “yes.”

The qualities that Haskins possesses makes up what most teams look for in a passer – intangible and tangible. He has the height, 6-foot-3, the balance, and the arm strength. Throwing for 50 touchdown passes can attest to his accuracy and ability on the field. Now, there are specifics to his game that need refining – footwork, heaviness, movement within the pocket. All of these can be improved with NFL level training.

The anticipation is that whoever is drafted by the Giants this year will have a season to learn behind two-time Super Bowl-winning quarterback Eli Manning. A dream come true for most, especially in a draft class that lacks options.

The Giants want to take the Kansas City method and apply it to their development program. Allowing a rookie QB to sit for a season and learn is essential for growth, just ask Patrick Mahomes that claims he wouldn’t have been the same player if he wasn’t under the wing of Alex Smith.

Of course, it would imply that 2019 would be Manning’s final season, and he is likely fine with the idea given the alternative. He will hold a cap-hit of about $23.2 million this upcoming season, and he will probably be asked to take a pay-cut to make his final year as a starter in the NFL worthwhile.

What could happen if Eli Manning struggles:

Having a young quarterback behind Manning can also act as a safety net in case Manning struggles and age really takes its toll. A player like Haskins could step right in and perform.

Essentially, the Giants have three options in the draft: Haskins, Kyler Murray, and Daniel Jones. I will be reviewing them all, but as of now, Haskins seems like the best fit. Murray has the dual-threat ability to take the Giants’ offense to another level. Jones seems to be the odd-man out but resembles Manning too much to be tossed to the curb – Big Blue always finds a way to retain Eli, whether it be him or a clone. 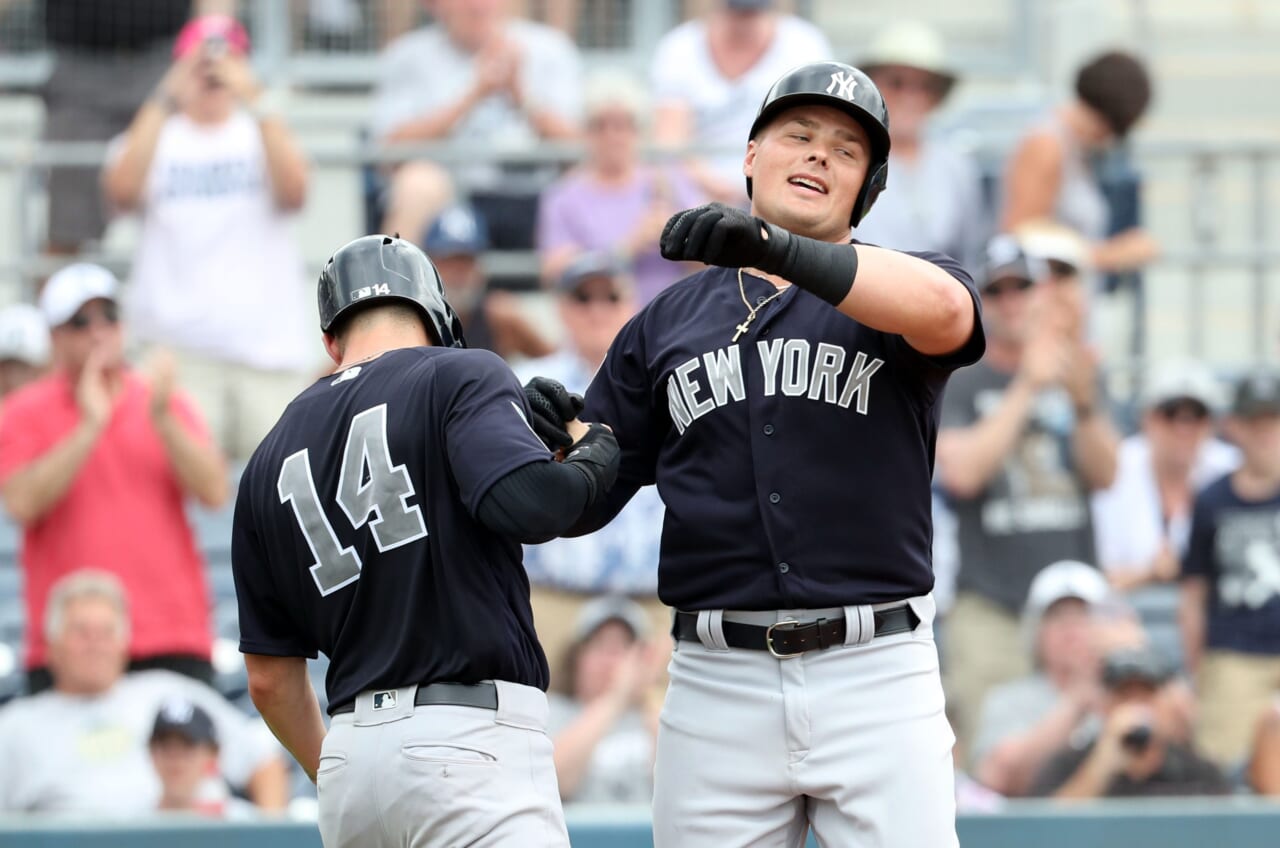 The New York Yankees have seen massive improvements from some of their more questioned players – first baseman Greg Bird being one of them. Two years of sub .200 hitting and injury spells have erased what was once a promising start to his career.

This spring, Bird has shown flashes of offensive productivity, not to mention his above-average defensive abilities. But, the fact of the matter is that Bird simply hasn’t been consistent enough to warrant a realistic opportunity to be the opening day starter.

When the Yankees acquired Luke Voit from the St. Louis Cardinals last season, nobody expected him to hit .333 and launch 14 homers in 39 games. Before being traded he was hitting a putrid .182 with one homer in eight games. Something about the Pinstripes elevated his game, as it does with most – take a look at Troy Tulowitzki, a player that hasn’t stepped foot on a field since 2017.

Inevitably, Voit has earned the starting role at first base despite being an average defender. Bird offers more in that sense, but the Yankees aren’t willing to give up Voit’s run production for a slightly better-graded defender.

What will the New York Yankees do with Greg Bird?

If Voit does end up starting the season at first, we can expect Bird to spend time in triple-A. At least at the lower level, he can continue building on his form and reigniting a developmental halt. If he can regain the trust of manager Aaron Boone and prove that he can be a consistent offensive option, there’s a chance he could legitimately compete with Voit at first base.

As the great Bert Lance once stated, “if it ain’t broke, don’t fix it.” This directly applies to what most are referring to as a “position battle,” when it’s more of a “Greg Bird” saving himself battle.

One of the more underrated aspects of Voit’s game is his durability, not to mention his power. His slash of .333/.405/.689 was uncharacteristic for the slugger. He also earned a 194 wRC+ with the Yankees, which lands in the “incredible” category. His ability to avoid injury yet elevate his game is very attractive and will likely play a big part in his locking down the first base position in 2019.